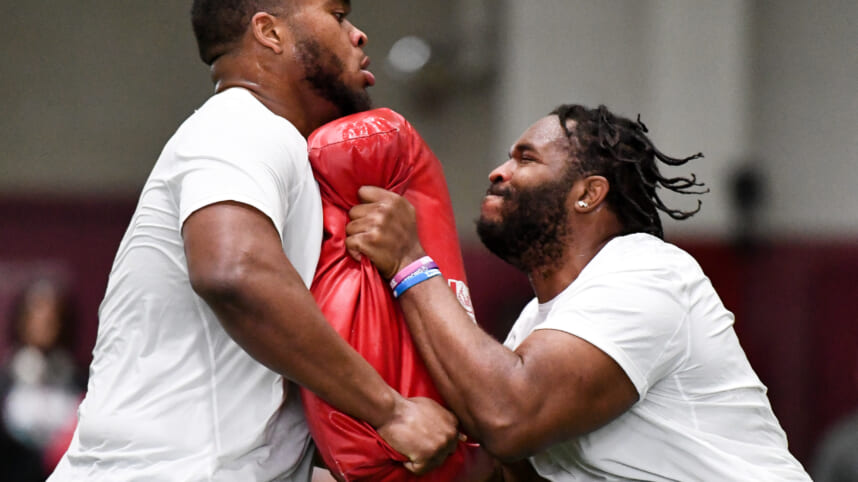 The New York Giants have suffered a myriad of offensive line injuries to start the 2022 off-season. Left guard remains a liability, with Shane Lemeiux suffering a foot injury against the New England Patriots last Thursday and Ben Bredeson going down with a right arm issue during Thursday’s practice.

Having already lost a few players, including Matt Gono, who was forced to leave the team due to a medical issue, the Giants made a few corresponding moves on Friday to add competition.

General manager Joe Schoen brought in Chris Owens, an undrafted rookie out of Alabama who was recently cut by the Steelers, and Josh Rivas, who the Giants waived on August 14 before the injuries began hitting.

Owens is a 6’3″, 305-pound lineman, having played at multiple spots for Alabama. He started in 20 games last season, including 12 at right tackle and one at center. With that type of experience on an NFL-caliber collegiate team, his transition to the NFL shouldn’t be too tumultuous. However, given he was an undrafted free agent, his ceiling is undoubtedly capped.

On the other hand, Rivas is a 6’6″, 317-pound lineman. He was originally signed as a rookie UDFA back on May 12, playing 46 games with 23 starts over four seasons with Kansas State. He didn’t allow a single sack over 362 pass-blocking reps in 2021, showcasing some potential at the next level.

In the absence of several players, the Giants announced that reserve guard Max Garcia would start at center. Several linemen won’t participate in Sunday’s preseason game against the Cincinnati Bengals. The expectation is that quarterback Daniel Jones will be available on the field for the first series, but if the coaching staff feels as though his health is in trouble, they will likely pull him immediately.

After seeing what happened to Zach Wilson on the New York Jets last weekend, keeping him in for one series too long, I imagine the Giants will be extra cautious with their starting quarterback moving forward.

The Giants waived wide receiver Keelan Doss and defensive tackle Christopher Hinton to add the two offensive linemen. Doss has two years of experience at the NFL level, recording 133 yards as a rookie back in 2019 with the then Oakland Raiders. He hasn’t caught a reception in two years, and given the performance of Richie James and Collin Johnson in training camp, Doss was a longshot to make the roster anyway.