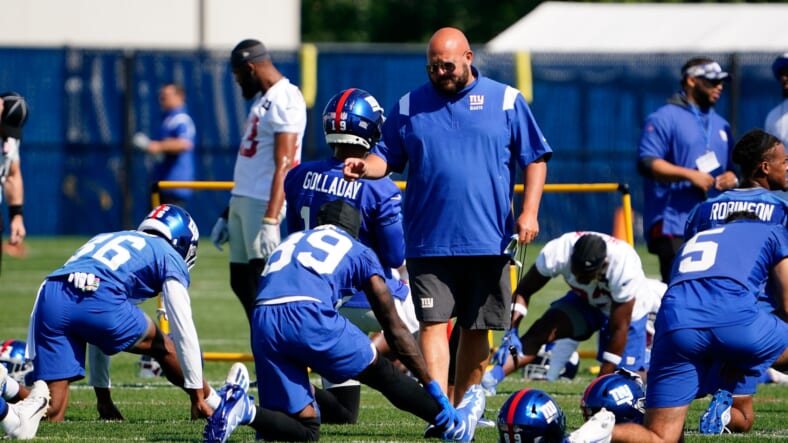 The New York Giants enjoyed their second day of training camp on Thursday afternoon, getting off to a good start under new management. General manager Joe Schoen and Brian Daboll have instituted new rules and regulations for the Giants, with the feeling around camp being more upbeat and exciting.

One of Brian Daboll’s more intriguing hires was Mike Kafka, a former offensive assistant with the Kansas City Chiefs. Kafka is known for his assistance in developing superstar quarterback, Patrick Mahomes.

Coming from an offense that has all the modern bells and whistles, Kafka is expected to revolutionize the Giants’ offense alongside Daboll. So far, he’s made a positive impression during camp, communicating efficiently with quarterback Daniel Jones and the team’s playmakers.

“He’s been on the headset with Daniel (Jones) and he’ll be doing that through camp,” Daboll said of Kafka. “As we get closer to (Week 1), we’ll sit down and discuss it.

Running back, Saquon Barkley has had a tumultuous past two seasons, but he feels like his usual self again after a year removed from an ACL tear. Barkley is willing to do whatever it takes to return to his normal self; the Giants’ new offense will likely utilize him in many unique ways.

Specifically, we should expect to see Barkley far more involved in the receiving game, as displayed in multiple clips the past two days.

“I just want to be a versatile player and do whatever I can to help the team win.”

Barkley is finally in a good routine, but his major hurdle is remaining healthy moving forward.

“Everything happens for a reason. The adversity, the injuries that were put in my way…God’s got a bigger plan and it’s all going to work out.”

The Giants scared Kadarius Toney straight this off-season by floating the potential of a trade. Since then, he’s been 100% committed to the team, and head coach Brian Daboll has returned the favor.

Daboll is known for his ability to create relationships with players, as seen on Thursday morning when he blasted Toney’s music over the loudspeakers to the entire team and fans.

That little sign of respect can go a long way toward building a positive connection with Kadarius, who has the qualities to be one of the best receivers and football.