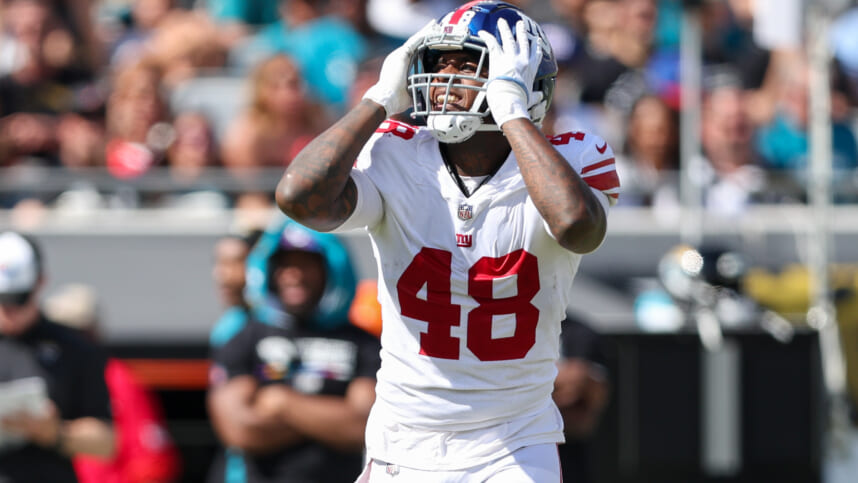 He has accumulated 399 snaps to this point, nearly mid-way through the season. However, his snap count significantly decreased to by far a season-low a week ago.

After playing at least 68% of the Giants’ snaps defensively over the first seven games of the year, Crowder played just 34%, 22 snaps a week ago.

On the year, he has 39 total tackles but has not made a ton of splash plays. He has two quarterback hits and tackles for loss. Also, just one sack, pass defended and forced fumble.

Is it Micah McFadden’s time for the New York Giants?

The player who looks to be taking Crowder’s reps is rookie fifth-round draft pick, Micah McFadden.

McFadden, only playing a total of four snaps in Weeks 5 through 7, saw a big rise in playing time in Seattle last week. The first-year linebacker played 27 snaps, tied for the second-most McFadden has had to date.

With that playing time, McFadden did well for himself, proving that he should have a future role for the Giants’ defense on the second level.

In last week’s showing, he had four total tackles, one tackle for loss, a sack, and a quarterback hit. As a result of the success, McFadden was named one of the top rookies of the week for PFF.

With McFadden’s promising game, as such a young player, and at a position that could use more, McFadden should remain a starter for the Giants’ defense at linebacker in Crowder’s place.