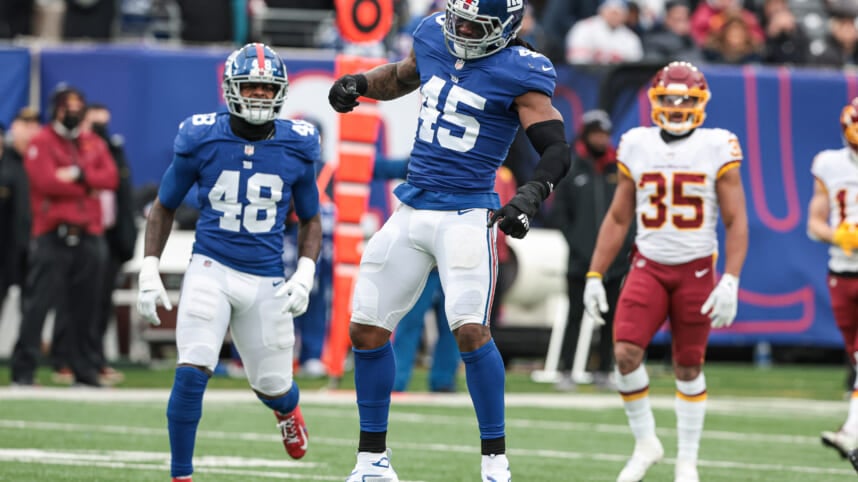 After a brief 2021 stint with the New York Giants, linebacker Jaylon Smith is back. He was signed to the team’s practice squad yesterday.

In correspondence with the move, the Giants let go of offensive linemen KC McDermott from the practice squad.

Could Jaylon Smith be elevated to the New York Giants active roster?

It is no secret that the Giants have had moving parts at linebacker. The team let go of the lone experienced veteran it had, Blake Martinez, right before the start of the season. Rookie Darrian Beavers was playing himself into a significant role before a season-ending injury.

Knowing a boost could potentially be given to the Giants linebacker group when someone of Smith’s pedigree signs to the practice squad, it leads one to wonder if he could be called up to the active roster.

In the past, Smith’s impeccable talent has been on display, whether it be at Notre Dame or with the Dallas Cowboys. Unfortunately, though, after awesome 2017 and 2018 seasons, Smith has rapidly declined.

Smith is still only 27 years old. The seventh-year linebacker has played in 74 games. He appeared in 68 of those games with the Cowboys before being released during last season. Smith then played two games with the Packers before they let him go, which led to him joining the Giants.

In four games played with the Giants in 2021, Smith had 19 tackles, a sack, pass deflection, and quarterback hit. It will be interesting to see how things play out for Smith with the Giants here.