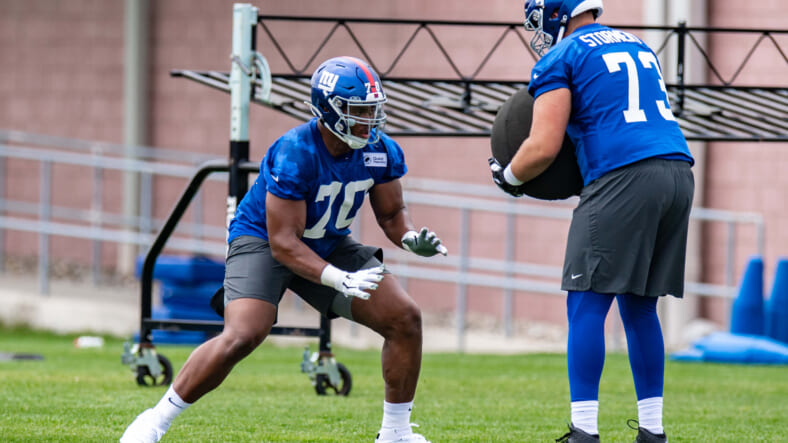 The New York Giants are filled with premium draft picks in the trenches entering the 2022 season. Offensive tackles Andrew Thomas, Evan Neal, and defensive linemen Kayvon Thibodeaux and Leonard Williams were all top-seven picks. Also, along the defensive front, Dexter Lawrence was another first-round pick and Azeez Ojulari a second.

All of these players have attained some sort of prior success at the pro and collegiate levels. As a result, it has made some of the battles throughout this training camp worth noting. Especially when it comes to the Giants’ two top-seven selections this year, Thibodeaux and Neal.

Leonard Williams on Evan Neal and his potential with the New York Giants:

Following yesterday’s practice, Williams met with the media. When asked about Neal and what he sees in him, Williams had nothing but great things to say. Williams stated, “Evan Neal, he is going to be a great player, and it’s fun going against him.”

Going against a talented, proven eight-year veteran in Williams should only help Neal in his early development. Neal himself has the physical and athletic ability to become a great player and foundational piece to the Giants’ long-term future. Right away as a rookie, the expectations are fairly significant for the seventh overall pick.

As former top-six picks, Daniel Jones and Saquon Barkley are entering pivotal years. If Neal can provide a substantial immediate impact similar to Tristan Wirfs and Rashawn Slater over the last two years, it could go a long way for the backfield of the Giants.

With his first draft class headlined by elite linemen Thibodeaux and Neal, after years of struggling, general manager Joe Schoen could set the Giants up for success for years to come.