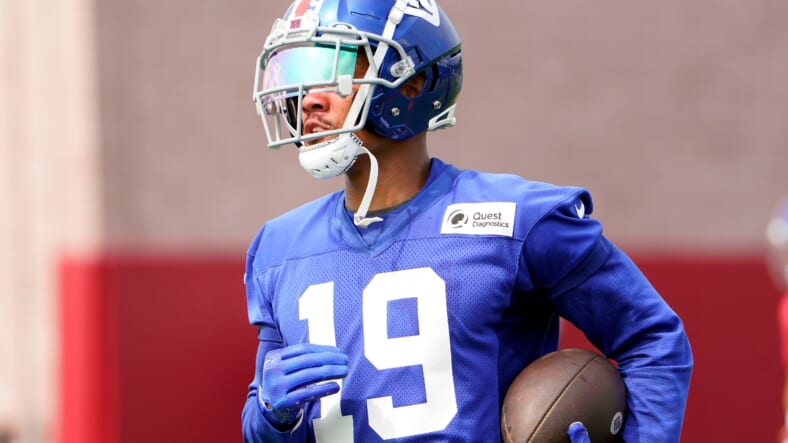 Even with a surprising 2-0 start in a new era of New York Giants football, there are still problems in-house.

Despite Sunday’s win, one of the key points to take away from Week 2 for the Giants was the drama surrounding wide receiver Kenny Golladay.

In the Giants’ most recent game, Golladay played just two snaps. Although he played a lot more for the Giants in the first game (77% of the offensive snaps), Golladay finished with just two catches for 22 yards.

Following what was a disappointing first year with the Giants in 2021 signing a huge contract, the chances seemed slim that things could go worse in year two. Well, in just two games, that improbable likelihood has somehow been the case.

Reports surfaced right after the win Sunday that Golladay was out of the locker room in no time after the game. It led to speculation on his future with the team.

Giants receiver Kenny Golladay voices his frustration to the media:

Yesterday, Golladay met with Giants reporters and discussed his situation. The 28-year-old wide receiver had this to say:

“Of course I don’t really agree with it. Or like it. But I can only control what I can control, which is come to work every day.” “I should be playing regardless. That’s a fact.” “I came here to play. I’m pretty sure they’re also paying me to play. I guess they want to see more or get whatever situated on their end. I just keep doing what I got to do as far as coming in each day.” “I’m not here to be friends with coaches. They’re just co-workers to me.”

Some pretty bold comments for a player who has fallen far short of the contract he signed just a year ago. Also, the sounds of someone whose tenure with the Giants seems inevitably bound to end in no time.

With a brand new and needed culture for the Giants under Joe Schoen and Brian Daboll, buy-in has got to come from every player, let alone one of the highest paid on the roster. As long as the Giants keep winning football games, they cannot worry about Golladay’s frustrations.