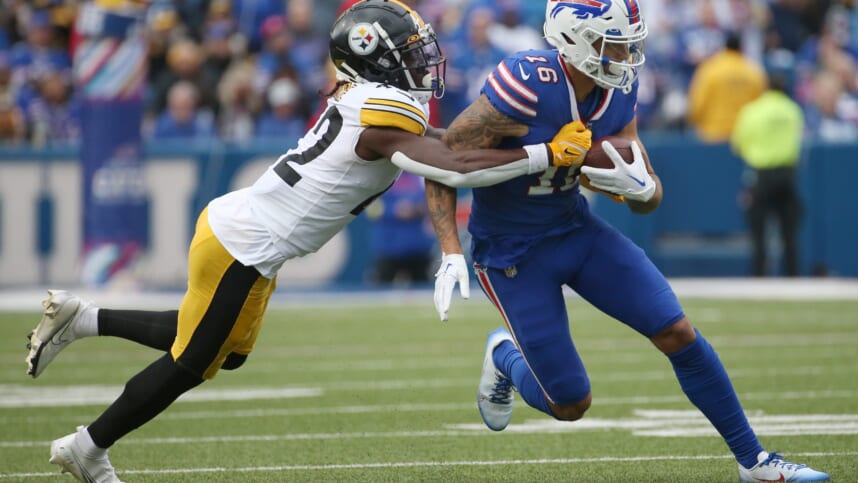 Following the trade deadline, with no significant addition made to the wide receiver position for the New York Giants, general manager Joe Schoen has still remained active. With the position such a glaring need, reinforcements can only help, and a recent move was made.

Schoen and Brian Daboll added a player that they have recent familiarity with — Isaiah Hodgins. Hodgins, drafted by the Buffalo Bills in 2020, spent two years with Schoen and Daboll. With Daboll as the offensive coordinator, he and Hodgins obviously have an established rapport.

Size is a big plus with Hodgins. He is over 6-foot-3 and a half and roughly 210 pounds. Hodgins is in his third NFL season and recently turned 24 years old.

As a rookie, multiple injuries caused Hodgins to not appear in a game throughout the 2020 season. Since, however, he gained minimal playing time, buried at a position with Stefon Diggs and Gabe Davis. In 2021, Hodgins played in just one game. So far this year, he did play in two games and see six targets come his way. Hodgins hauled in four of those for 41 yards. The team ended up waiving him earlier this week.

Hodgins has only played 20 snaps in his pro career. He certainly has not proven a ton but has the size, youth, and experience with Daboll and Schoen to potentially be a reliable depth receiver for the Giants in the midst of their second-half run to the postseason.