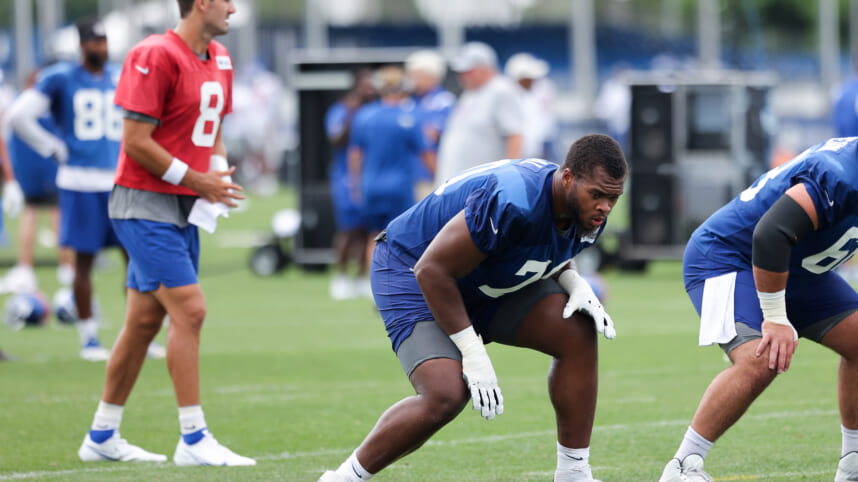 The New York Giants drafted Evan Neal seventh overall to be a difference maker up front for their offense. So far in training camp, the rookie offensive tackle is showing the potential he has that led him to being drafted so high.

Both coaches and teammates of Neal have had some promising things to say about him throughout camp.

Neal met with the media following practice Friday. He spoke on his progress while in the early phases of his development, “At the end of the day, I’m definitely not a finished product, but I’m getting better and better every day. I belong here, I belong in this league. I’m going to win reps, I’m going to lose reps. That’s all a part of it.”

The New York Giants haven’t even tapped into Neal’s potential:

Even with his talent physically and athletically, as a 21-year-old, Neal still has room for growth. On how he can improve, Neal stated, “The preseason games and everything and so forth are just extra experiences that I’m going to get under my belt, and I’m going to learn from all those mistakes and learn from the things that I need to get better at.”

In particular, there are aspects to Neal’s game technically that can be refined, which he spoke on. On some of those specific things that need work, Neal said, “set angles, hat placement, and my base… things that are definitely going to help propel my game to the next level.”

Neal is a young player with exceptional skills and physical ability. It is encouraging to hear him speak about the things he can still improve on to be the best player possible. With his talent level, Neal has a chance to be a key asset to the Giants for years to come.