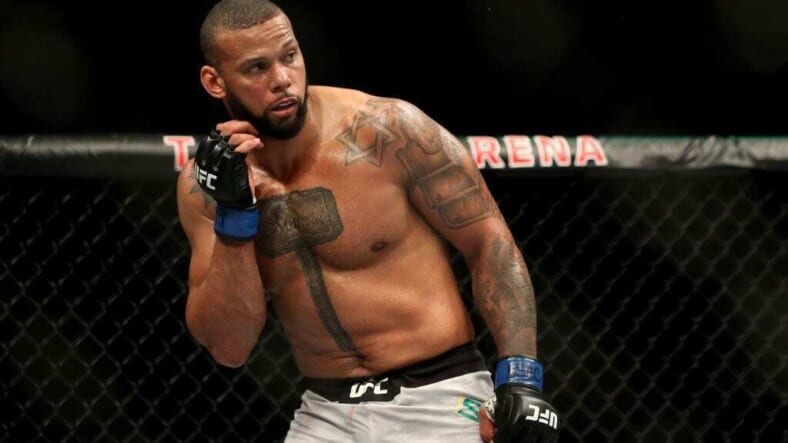 Tomorrow night, the UFC returns for their thirteenth live event at the APEX. In the main event of the evening, Thiago Santos (21-7) will take on Glover Teixeira (31-7) in a battle of two top ranked light heavyweight contenders.

Then it was supposed to take place in early October on Fight Island. However, a battle with COVID-19 for both men pushed the fight back twice. That’s how we landed on the two headlining the UFC Vegas 13 card.

However, due to the fight being pushed back a few times, Blachowicz has found himself a new opponent. The UFC is planning on booking Blachowicz against middleweight champion, Israel Adesanya. Thus, the winner of tomorrow night, will have to wait their turn.

The turn of events makes you feel really bad for both men. Neither one of them could control getting sick, but because of the delays, a sexier fight for the UFC has appeared. While tomorrow’s fight is still big, the significance has gone down a little for the UFC.

I have been very excited about this fight for a while. If you would have asked me who I thought was going to win about a year ago, I would have told you that Santos would win easily. Santos looked extremely good in his title shot against Jon Jones.

He fought that fight essentially on one leg after tearing his knee apart. Teixeira is 41 years old, but somehow he’s turned his career around. Four straight victories for the former title challenger have put him right back in the UFC‘s title picture.

In my opinion, Teixeira needs to try to grapple tomorrow night. He can hold his own on his feet, but a fully healthy Thiago Santos is a tough guy to deal with when it comes to striking. I’m expecting Teixeira to try to use his wrestling to get the fight to the ground.

However, Santos has proven that he’s not the easiest person in the world to get to the ground. I think Santos is going to be able to keep this one standing, and I think he’s going to make a big statement tomorrow night about why he should be the next UFC title challenger.

Prediction: Thiago Santos by TKO – Round 3