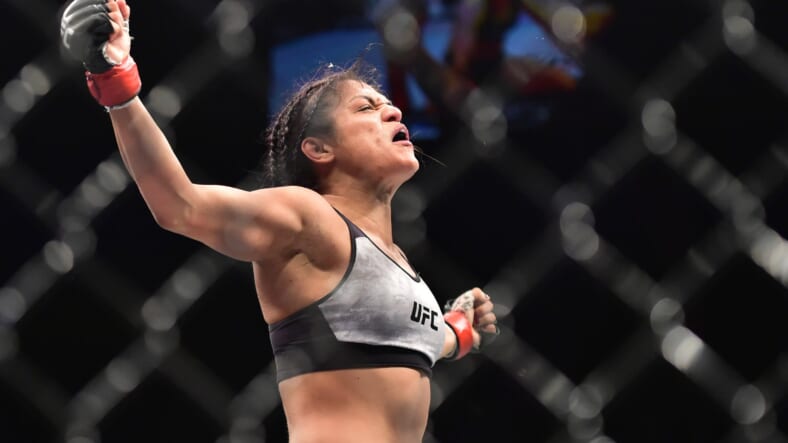 The fight will take place on November 21st at UFC 255. The co-headliner that night is the women’s flyweight title fight between Valentina Shevchenko and Jennifer Maia. This is a big matchup for both ladies who have their eyes on climbing the ranks.

We just saw Chookagian a few weeks ago when she took on Jessica Andrade at UFC Fight Island 6. Chookagian was looking for his second consecutive win as she was hoping to get another shot at UFC champion, Valentina Shevchenko.

However, she ran into a buzzsaw in Andrade. Despite looking like the much bigger fighter, Chookagian was bullied in the matchup. Late in the first round, Andrade landed a vicious hook to the body and a follow up that closed the show.

It was a devastating loss for Chookagian. Now, she will look to get back into the win column with a victory over Calvillo. With Calvillo being ranked fourth in the division, a win would put Chookagian right back into the title picture.

Cynthia Calvillo will be making her second appearance in the UFC‘s flyweight division. She made her debut back in June when she headlined a card against former top contender, Jessica Eye. That night, Calvillo used her wrestling to get the victory.

At the time, Eye was the top ranked flyweight contender in the UFC. It was a big statement for Calvillo to pick up the victory that night. If she’s able to defeat Chookagian it would give her two wins over two top contenders in the flyweight division.

Whoever comes out on top at UFC 255 has to be in the title picture. Calvillo to me has more to gain from this matchup since she’s already coming off of a win. Chookagian has the most to lose however, given that if she loses to Calvillo she would be on a two fight losing streak looking at a steep climb back up the division.