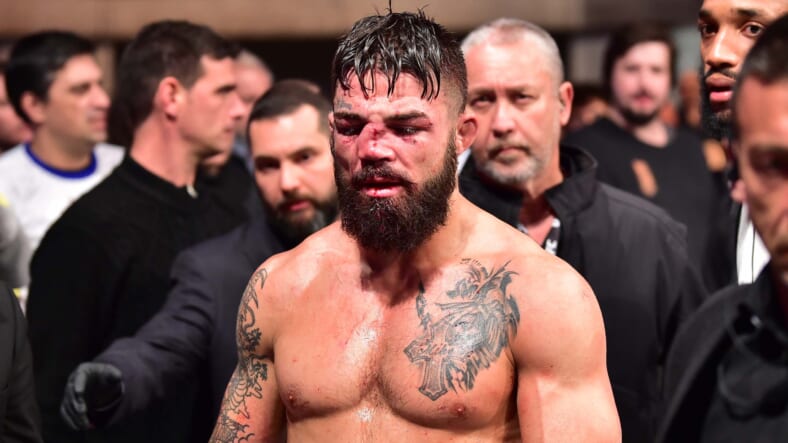 Tomorrow night, one of the more interesting characters in MMA is returning to fight at UFC 255. That character would be Mike Perry (14-6) who is set to take on Tim Means (30-12-1) on the main card tomorrow night.

Perry was originally supposed to face Robbie Lawler tomorrow night. However, Lawler had to pull out of UFC 255 with an injury and Means stepped in on short notice to take the fight against Perry.

Very early this morning, Perry started tweeting out issues about his weight cut for UFC 255. In one tweet, Perry even said, “Maybe I should just lay the gloves down. I donâ€™t want it. Iâ€™m just in over my head with this weight.”

All morning there have been questions on whether Perry was being serious or if he was faking. However, we learned today at the weigh ins that Perry’s struggle were obviously very real.

Perry stepped to the scale today and told the commissioner, “Baby, we not even close.” While standing on the scale, Perry’s weight was called out at a staggering 175.5 which is 4.5 pounds over the welterweight limit. As of now, the fight is still on for tomorrow night.

For what it’s worth, Tim Means did successfully weigh in for UFC 255. Going on the assumption that the fight is still going to take place tomorrow night, it just got even more difficult for Mike Perry.

For Perry to be successful in this fight, I figured he would have to use his wrestling. I really don’t see him outstriking Means over three rounds unless he’s able to land something massive and finish Means.

I think when the cage door closes, Mike Perry is going to show his toughness tomorrow. He’s going to try to come forward, but I don’t think his cardio is going to hold. I think Means picks him apart over the final two rounds and takes a decision or a finish in this one.