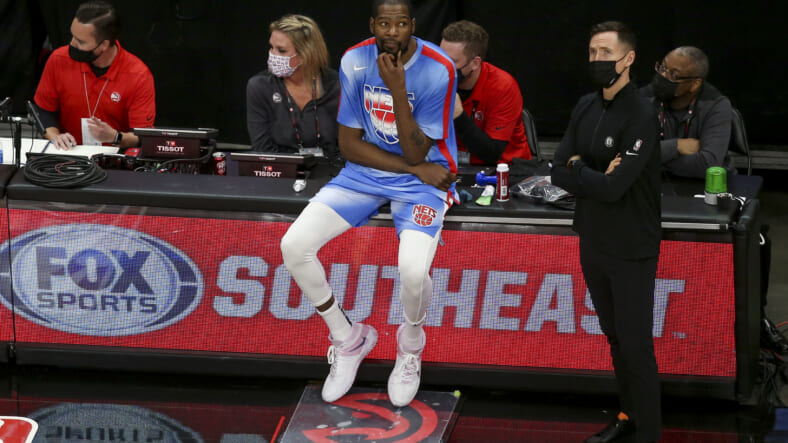 Steve Nash still enjoys the Brooklyn Nets ownership’s support. But how long that will remain is one of the questions that will hover above the organization after Kevin Durant raised doubts about its ability to build a championship culture during his failed trade demand.

Those doubts are getting louder by the day after the Nets started their preseason schedule with two blowout losses. The decibel reached fever pitch when Nash was booed during his introduction in the Nets’ record-setting open practice at Brooklyn Bridge Park on Sunday.

A quarter of the 8,000 fans, the highest attendance in five years, reportedly showed their displeasure about Nash during the team’s introduction.

Nash remained unperturbed, hoping for a total buy-in from his team.

“The guys have worked really hard, they’re locked in to all the details. We’re trying to form an identity and understanding each other, coming together. It’s a challenge but they’ve worked really hard. If we stick with it then we’ll be a great team.”

Nash replaced Kenny Atkinson two seasons ago despite having no prior coaching experience. The Nets are banking on his ability to handle egos in the locker room, but it has yielded underwhelming results. But to be fair, he has not enjoyed the full complement of a healthy roster.

This year, the pressure is on.

Durant is back, but his wandering eye will keep Nash’s seat warmed up all season. No more COVID-19 protocols that will restrict Kyrie Irving’s availability. Ben Simmons has returned to the court up and running, although he’s still not shooting. Joe Harris’ return gives Nash another shooter.

Only Seth Curry and offseason acquisition T.J. Warren are the Nets players whose health status is in question to start the season.

This is the healthiest and arguably most versatile roster Nash will have in three seasons. But if he doesn’t get the total buy-in and Brooklyn goes off to a slow start, the boos are expected to get louder at Barclays Center. And the Nets will run out of excuses to shield Nash.