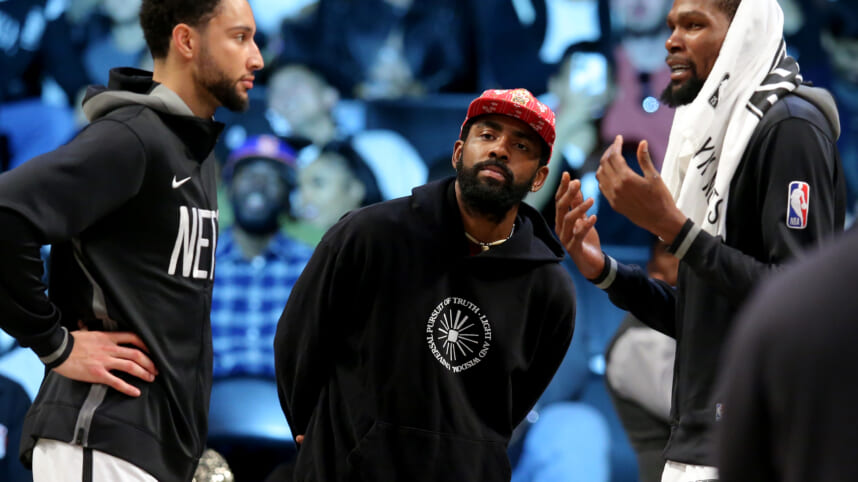 Kyrie Irving sat out Thursday’s preseason game, and the Brooklyn Nets were demolished for the second straight time.

Irving missed the game for a good reason — his fiancée Marlene Wilkerson gave birth to their son Wednesday — as he joined Joe Harris (sore foot) and the still-recovering Seth Curry (left ankle) and TJ Warren (left foot) on the sidelines.

They were sorely missed as the Nets fell to a 109-80 loss to the Miami Heat just three nights after the Philadelphia 76ers, who were without their stars Joel Embiid and James Harden, beat them by 19.

It was unclear to whom he was directing the cryptic post, but the timing was interesting as Kevin Durant was left frustrated after their second consecutive blowout loss.

Durant wanted to leave the organization because of his doubts they could contend in the remaining years of his prime. Although it’s just in the preseason, their two blowout losses could be a bad omen.

Aside from missing four key players, it didn’t help that Ben Simmons, who was playing just his second game after a 480-day layoff, could not shake off the rust this time. He was better in his debut.

Simmons was bullied in the paint on defense and refused to attack the rim on offense.

The supposed third member of the revamped Nets’ Big 3 asked for more time to get his legs back.

Simmons and the Nets need to make it right from within before they can even think of winning.

Irving could be referencing something else, but if the shoe fits, and it is, the Nets have a season to figure this out, or another tumultuous offseason awaits them.