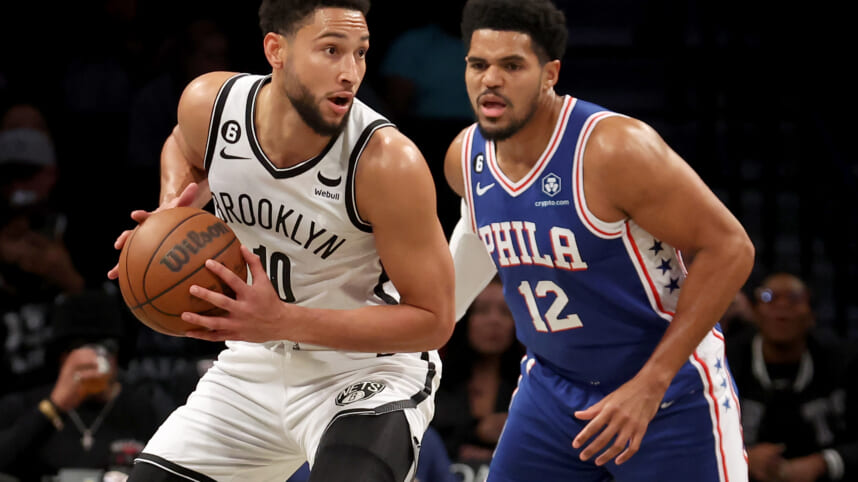 Just a minute and 40 seconds into his first game in 470 days, Ben Simmons caught a wicked bounce pass from Kyrie Irving 15 feet away from the basket. And with one gather step, the new member of the revamped Brooklyn Nets‘ Big 3 soared to a thundering dunk.

The Nets lost, 127-108, to Simmons’ former team, the Philadelphia 76ers, which played without Joel Embiid and James Harden. But it didn’t matter.

It was just a preseason game. But for Simmons, it was a much-anticipated game.

“I’m grateful just to be able to step on that floor. [I] Step on an NBA floor again. I had a lot of fun out there.”

Simmons made a good account of himself even after a long layoff. He finished with six points, four rebounds, five assists and a steal in 19 minutes. He provided a couple of highlight dunks but his best play of the night was a back-of-the-head pass to a rolling Nic Claxton for a slam midway in the second quarter where the Nets nearly wiped a 20-point Sixers lead.

It took some time before Simmons shook off some rust. The Sixers blitzed to a 20-point lead before settling for a 42-26 advantage after the opening quarter.

“I was pleased overall. I think it’s all so new. We got to go through this. Guys need time together. Ben’s playing with a totally different unit than he has in the past, different style.”

Then the Ben Simmons experiment for the Nets clicked in the second quarter, where they outscored the Sixers, 36-23. It was a window to their future, with Simmons’ length and athleticism disrupting Philadelphia’s offense and his court vision fueling Brooklyn’s crisp ball movement.

“It’s going to be ugly at times, but I thought as the half wore on you definitely started to see glimpses of the potential. The way the ball moved. The way they were hounding the basketball defensively. I thought Ben looked pretty good overall and grew into the game through the half.”

But more than just being relieved from the offseason drama that hovered over their future with the organization, they were pleased to finally see Simmons back on the court.

“I was telling him at halftime, when you’re playing with some high-level players, despite what you heard, we’re going to make the game easy for you. And he’s going to love playing with us. He’s going to love getting up and down the floor with us. But for him to be out there for his first day, and for us to experience it with him, is something that we can remember for the rest of the season as something that we got through. It’s day one, highly anticipated. Glad it went his way tonight.”

Simmons sure had fun. Despite his fadeaway jumper going south and his free throws still clunky, Simmons was in a great space in his first game back from a long hiatus.

“It was fun messing up because I know how good we can be. And seeing just different looks and opportunities there with Kevin and Ky and Joe [Harris]. Seeing where they want the ball and just how things are going to work and flow. But the only way you learn is to make mistakes so I had a few out there tonight and I can go back and watch film and say I know what I did wrong and how to fix that. So it’s all a learning process for me so it’s good.”

Durant could relate to Simmons. He sat out his first season in Brooklyn while recovering from an Achilles injury.

“Being away for a year, you get a lot of anxiety not playing. I know I did. Just anxious to see how I’m playing, where I’m going to play, what my role is on the team. But as a fan of the game, Kawhi [Leonard] being back is great for basketball, Jamal Murray being back is great for basketball, all the guys that have been out injured and being able to play again, it’s a great feeling seeing them out there.”

The Nets lost their first preseason game. But to see Simmons play the way he did Monday night was already a big win for the organization.