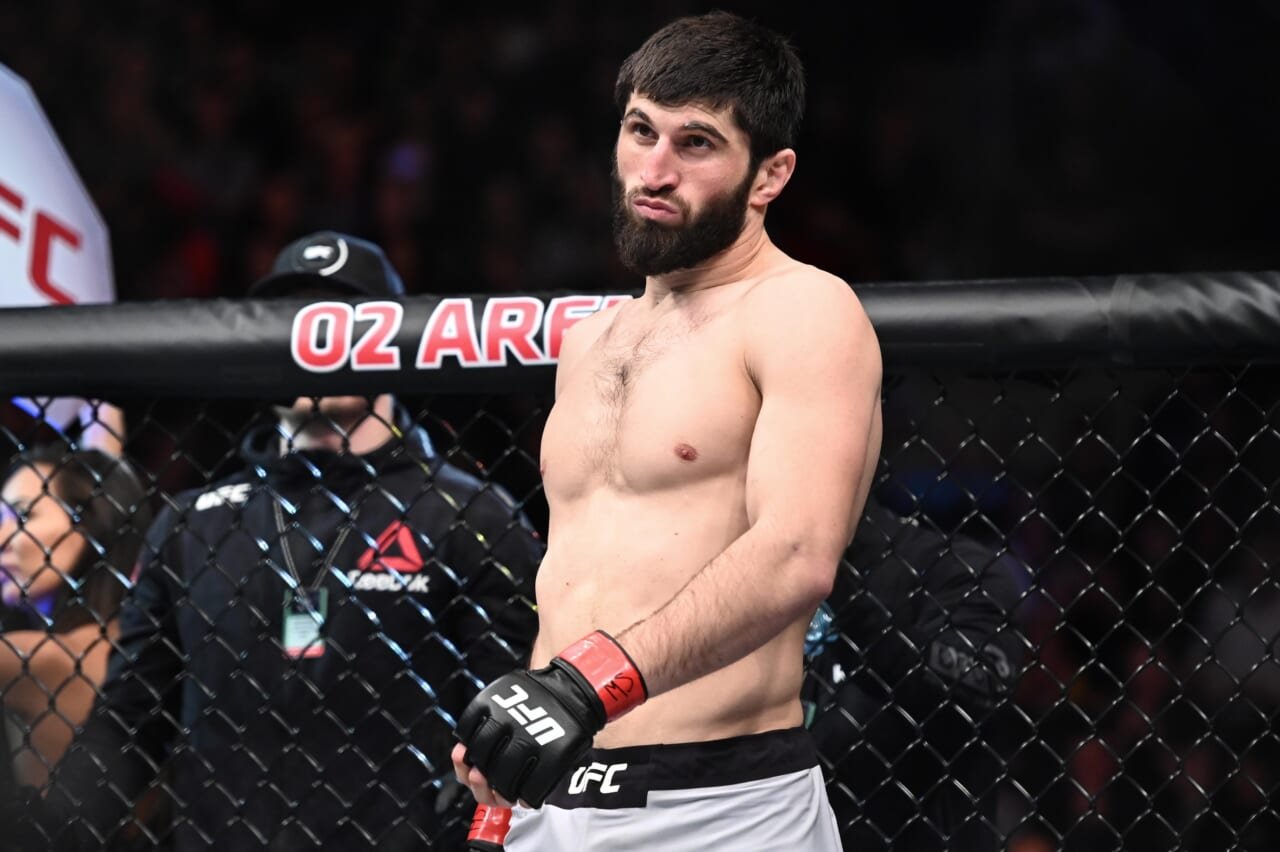 This past Saturday at UFC Vegas 20, Magomed Ankalaev (15-1) and Nikita Krylov (27-8) went head-to-head in a pivotal match in the light heavyweight division. The winner of this matchup would only be a win or two away from a UFC title shot.

In the first round, Nikita Krylov was getting the better of the exchanges. Krylov was using his kicks nicely and his clinch control was impressive. All three judges gave the first round to Krylov. However, after round one, the momentum switched.

Magomed Ankalaev came out very aggressive to start the second round. There was a lot of pressure from Ankalaev and he started working his wrestling. Krylov couldn’t get anything going at UFC Vegas 20 once Ankalaev started going downhill.

Neither man did serious damage to the other throughout the fight. It was a tactical affair that was relatively easy to call once the final bell sounded. It was clear that Ankalaev had won the last two rounds with his forward pressure and his wrestling.

When the judges scorecards were read, Ankalaev won 29-28 on all three scorecards. After losing his UFC debut by a last second triangle choke, Magomed Ankalaev has now won six fights in a row at 205 pounds.

Considering what is currently on the books, I think a matchup in April would provide the perfect opponent for Ankalaev. At UFC 261 in April, Anthony “Lionheart” Smith (34-16) will be taking on Jimmy Crute (12-1).

Smith is currently ranked sixth while Crute is ranked 12th in the light heavyweight division. Whoever wins this matchup would be the perfect next opponent for Ankalaev. I belive this is where the promotion will head. Whoever would win the matchup between the winner and Ankalaev might just be one victory away from a UFC title shot.

In the co-main event of UFC Vegas 20, we saw a matchup between two top eleven contenders in the light heavyweight division. Eighth ranked Nikita Krylov (27-7) took on the eleventh ranked contender, Magomed Ankalaev (14-1).

Ankalaev has been on a roll in the UFC over the past couple of years. The native of Dagestan has now won five fights in a row with the promotion after losing his debut. That loss came to Paul Craig and it came just one second before the final bell.

Out of the last five wins for Ankalaev, four of them have been by stoppage. He scored a knockout over the talented Ion Cutelaba in his last fight which put the rest of the light heavyweight division on notice.

Standing across from Ankalaev was the talented Nikita Krylov. Krylov is actually on his second stint with the UFC. Krylov went 6-3 during his first run with the promotion, but they ultimately let him walk.

After a few impressive performances, the UFC resigned him. Since returning, Krylov has gone 2-2 but his two losses came against Jan Blachowicz and Glover Teixeira. If Krylov was able to pickup the win tonight, he could be getting closer to a UFC title shot.

The UFC Vegas 20 co-main event kicked off with a touch of the gloves. Krylov pushed forward first with a nice body kick. Another body kick slams home for Krylov. Ankalaev takes the center, but Krylov lands a solid shot that he tries to chain into a takedown.

However, Ankalaev defended well at first. Krylov was heavy in the clinch and eventually worked Ankalaev to the ground. Ankalaev was able to use the fence to work his way up to his feet, but Krylov still held control in the clinch.

A nice knee to the body lands for Krylov and the two separate. Ankalaev lands a nice right hand as Krylov comes in. Krylov continued to look for body kicks and then he throws one up top. Ankalaev was doing well holding the center of the cage.

The second round at UFC Vegas 20 started with more pressure from Ankalaev. Krylov throws a nice shot that he tries to transition into a takedown. However, Ankalaev just shrugs him off and goes back to the pressure.

A stiff check right hook lands on Krylov as he advances. The pressure was heavy from Ankalaev, but Krylov was holding his own. Another nice body kick lands for Nikita Krylov. Those body kicks were starting to do a little damage.

Ankalaev catches a body kick and forces a clinch where he lands a massive knee. He followed that knee with a big body kick. Another right hook lands for Ankalaev as Krylov tries to advance. Momentum was building for Ankalaev in the second round.

Ankalaev times a Krylov advance and lands a takedown. Krylov did a good job of controlling Ankalaev’s posture, but he couldn’t get off the ground. The round comes to a close and it’s 1-1 at UFC Vegas 20.

Heading into the final round at UFC Vegas 20 and this fight is up for grabs. The two touch gloves and Krylov starts the striking with a nice body kick. Ankalaev lands a nice check hook as Krylov tries to advance.

Two more body kicks land for Nikita Krylov. A huge right hand for Ankalaev that snaps the head back of Krylov. Krylov shoots in for a takedown but Ankalaev just throws him aside and goes back to the pressure.

Ankalaev then shoots in for his own takedown attempt, but Krylov defended well. Krylov couldn’t get Ankalaev off of him along the fence. Ankalaev uses a beautiful trip to take Krylov down halfway through the round.

It’s do-or-die time for Nikita Krylov here at UFC Vegas 20. Ankalaev pulls Krylov away from the fence and starts throwing a little ground and pound. The round comes to a close with Ankalaev on top. Should be a decision win for Magomed Ankalaev. 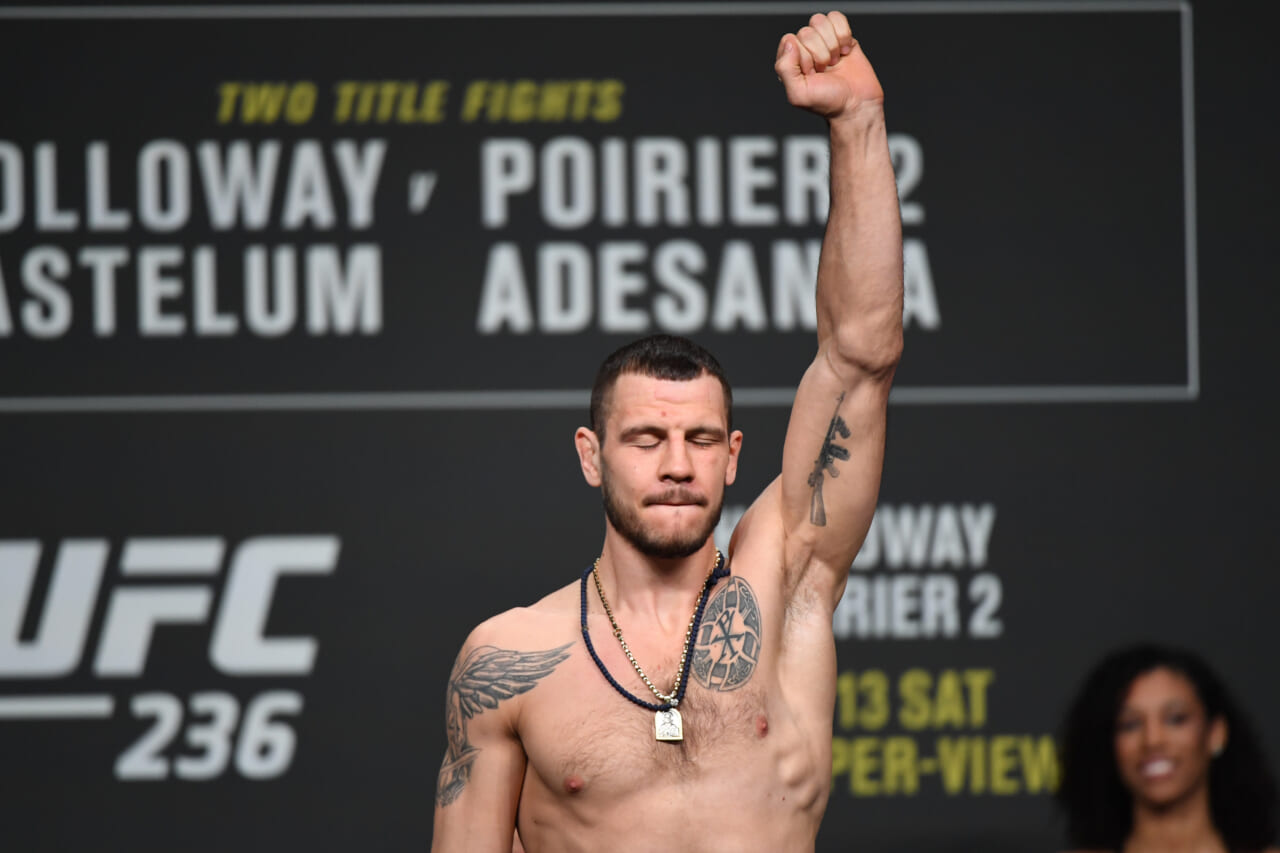 In the co-main event of UFC Vegas 20 we will see a battle between two top eleven light heavyweights. Top contender, Nikita Krylov (27-7), takes on Magomed Ankalaev (14-1) in a fight that promises to be entertaining tomorrow night.

Ankalaev will walk into the cage as the eleventh ranked light heavyweight in the UFC. A native of Dagestan, Ankalaev is 5-1 since he made his debut with the promotion back in 2018. The lone loss was a triangle choke loss to Paul Craig that came literally one second before the final bell.

Since that fight, it’s been smooth sailing for Ankalaev in the UFC. He’s 5-0 with four stoppages and he’s coming off of arguably his most impressive win at UFC 254. Ankalaev took on Ion Cutelaba in a rematch from earlier in 2020.

In the first fight, Ankalaev rocked (or appeared to rock) Cutelaba and the ref stepped in. Cutelaba was irate because he said he was playing possum. The UFC ran the fight back and Ankalaev left no doubts in the rematch knocking Cutelaba out cold.

Standing across from Ankalaev tomorrow night is Nikita Krylov. Krylov is actually on his second stint with the UFC. He made his original debut with the promotion back in 2013. Krylov went 6-3 and the promotion let him walk. After going 4-0 with four stoppages after that, the promotion brought him back.

Since coming back, Krylov has fought four times. He’s 2-2 but his losses are to the current champion and the current number one contender. He’s defeated Johnny Walker and avenged a loss from early in his career against Ovince St. Preux.

The UFC Vegas 20 co-main event is going to be a lot of fun to watch and I’m expecting the fight to take place on the feet. Krylov has good grappling, however, Ankalaev’s takedown defense should neutralize any takedown attempts from Krylov.

With that in mind, I’m thinking about my prediction with this being strictly a standup fight. Both men are well-versed on the feet. With Krylov, I love his creativity and I love his use of kicks. You’ll see some high kicks with some spinning kicks thrown in at UFC Vegas 20.

I was really blown away with what I saw from Ankalaev in his last performance. The speed and power in his striking was impressive, but also his distance control and defense was something to behold.

I really believe that both of these light heavyweights are very evenly matched. I can see both men getting a decision with ranking up points in this one. However, I ultimately believe that Ankalaev will land the more powerful shots and that will allow him to get the win tomorrow night.