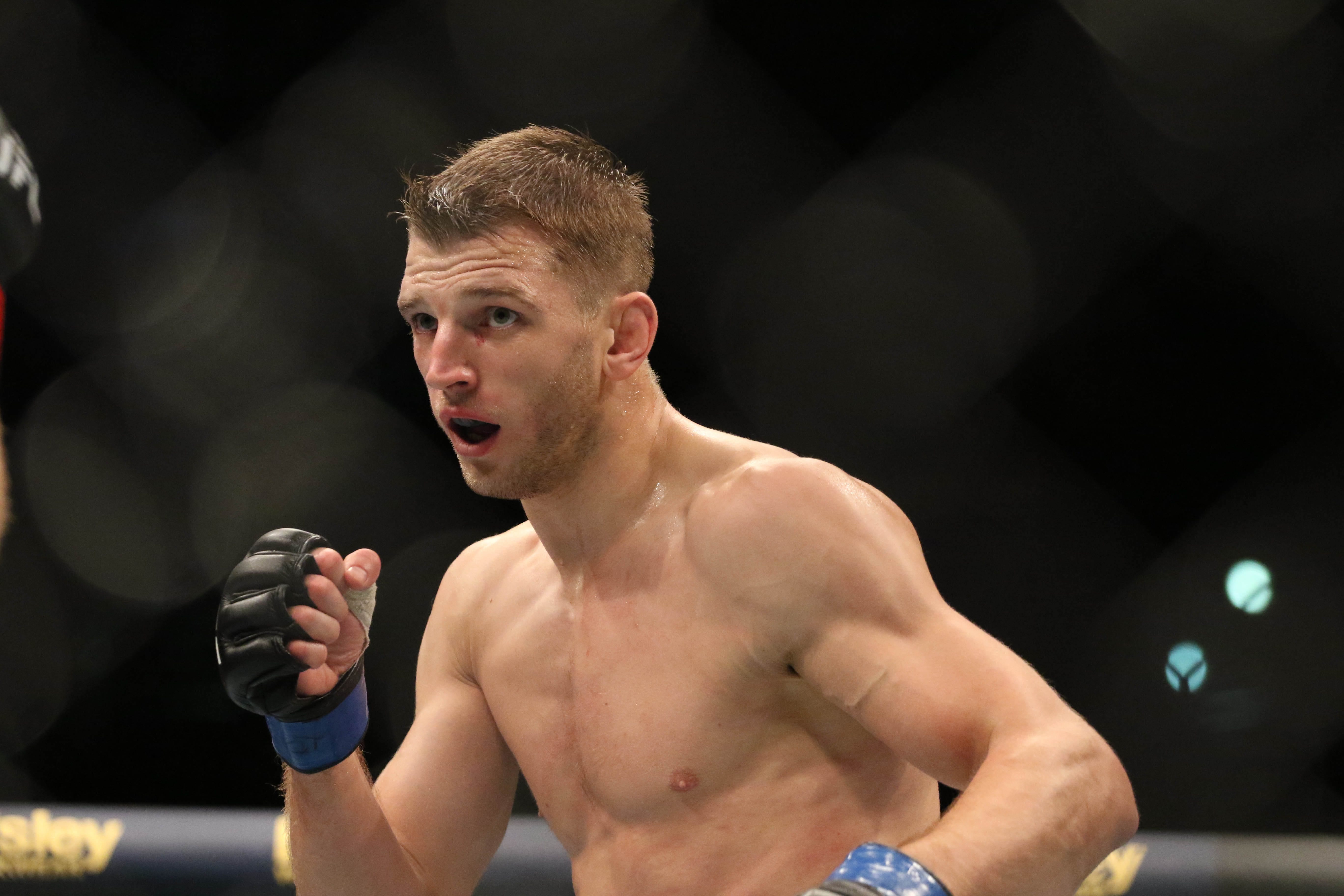 This past Saturday during the prelims of UFC 266, Dan Hooker (21-10) made his return as he took on Nasrat Haqparast (13-4). The fight was considered a risky one by Hooker considering his placement in the division.

Hooker is a top ten lightweight in the UFC and Haqparast is not ranked, yet, he’s viewed as very dangerous. However, Hooker just wanted to get back in the cage after suffering back-to-back losses.

Both men had visa issues getting into the US for this fight, but both showed up on weight for UFC 266 and put on a performance. From the moment the fight started, Hooker was the one pressing forward.

When Hooker lost to Michael Chandler, he was constantly backing up. He made the adjustment in this fight and he was the one putting the pressure on Haqparast. Hooker did eat some shots, but he just kept coming forward.

I was incredibly impressed with how well-rounded of a performance Hooker had at UFC 266. He had good pressure, good striking, and mixed in some beautiful takedowns. All of this added up to a lopsided decision win for The Hangman.

Is Dariush next after UFC 266?

After his big win to get back on track at UFC 266, there was one name on the mind of Dan Hooker and that was Beneil Dariush (21-4-1). Dariush is currently ranked third in the UFC’s lightweight division, but he’s without an opponent.

After picking up six straight wins, Dariush finally got his first big fight against tony Ferguson back in May. Dariush put on an incredible performance as he dominated and controlled Tony Ferguson for fifteen minutes.

Considering where everyone’s at in the division, Hooker makes the most sense for Dariush next. Islam Makhachev is the only guy near Dariush, but he’s tentatively scheduled to face Raphael Dos Anjos at UFC 267. That fight is in trouble due to a knee injury to RDA.

If that fight falls through, perhaps Dariush takes on Makhachev. However, I think a fight with Hooker would make more sense for him. Hooker has a decent following and it’s a better fight for Dariush stylistically. It’s what Hooker wants and it’s the right fight for Dariush. Sign me up!

This is a fight that almost didn’t happen this week as both men had visa issues getting into the US. Hooker struggled to get in from New Zealand given the extremely limitations due to covid restrictions. Haqparast struggled to get back into the US after visiting Germany for his mother’s funeral.

That said, both men were able to make it and their fight will go on at UFC 266. This is a huge fight for Haqparast who will be looking for his third straight win. After losing his UFC debut back in 2017, Haqparast has gone 5-1 in his last six fights.

A win tomorrow night would be massive for his career. However, it won’t be easy as he’s taking on one of the best in Dan Hooker. Hooker is looking to get back on track after back-to-back losses.

That said, those losses came against two of the best in the UFC in Michael Chandler and Dustin Poirier. Hooker is without question one of the better lightweights in the promotion and tomorrow is about getting back on the winning path.

I think this fight is going to be sensational tomorrow night. I think you’re going to see two guys go out there and throw down on the feet. I was incredibly impressed with the boxing that I’ve seen from Haqparast in his recent fights.

His hand speed and accuracy would play well tomorrow at UFC 266. That said, Dan Hooker is a sniper on the outside and he has a much wider range of weapons in terms of his striking arsenal.

I’m really looking for him to use kicks tomorrow and potentially knees as Haqparast tries to close the distance. I think that Haqparast will make it interesting, but a big shot in round two will get The Hangman the win at UFC 266.

Prediction: Dan Hooker by TKO – Round 2

The UFC has finalized a fun lightweight matchup for their PPV card next month. After a report from BJPenn.com, it’s been confirmed that the promotion is planning on having a lightweight contest between Dan Hooker (20-10) and rising contender Nasrat Haqparast (13-3).

The fight will take place at UFC 266 on September 25th. It’s no surprise that Hooker finds himself fighting on that card. With COVID restrictions and quarantine rules in New Zealand, the City Kickboxing fighters like to fight either on the same card or right around each other.

Hooker has said for months that he wanted to fight on the same card as teammate Alexander Volkanovski. The UFC featherweight champion is headlining next month’s PPV when he takes on Brian Ortega.

The surprising part of this announcement is the opponent. Nasrat Haqparast is not the opponent I was expecting for Hooker. Haqparast has won two in a row and overall, he’s 5-2 inside the octagon.

Entering UFC 266, Haqparast will not have a ranking by his name. This is a massive opportunity for the lightweight from Afghanistan. Considering all that’s going on in that part of the world, this is a huge moment for him and his native land.

How quickly things have changed for The Hangman in the UFC. A little over a year ago, Hooker was fighting Dustin Poirier in a headliner inside the APEX in Las Vegas. In the first two rounds, Hooker was beating Poirier to the punch.

In fact, Hooker was outclassing The Diamond for the first couple of rounds. However, Poirier flipped the switch and won the final three rounds to win the decision. Had Hooker won that fight, he might’ve been in line for a UFC title shot.

From there, Hooker welcomed Michael Chandler to the UFC back in January. Hooker was the betting favorite, but Chandler scored a first round knockout that shocked everyone. Now, Hooker has fallen back in the rankings and he’s fighting an unranked opponent.

This is a good reset moment for Hooker. Haqparast is an opponent he should beat and it’s a good opportunity for him to get his momentum back. However, it won’t be easy and you can bet that Haqparast will be more motivated than ever at UFC 266. 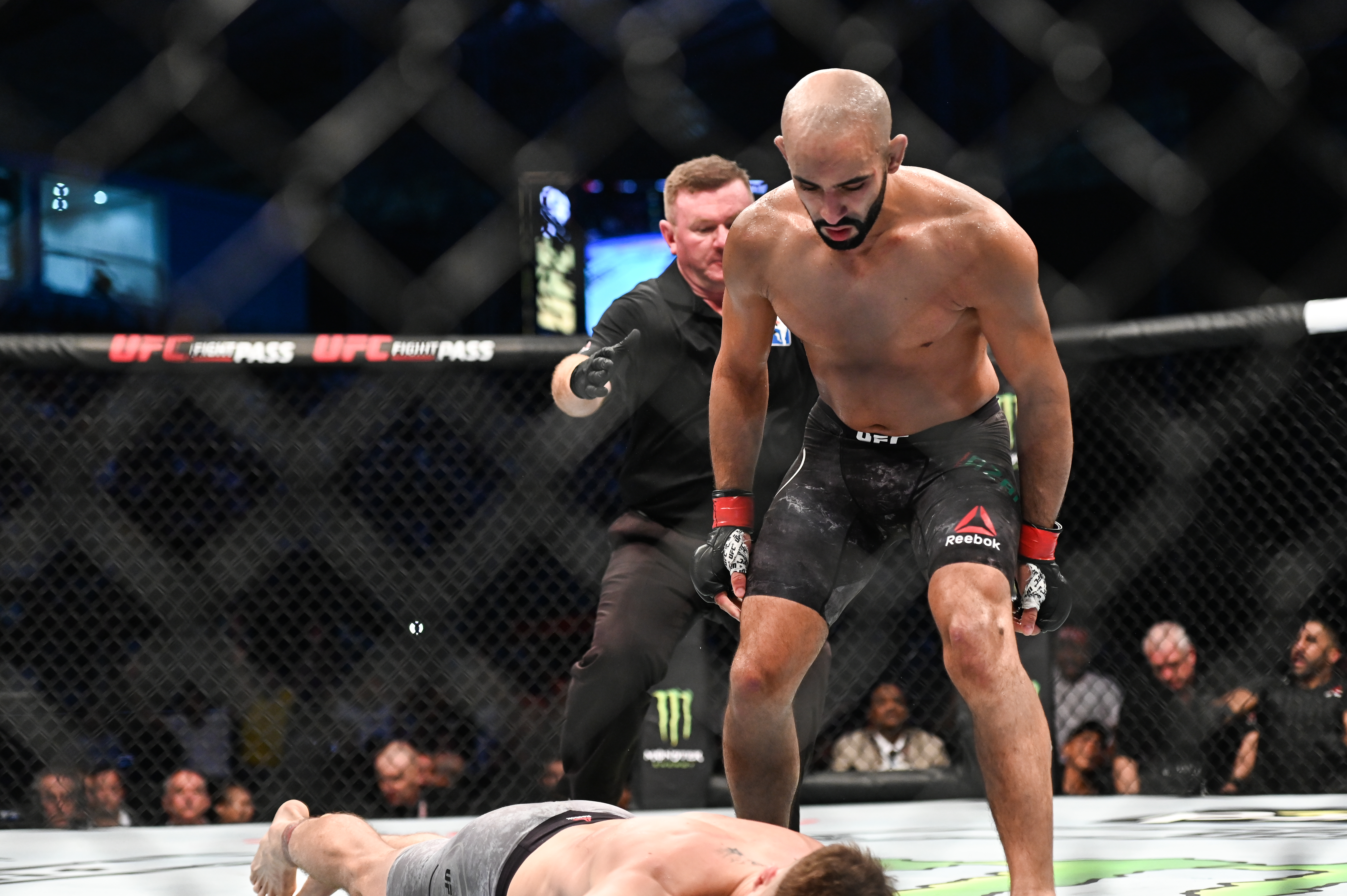 The morning we saw some shuffling in tomorrow night’s UFC 257 card. Originally, Ottman Azaitar (13-0) was scheduled to take on Matt Frevola (8-1-1) on the PPV main card. However, we learned early this morning that the fight was scrapped.

Originally, the assumption was that the fight was scrapped due to a weight cutting issue from Azaitar. Frevola still made the walk to the UFC 257 weigh-ins and he made weight successfully at 155.5 pounds.

With the Azaitar fight scrapped, the promotion shifted gears to get Frevola another fight. Lightweight Arman Tsarukyan (15-2) was scheduled to take on Nasrat Haqparast (12-3) tomorrow night. However, Haqparast came down with an illness and was pulled out.

The UFC has paired Frevola and Tsarukyan for a fight tomorrow night. A couple of hours after all this drama and we are learning more about what happened with Ottman Azaitar. Azaitar’s team posted an Instagram video of his tough weight cut just hours before weigh-ins.

For this reason, many believed it was an issue with his weight. However, the UFC has come out with a statement discussing why Azaitar was removed from tomorrow night’s card.

Their statement reads, “UFC is aware of a recent violation of the health and safety protocols involving Ottman Azaitar. As such, Azaitar has been removed from the safety zone and his upcoming bout against Matt Frevola has been canceled.”

What’s next for the UFC’s Azaitar?

One thing we know for sure is that the promotion takes their protocols extremely seriously. The rules that the UFC has in place are extremely strict and so far, fighters have done a good job of obeying the rules.

That of course changed this morning with Azaitar. Azaitar – Frevola was a very good fight for UFC 257 and now we will not get to see it due to health and safety violations from The Bulldozer.

Dana White announced that Ottman Azaitar has been cut from the promotion due to the violations. He told Farah Hannoun the news after this morning’s ceremonial weigh-ins.

Dana White tells me that as a result of Ottman Azaitar violating the safety protocols, he has been cut from the UFC. #UFC257