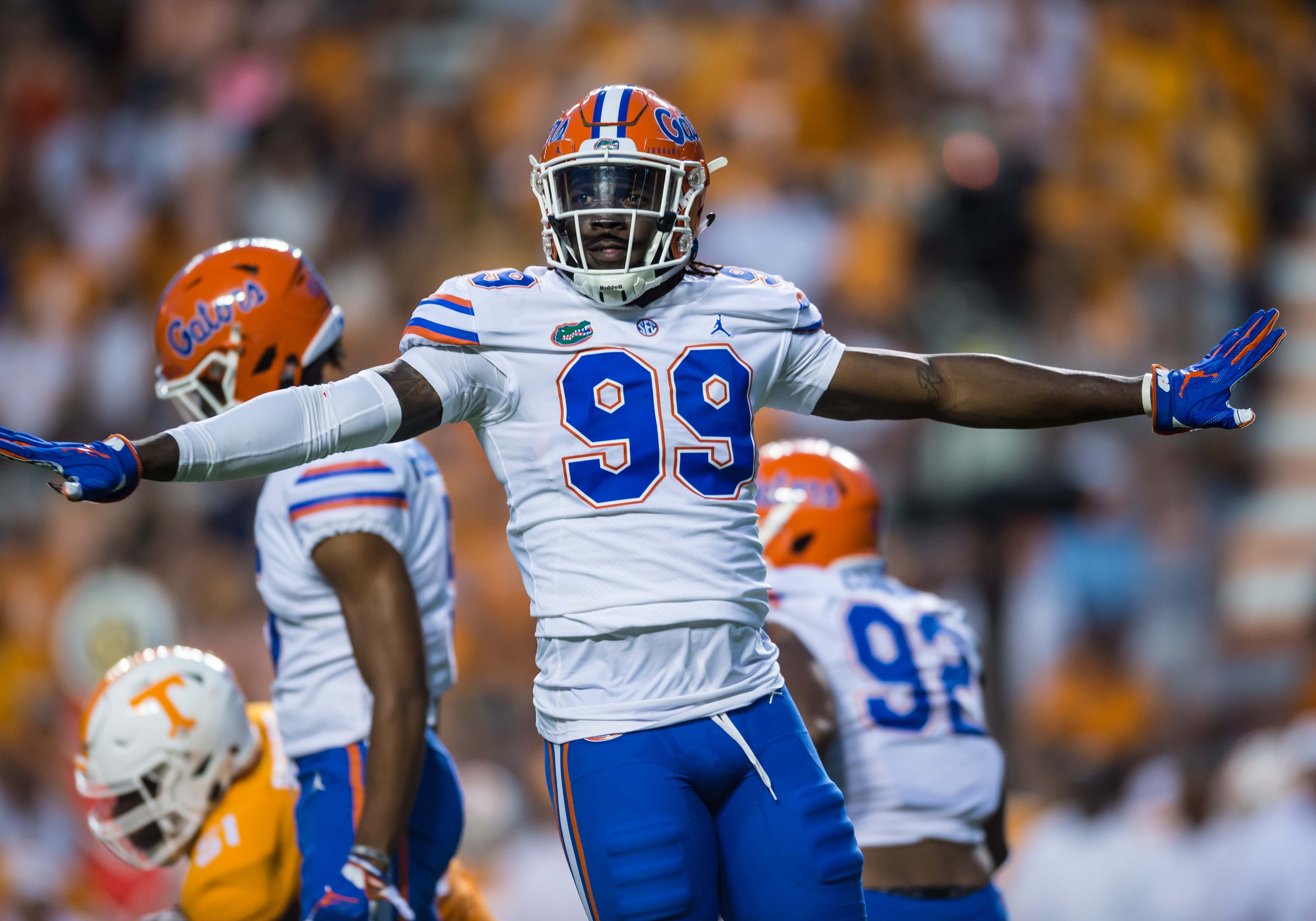 New York Jets rookie defensive end Jachai Polite was regarded early on in the NFL draft process as one of the top edge rushing prospects. However, after the NFL combine and interview process character questions and athleticism questions arose.

This ultimately caused Polite’s stock to drop. Earlier on it seemed as though he would be an early day two or a late day one pick but instead, he found himself falling into the laps of the old Jets front office regime.

Jachai always had the potential to be an amazing addition to whatever team he joined. He began his career at Florida with 11 tackles, 2.0 sacks and 3.5 TFLs. He only played 9 games and showed potential for greater results. Then in 2017, Jachai started off strong but ended up suffering a season-ending shoulder injury. He finished the season with 22 tackles,  5.5 TFLs and 2.0 sacks.

Last season, he showed the world what he could do. Jachai finished with 45 tackles, 19.5 TFLs, 11.0 sacks and 6 forced fumbles. That’s an impressive stat line that doesn’t even fully speak to what he did on the field. Jachai consistently made life hell for the opposition.

Now, Jachai joins the Jets looking to prove he was the steal of last year‘s draft. The Jets have lacked a genuine edge-rushing attack for what feels like forever.

How is the New York Jets defensive line looking?

Now with Henry Anderson, Leonard Williams and Quinnen Williams providing a dangerous interior rushing attack, it’s time for someone to step up off the edge. Who else but the guy who was overlooked and underestimated throughout his college career and NFL draft process to step up and become the edge rusher the Jets have lacked for so long.

Jachai is out to not only prove his doubters wrong but to show the world he can be a dominant edge rusher in this league. Expect some success from him early but in the future, this man will be a monster. So, maybe not this season but in the long haul, why can’t Jachai Polite be the answer to the Jets edge-rushing woes? 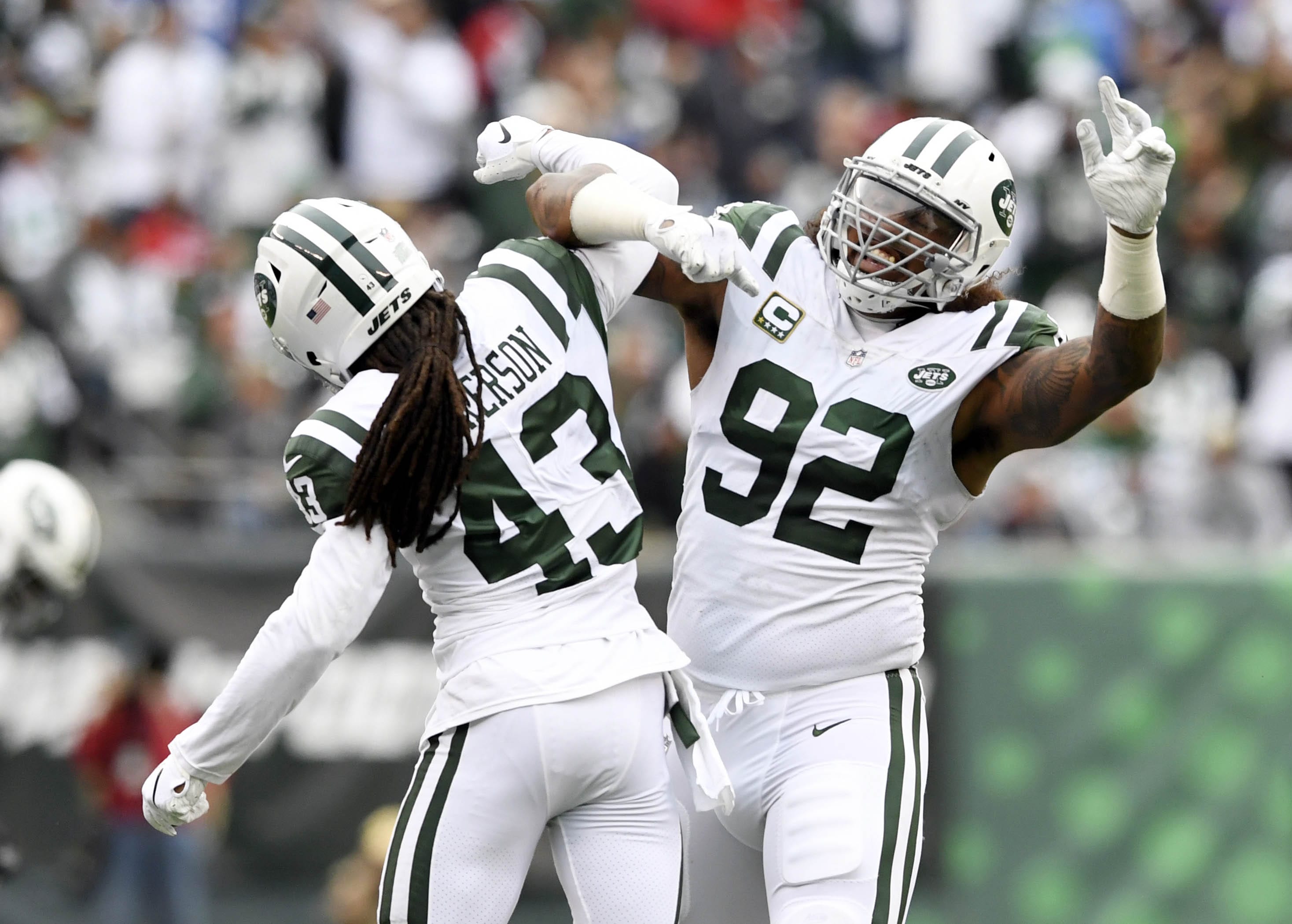 New York Jets defensive end Leonard Williams aka “Big Cat” has been a fan favorite and a reliable player since being drafted in 2015. He was regarded as the best player in the class before the draft. The expectations for the DE were high right off the bat.

Then in 2018, his production dipped with 47 tackles, 2.0 sacks, 3 TFLs, and 25 QB Hits. It became apparent that the double teams were hurting him and he needed back up. The Jets brought in Henry Anderson who had a phenomenal year but didn’t really help Williams much.

Leonard put up good pressure numbers but continued to lack his dominant presence shown earlier on when he had back up. This was evidenced in his 5.0 sacks, 42 tackles, 11 TFLs, and 20 QB hits. This seemed to be Williams ceiling with the Jets if backup never showed up.

Then the Jets took the monster from Alabama, Quinnen Williams. Just like that, the Jets formed a Williams 2x duo that will wreak havoc and kept Henry Anderson along as well.

It has become evident Anderson and Quinnen Williams will be big pieces on the defensive line for the future. Leonard Williams is in jeopardy, however. The Jets aren’t going to bring him back if he disappoints this upcoming season.

This is a contract year and without a doubt the biggest year of Williams’ career. A fork in the road one might call it. Two directions, two results, and one season to prove his worth once and for all.

Will he step up and show what he can do and earn himself an extension or will he disappoint and end up in a situation with his future up in the air? There is no doubt in my mind the disruptive pass rusher can be a productive player in this league, but his dominance has faded as double teams became more prominent.

Hopefully, adding a quality player like Quinnen will allow him to return to his former self. 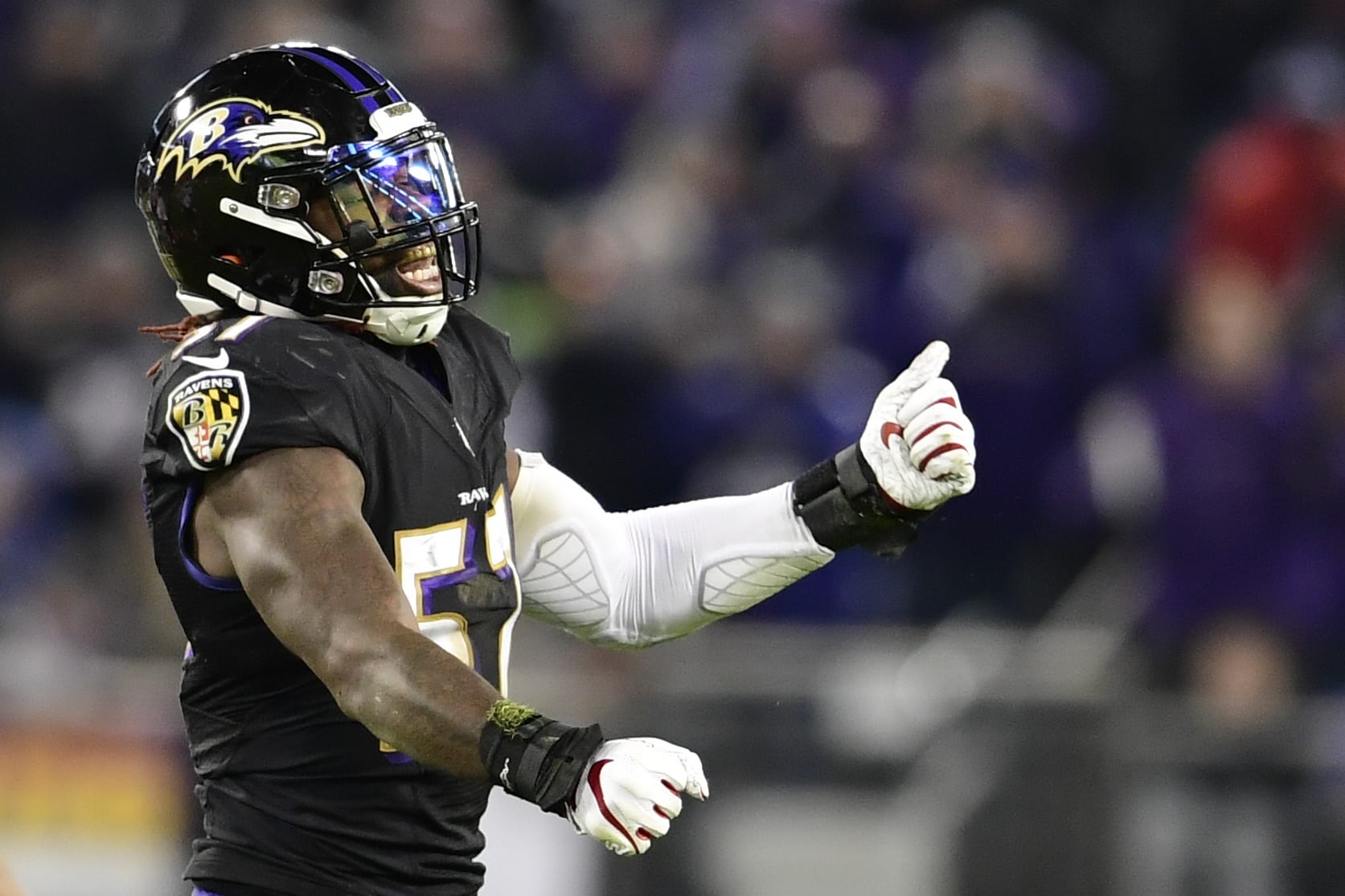 How will C.J. Mosely influence the New York Jets defense in 2019?

C.J. Mosley was always a guy I admired from afar. Then even this past offseason when the Ravens let him walk it seemed destined he would be back in a Raven uniform but ultimately he made the best long term decision and joined the Jets. Mosley has consistently been a top 5 linebacker in the NFL over the past few years.

Now, how will he fit in with Gang Green?

The 4-time pro bowler has been a dominant and reliable leader for the Baltimore Ravens defense since being drafted in 2014. Since then, Mosley has only missed 3 games and has had 4 out of 5 years with over 100+ tackles.

Mosley can be a threat in coverage as well but overall can be the kind of player to cover sideline to sideline and be a tackling machine. He’s ideally going to join Jamal Adams and work as the two captains of the Jets defense.

As for the linebacking core as a whole, some questioned the addition of Mosley initially having seen the success of Darron Lee and Avery Willamson, but when Lee was suspended for the remainder of the season for PEDs it became apparent that his lackluster performance in the past wouldn’t cut it anymore so the Jets added Mosley and traded Lee.

The Jets now have a phenomenal duo up the middle in Mosley and Willamson. They have some edge-rushing and outside linebacker depth in Jordan Jenkins, Brandon Copeland and Jachai Polite.

They have undrafted standout Frankie Luvu, veteran Neville Hewitt and rookie Blake Cashman. The Jets have good depth with high potential and with Mosley leading the charge, not only did the Jets upgrade with him as their new lead linebacker they also gained a leader who will be essential to the Jets success. 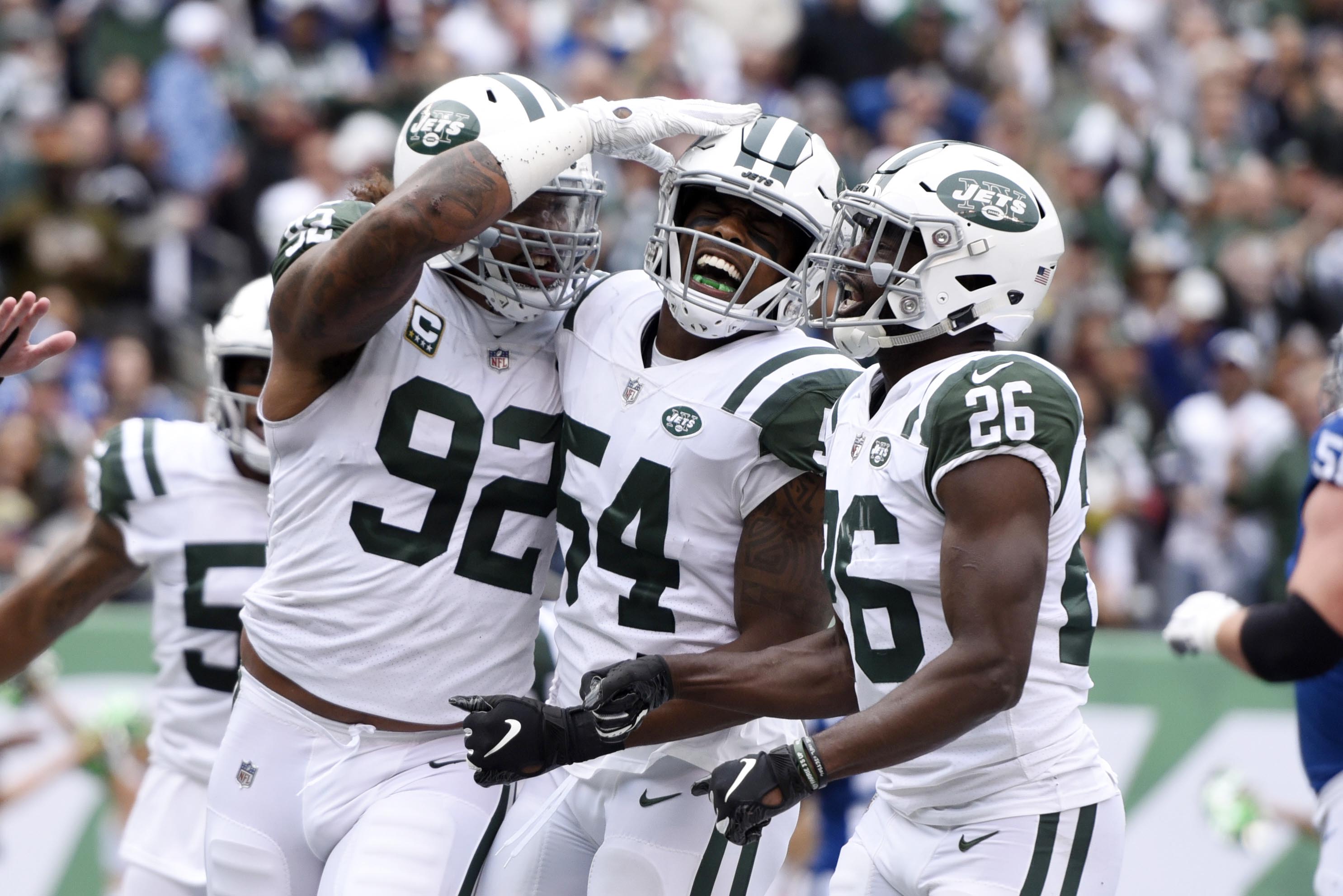 With under 50 days left until week 1 of the 2019 NFL season the New York Jets are considered one of the most improved rosters in the league. Many Jets fans expect the team to finally break its almost decade long playoff drought, and many others around the league expect the team to flop like it usually does. Here are some bold predictions for the New York Jets this upcoming season.

New York Jets will have a top 3 defense:

Gang Green made multiple splash moves this offseason to convert their defense into one of the top units in the league. The additions of Gregg Williams,  Quinnen Williams, and C.J. Mosely give the Jets an aggressive style of play which they lacked under former head coach Todd Bowles and defensive coordinator Kacy Rodgers.

Expect the rebuilt defense to blitz a lot this year under new defensive coordinator Gregg Williams who is one of the most aggressive play-callers in the league. A big key to the Jets having a top 3 defense is whether the front seven can work together to put pressure on the QB since the Jets lack a premier pass rusher.

Robby Anderson will have over 1000 receiving yards

Robby Anderson has slowly turned himself into one of the best deep threats in the league accumulating 1,693 yards and 15 touchdowns over the past two seasons according to Pro Football Reference. This is the year that Anderson takes his game to the next level and becomes the number one wide receiver the Jets haven’t had in years. Anderson’s ability to take the top off the defense will open up the playbook for head coach Adam Gase who has had success with players like Robby Anderson.

Williams duo will be the most important piece to the defense

This year’s first-round draft pick, Quinnen Williams, will make a tremendous impact on the Jets defense this year — 2015’s first-round pick Leonard Williams has been a good player but is constantly getting double-teamed due to the lack of talent around him on the front seven.

Quinnen Williams will help alleviate the number of double teams Leonard Williams receives, and in turn, will help boost Leonard’s production. Williams best season came when he was on a line that featured Muhammed Wilkerson and Sheldon Richardson. Expect these two to be one of the most disruptive duos in the league.

The New York Jets will finish 8-8

Unfortunately, not all bold predictions are positive, and this is one of them. The Jets on paper have a top ten roster in the league, but it’s hard to trust a franchise that always seems to be one of the most incompetent in the league. Adam Gase underwhelmed as head coach in Miami leading them to a 6-10 and 7-9 record his last two years.

Gase never was able to develop Ryan Tannehill into the franchise QB the Dolphins imagined he’d be. The Dolphins over the past 3 years have ranked amongst the worst when it comes to offense. Clearly, Gase has been a below-average head coach. For this prediction to be wrong Adam Gase needs to learn from his previous mistakes in Miami and correct them, or else he’ll be a colossal failure in New York. 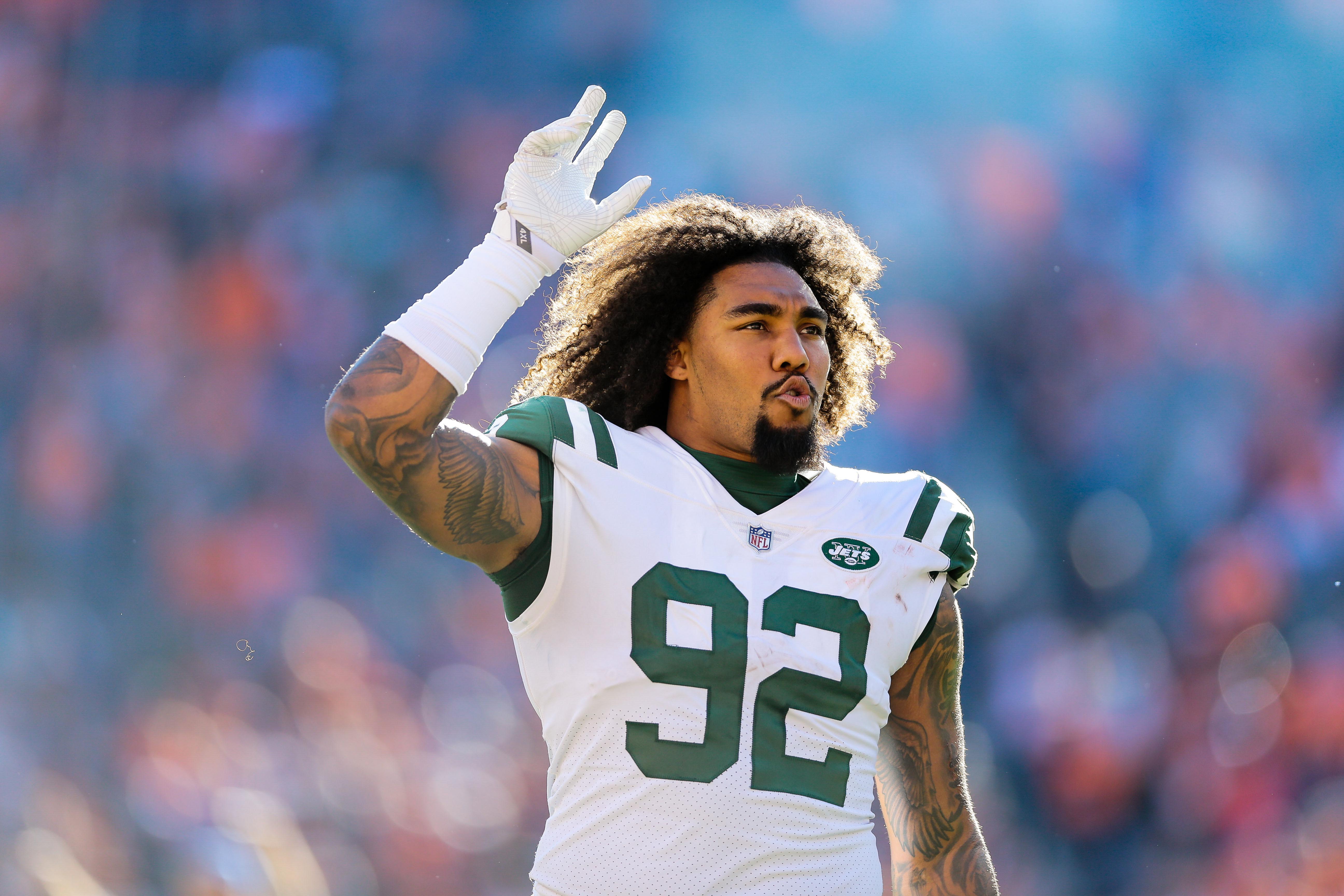 The New York Jets will be looking to take over the league with a young and rejuvenated defense, and defensive end Leonard Williams will play a massive role in this approach. After having a down 2017 in which Williams racked up just two sacks and 47 tackles, he will look to bounce back in the season ahead.

In 2016, Williams finished with 68 tackles and seven sacks, proving to be a fantastic addition with tons of potential. Well, the sophomore slump is a real thing, don’t you doubt it.

With a stout secondary and a developing but knowledgeable linebacker core, this could be the year for Williams to do what he does best – sacking the quarterback. With Trumaine Johnson locking up the No. 1 receiver and Morris Claiborne holding the opposing No. 2, we can only hope they can provide Williams with the time to beat his assignment and get after the quarterback.

Not to mention securing the run game with his buddy Steve McLendon right beside him who has shown promise with a career high 46 tackles and a career medium of 1.5 sacks. More will be expected from the two defensive lineman in 2018, as head coach Todd Bowles will look to utilize them in specified packages and every-down duties.

It’s Williams’ time to shine for the New York Jets:

After Sheldon Richardson took his talents to the Seattle Seahawks two years ago and Muhammad Wilkerson sped off to the Green Bay Packers this year, we are left with one defensive stronghold left, Leonard Williams.

Both Wilkerson and Richardson combined for a total of 51 sacks and 483 tackles in their four-year span together from 2013-2016. That averages out to about 12.5 sacks and 120 tackles per season. I predict that Williams will reach at least 10 sacks this season and will have at least 60 tackles. These predictions are not bold, because this is the last year on Williams’s rookie contract after it was exercised by the Jets.