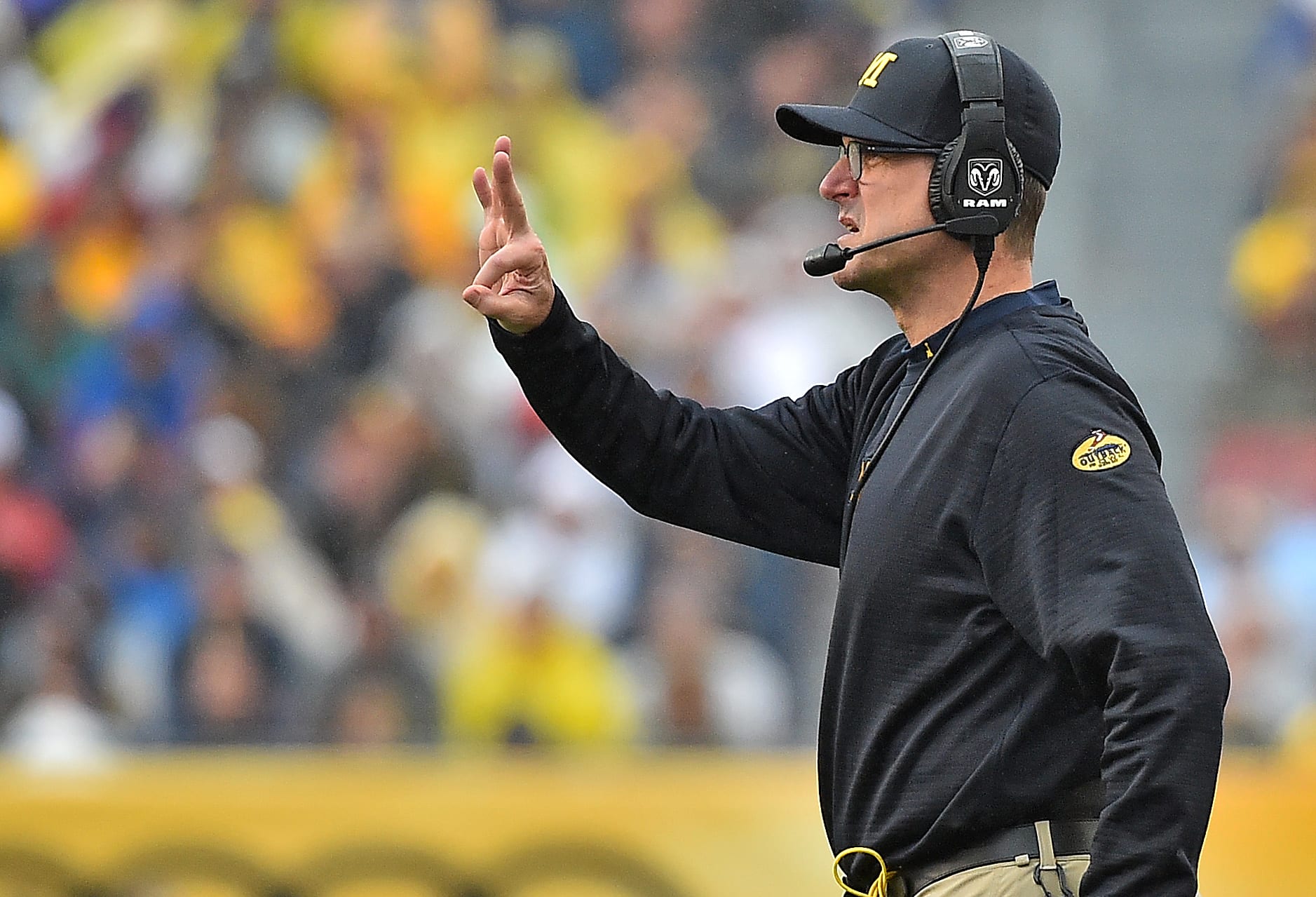 The New York Jets are the worst football team currently in the NFL. They have a chance to go winless this season. The Jets have not fired their current head coach Adam Gase. There have been a few names that have emerged in the conversation, but this has been a name that has emerged since 2009.

The New York Jets have been linked with Michigan coach Jim Harbaugh for the past three head coaching searches. But in 2020, it seems like the stars have aligned to get Harbaugh back into the NFL.

In 2009, the Jets secretly interviewed Harbaugh. Ultimately the Jets went with Rex Ryan, who was the coach at Stanford University.

Three years later, in 2014, after being released by the 49ers. The Jets ‘toyed’ with hiring Harbaugh again. Harbaugh decided in 2014 that he would go back and coach college football at Michigan. Were Harbaugh currently coaches at. The Jets ultimately hired Todd Bowels.

Four years later, in 2018, the Jets released Bowles and tried to lure Harbaugh once more. The team to this day denies all reports, but at the end of the day, Harbaugh decided to stay with Michigan.

Now we are here in 2020 wondering the same thing, will the Jets pursue Harbaugh once again?

Harbaugh’s time at the 49ers

In 2011, the 49ers made one of the best decisions that their franchise made in a decade. The hiring of Harbaugh changed their entire organization for a few years. The 49ers did not have a winning record from 2003-2010, and Harbaugh turned them into a Super Bowl contending team and his short four years there. In four seasons, Harbaugh went to the playoffs three out of the four seasons and also went to the Super Bowl against the Baltimore Ravens.

Harbaugh changed the entire team, but he changed the most important position on the field, his quarterbacks. Harbaugh brought the best out of Alex Smith. When Smith got hurt during their 2012 season, Colin Kaepernick was the backup. Harbaugh turned Kaepernick into a dynamic and starting quarterback for years to come.

In 2014, Harbaugh and the 49ers’ front office clashed so severely, the 49ers fired Harbaugh. Harbaugh decided to go coach college football again at Michigan, where he currently coaches at now.

Does it make sense for the Jets are hire Harbaugh?

Harbaugh built successful programs at Michigan and Stanford. Harbaugh turned the 49ers from a losing record team to the playoffs and Super Bowl in just a few short years.

At Stanford, Harbaugh developed one of the better quarterbacks in the NFL, he is currently retired, in Andrew Luck. Harbaugh also brought the best out of Smith when he was the starter for the 49ers. Harbaugh changed his entire playbook for Kaepernick but also made him successful and also win a Super Bowl with him.

Another con would be, Douglas does not have a clear connection with Harbaugh other than working with his brother, John Harbaugh, with the Ravens.

Harbaugh is a name to follow during the rest of the NFL season and the offseason. Harbaugh and the Jets have been a thought for the last 11 years, it would a shock if the Jets go after Harbaugh hard this offseason. 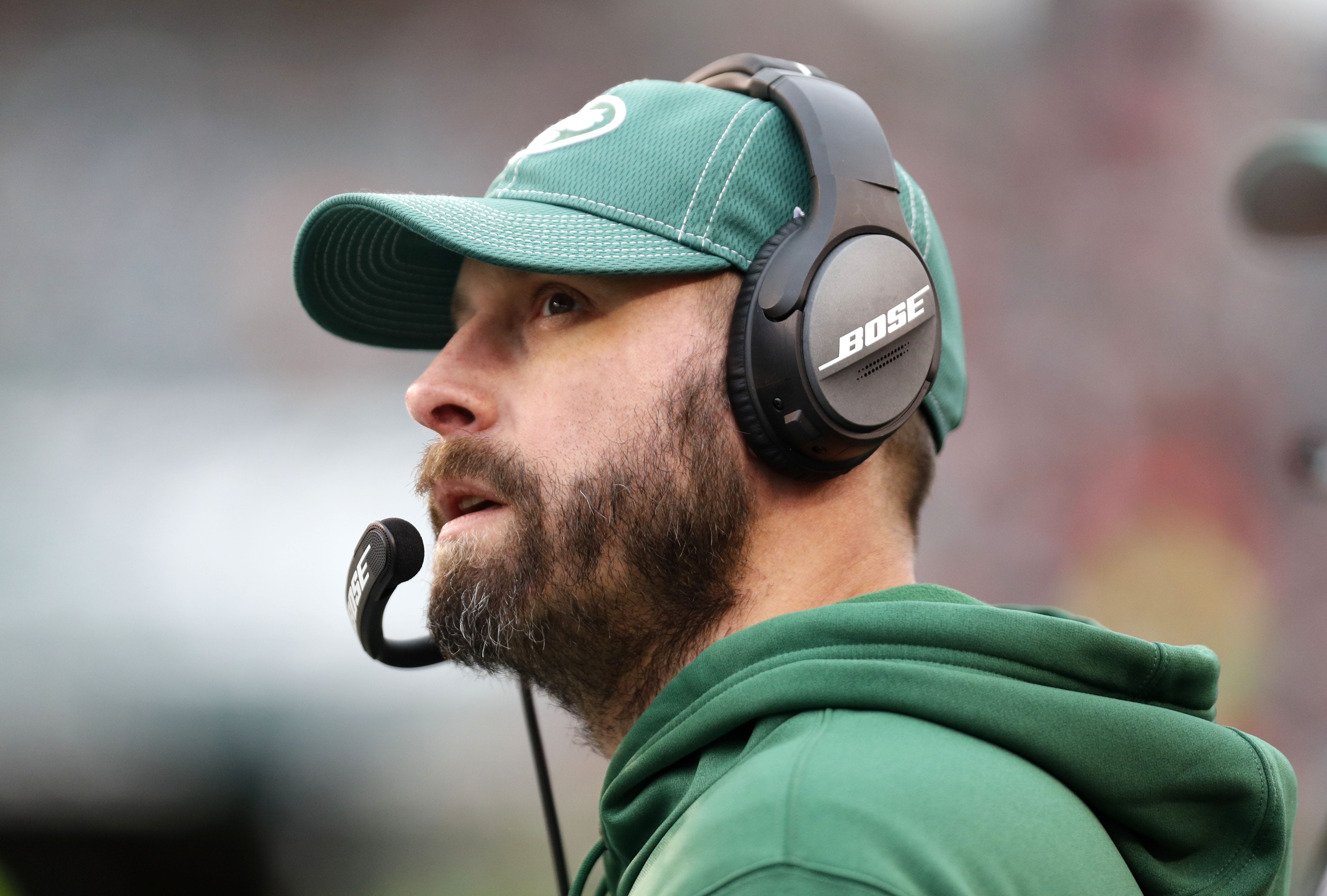 Currently, the New York Jets are a little over a year removed from tapping Adam Gase to be the next head coach of the franchise. The Jets’ choice came down to three guys. Now Panthers coach Matt Rhule, Cowboys head coach Mike McCarthy and Gase. Now, with his less than impressive reputation from Miami and a mediocre first season in New York, Gase is a hot seat candidate for next offseason. Obviously, the hope is that Gase is the long term leader of the team. However, if Gase can’t show growth in year two, these are a few early candidates to replace him.

Eric Bieniemy is a football lifer. Bieniemy was an All American running back for the Colorado Buffaloes. Bieniemy was a Heisman Trophy finalist and ultimately earned himself a spot as a pro running back. Then, after nearly a decade in the NFL, Bieniemy went into coaching. After being the offensive coordinator for his alma mater, Bieniemy has now worked his way up to Andy Reid’s right-hand man.

Following a Super Bowl win, Bieniemy continues to fly under the radar. Bieniemy is almost certain to earn more head coaching consideration this next cycle, and if the Jets are in the market for a coach, Bieniemy would be an obvious candidate. Bieniemy is a natural leader who has built excellent relationships with his players. Bieniemy is likely the safest option of next offseason with the level of mentorship he’s had and his extensive knowledge. Still, the Jets have tried the safe route before with their last two hires, and it’s time to go for a more innovative candidate.

The Jets should turn to the AFC East for their next head coach. Daboll came into Buffalo to mentor Josh Allen and has since been tied to his development. He’s been credited for designing the offense around Allen’s strengths and having an excellent control over the offense. Daboll is a quarterback whisper, but that sentiment can only carry him so far if Allen doesn’t take another big jump this season. If Allen and the Bills offense takes another step forward, Daboll could be a proven yet innovative mind that could make sense.

Joe Brady has been labeled as a key guy in the step Joe Burrow took last season from a mediocre season to one of the best statistical seasons in college football history. Brady also used Clyde Edwards Helaire fairly well and all the other weapons LSU had. Brady now earned a shot to prove himself at the pro level. Brady will now run the Panthers offense for this upcoming season. A good season could catapult him from a young coordinator to a franchise-changing head coach. Brady still has to prove himself before he earns legitimate hype as a head coach candidate.

Leftwich is a former quarterback turned coach. After showing impressive growth in his first season as the offensive coordinator for the Buccaneers, Leftwich deserves recognition. Leftwich led the top offense in franchise history, which says something. Leftwich is still unproven having a mediocre season in 2018 as the Cardinals offensive coordinator. Leftwich would be an outside the box hire that could reshape the offense for the long haul.

Harbaugh tends to set an internal limit on how long he can stay in one spot. Once the team gets back on track and competitive, he tends to head elsewhere. Prior to this season, he seemed content with Michigan, that was until the pandemic postponed the season. Harbaugh seems less than enthused with the way the Big Ten has handled the situation, so could that prompt a move? Harbaugh was floated as a candidate once before, and he could make a lot of sense this time around.

I firmly believe that if the Jets were to ax Gase, Williams makes the most sense as his successor. Yes, he’s been a head coach before, but that was nearly two decades ago. Williams had a 17-31 record coaching the Bills. Since then, he’s been a defensive coordinator for a bunch of different teams. He also has grown as a coach from experience, and that showed two seasons ago. After the Browns axed Hue Jackson midseason, Williams piloted the team to a 5-3 finish that set expectations incredibly high for last season. Then, when the Browns passed over Williams for Kitchens, he found a home in New York. With the lack of success Kitchens had last season, it’s fair to say that Williams was the reason that team had as much success as they did. Williams is a true leader and deserves a shot to try again at leading a franchise. 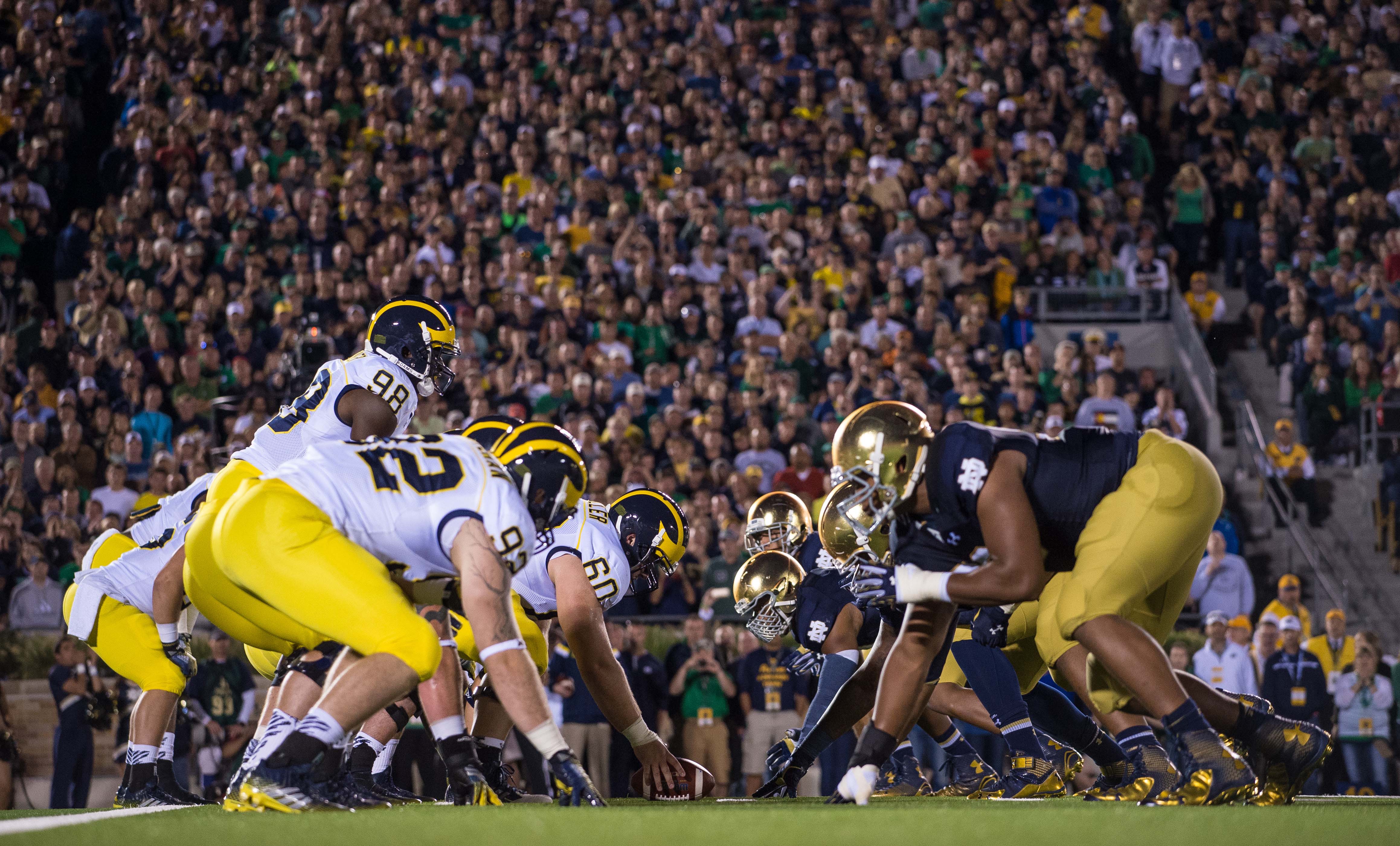 Michigan versus Michigan State is the biggest game of the week. Not just because it’s a rivalry and because it will decide bragging rights for the state of Michigan, but because of the implications this game has for the conference standings. The winner of the game will still be in the running to catch Ohio State, which is second in the division at the moment but higher in the national rankings. The loser, however, will have been dealt a crucial conference loss.

For Michigan, it would be their first of the year and would severely hurt their chances. For MSU, that second conference loss would kill their hopes. It’s a big game for a reason, but going into it, Michigan head coach Jim Harbaugh hasn’t given much away or provided any quotes that will be bulletin board material.

While the last press conference wasn’t exactly exciting, some interesting things were said.

“Again, better each week. He finds another thing to be really good at every single week. This past week, his running ability, his ball-handling was superb with the fakes, with the carrying out the fakes, with the decision-making, ball security,” Harbaugh said about his quarterback, Shea Patterson.

The Ole Miss transfer threw for only 124 yards and no touchdowns against Wisconsin, but had three touchdowns the game prior against Maryland. During the Wisconsin game, Patterson had no turnovers, and that’s another point that Harbaugh mentioned. “He does a great job of taking care of the football. He had one that he forced in this ball game last week, but that’s the first one I can remember in a while, in several games anyway. Does a great job making decisions. Team trusts him.”

Harbaugh also said a little bit about his team’s quietness coming into this important matchup. “I think we could all use a break from the clichés that have been plowed so thoroughly on both sides.”

However, fans will have to wait until the actual game to find out more specific details. Harbaugh stated that he wouldn’t talk about injuries or schemes, meaning we won’t know which of Michigan’s injured players could show up for this game. Rashan Gary is the most notable of those players, and the star defensive lineman is listed as questionable. 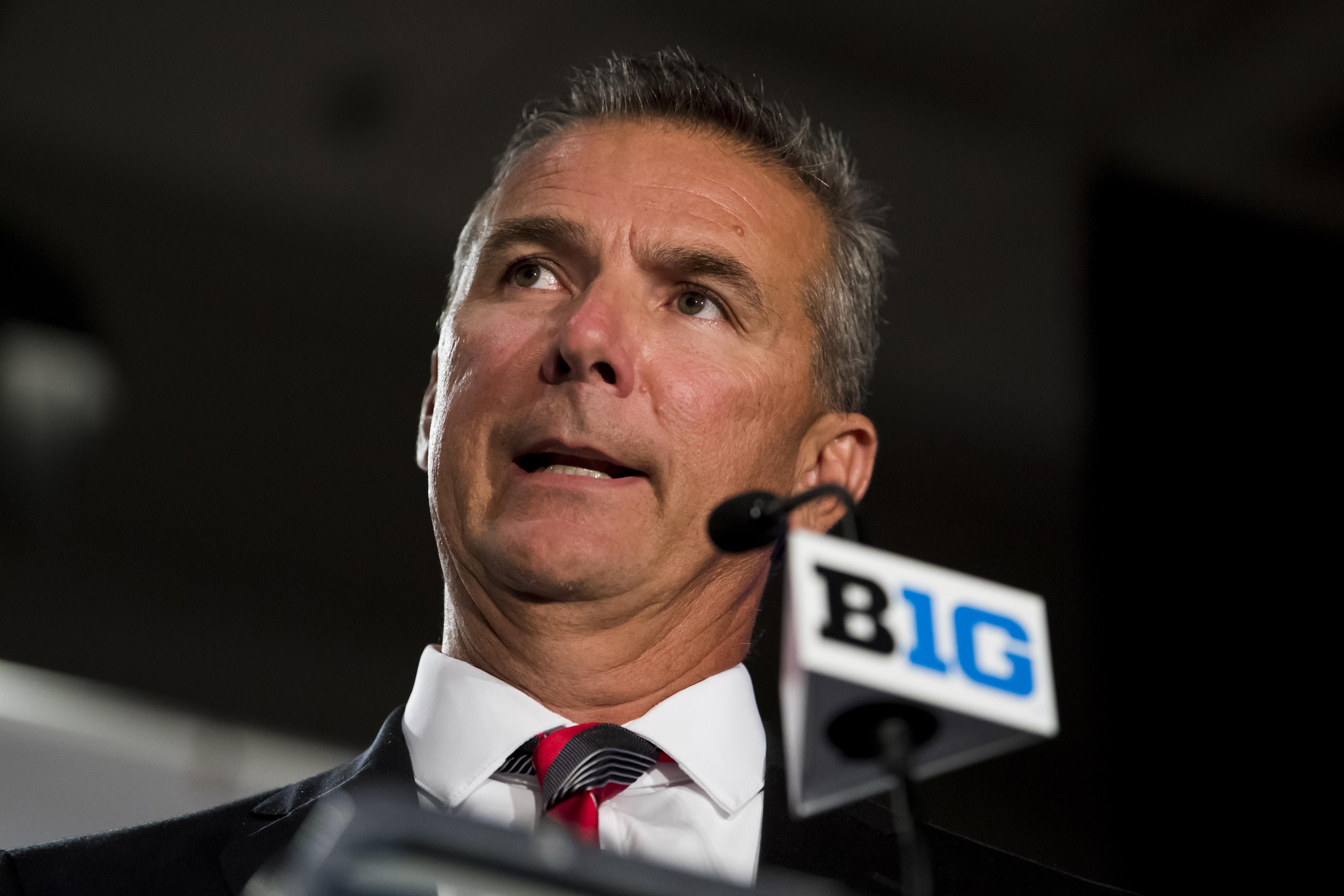