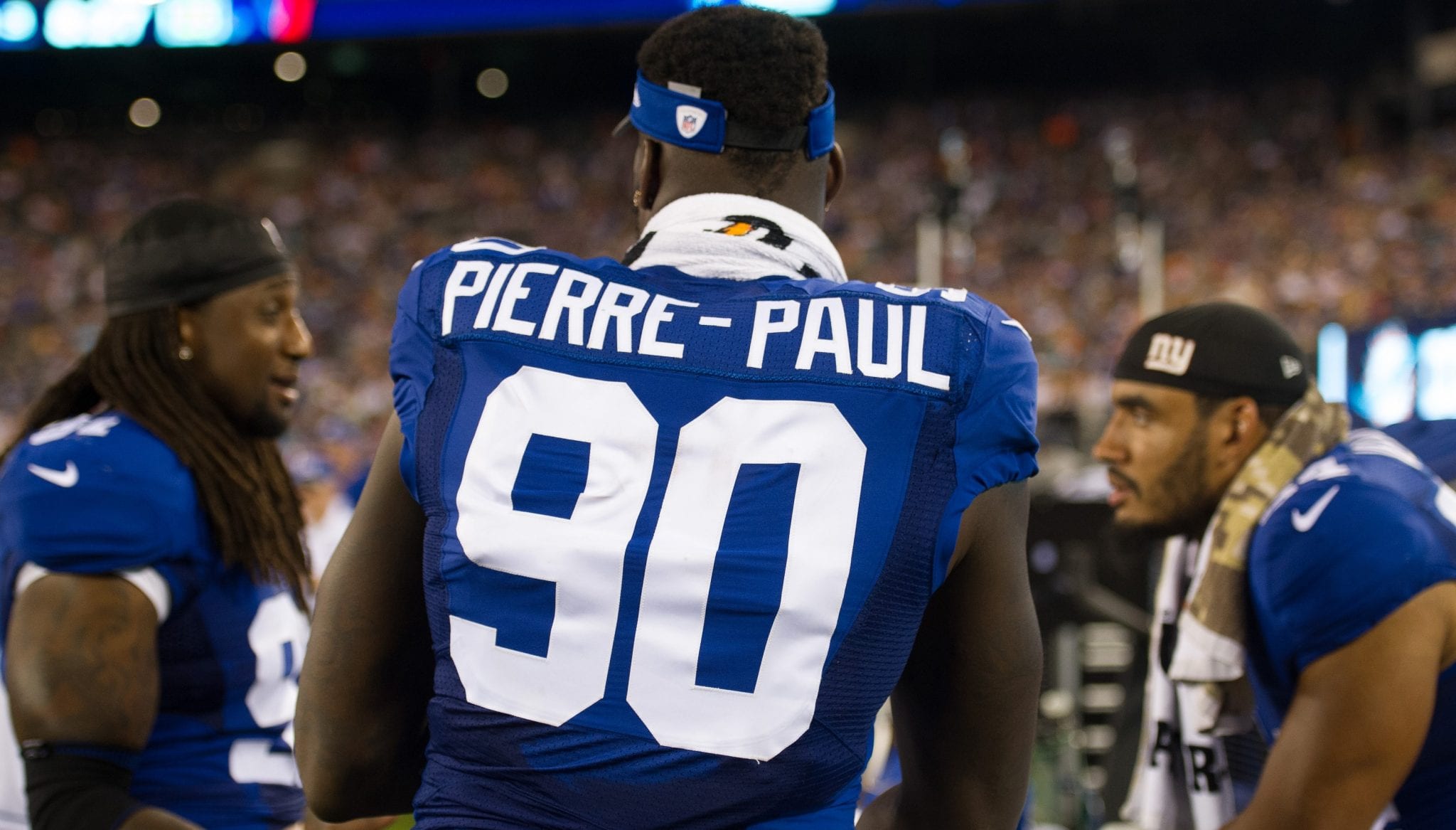 The Giants got lucky finding JPP

Despite the big accomplishments with USF, Selvie wasn’t the player that jumped out when Ross was actually watching film.

“I’m watching tape and this number 90 just keeps jumping off the tape. I had to keep checking the chart. I’m supposed to be watching George Selvie, he was 95, but this 90 guy… I kept looking up and thinking ‘Damn, I must be looking at the wrong guy.’ But it was JPP.”

Ross would tell Jerry Reese about Pierre-Paul after he continued to improve through the season. Reese eventually acted on that info, and the Giants selected JPP with the 15th pick in the draft. He’d end up playing with the team from 2010 through 2018, making a name for himself as an iconic Giants pass rusher in the process.

The Giants have had a few different top pass rushers since Pierre-Paul ended up in Tampa. Most recently, Markus Golden in 2019 and Leonard Williams in 2020 took up the mantle. As for the next player who will lead the team in sacks, that’s still an unknown as of now. That could very well be Williams again – but the Giants have to bring him back, first.

As the organization has found out since trading JPP, it’s not so easy to keep a top pass rusher around long term.

When you think of former New York Giants quarterback Eli Manning, you immediately flashback to his two Super Bowl victories. Needless to say, he has tallied over 57,000 yards, 366 touchdowns, and a career 60.3 completion percentage in his career. He missed one game in his entire career, and it was all because Ben McAdoo had to display a show of power and replace him with Geno Smith… as if he was going to make a difference.

Manning is a Hall of Fame quarterback, there’s no question about it, despite his 244 career interceptions and 411 sacks. Ultimately, his two Super Bowl rings are more than enough proof to land him with the greats. However, one former Giant doesn’t believe he’s enjoyed time with a truly dominant quarterback, raving about Tom Brady and his excellence.

“It’s totally different from all the years I’ve been playing football, and every guy on this team should have that feeling. Like I said, he’s the G.O.A.T. of football. There’s a reason he has six NFL championship rings. You can see it.” – JPP on Brady

I wonder if Pierre-Paul remembers the Super Bowl he won because of Eli Manning’s sideline throw in 2010. A game-saving throw to Mario Manningham on the left sideline was the difference-maker, but it seems his memory is cut short to the present.
With that being said, Tom Brady is head and shoulders above Manning in terms of success and overall statistics. With six Super Bowl rings to his name, Brady has nearly 75,000 passing yards with 541 touchdowns and a career 63.8 completion percentage. Pierre Paul will likely never play with a quarterback as talented as Brady in the NFL, at least mentally talented.
Brady’s pinpoint accuracy and ability to diagnose coverages are what make him so unique. However, disregarding Manning for Brady is interesting, nonetheless. In his prime, Manning was one of the best quarterbacks in the NFL, but a lackluster offensive line and injuries to his playmakers took their toll on the durable passer.

Former New York Giants defensive end Jason Pierre-Paul was a force to be reckoned with taking down opposing teams with vigor and agility and even though he may be with the Tampa Bay Buccaneers, his dynamism and endurance have not changed one bit!  For his intensity and skills, he received a spot on the NFL’s Top 100 Players of 2018.

What really speaks about Pierre-Paul is his love and appreciation for life! Pierre-Paul is a very friendly person and is so down-to-earth with everybody he meets.  As soon as he enters a place he commands it with his effervescence and good spirit!  His smile can light up the whole room.

No matter what adversity he faces, Pierre-Paul handles everything life throws at him with grace and respect.  He takes any negativity and spins it in a positive way.  Pierre-Paul is an inspiration to all and an embodiment of how we can all choose to see the good in life.  Through his Instagram posts, Pierre-Paul tries and uplifts others by letting us all know that we all have the power to live our best lives possible.

Pierre-Paul is a dedicated husband to his incredibly supportive wife, Louise and an amazing father to his precious kids, Josiah and Joline and values his family over everything.  He and his wife have a bond that is unbreakable, as they are truly best friends.  It is so heartwarming to see how they make each other so happy and have such a beautiful dynamic!  He considers all of them his gifts and a true blessing and it shows.

With each and every opportunity Pierre-Paul embarks on, he does it with such heart and determination and always gives it his all.  He is a role model in every sense of the word and strives at being the best husband, father, teammate, and person he could be!

Pierre-Paul serves as a true testament to the fact that when we remove ourselves from all of the negativity, we can truly shine!  He always stands tall and handles everything with pure positivity!  He has a beautiful outlook on life and cherishes every day his eyes open and makes you feel that way too!  His gratefulness and appreciation for life are one we all should adopt!  Pierre-Paul is truly special, not just for what he does on the field, but off of it as well! 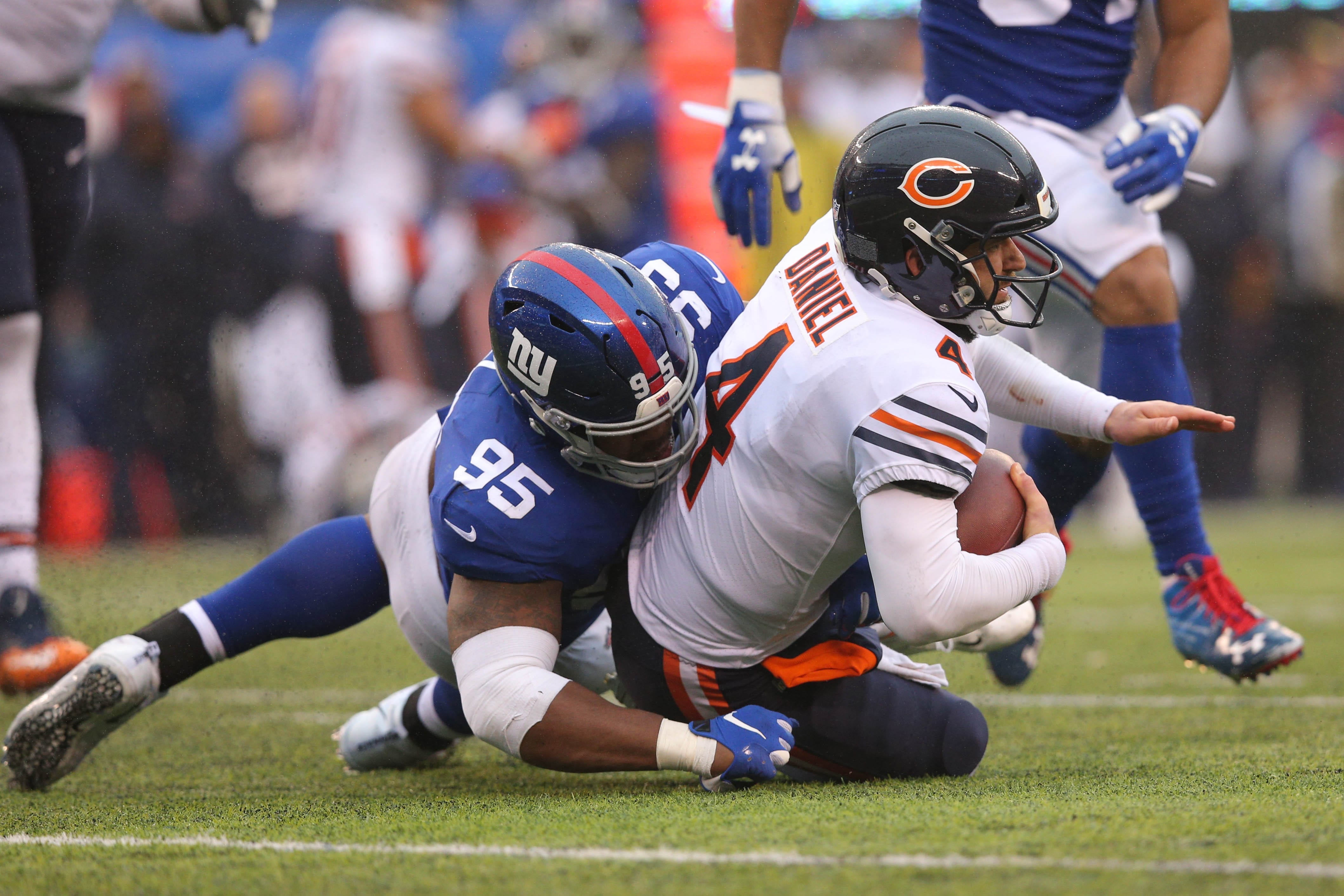 The New York Giants had one of the worst defenses in the league in 2017. That did not change in 2018, as the Giants’ defense in 2018 ranked 23rd in yards allowed per game and 24 in points allowed per game.

Despite the overall poor play by the defense, the Giants did have a couple standout players on the team. Third round rookie B.J. Hill was an impact player in 2018 and has shown promise as a building block for the future.

In the 2018 NFL Draft, the Giants selected B.J. Hill out of North Carolina State in the third round. The Giants used the pick they received from the Buccaneers in a trade for Jason Pierre-Paul. Giants fans should be thankful that Gettleman was able to receive a third round pick for JPP. Pierre-Paul is an aging veteran whose production had been falling each season. B.J. Hill is a promising young rookie with high potential.

Hill racked up the tackles this season. From his interior defensive line position, Hill was able to produce 48 combined tackles on the season. He also added 6 tackles for loss.

B.J. Hill plays as an interior defensive lineman, but he is not merely a run stuffer. Hill proved that he is an excellent interior penetrator. B.J. Hill set a New York Giants franchise record in 2018. His 5.5 sacks were the most ever by a rookie in Giants history since the sack became an official statistic in 1982. The 5.5 sacks were also the fourth most by a rookie this season. This statistic proves B.J. Hill will be a force on the Giants’ defense for years to come.

B.J. Hill’s most impressive game came in week 13 against the Chicago Bears. This was Hill’s coming out party. Fans were not completely aware of Hill until this game, as he broke out with a 3 sack performance in the Giants’ overtime victory. He also added multiple pressures and two tackles for loss. Hill was especially disruptive against Chicago and helped the Giants come away with a big win.

The New York Giants were lucky to find B.J. Hill in the third round of the 2018 Draft. The Giants will need to build around Hill and continue to add pieces around him to improve the defense in 2019.