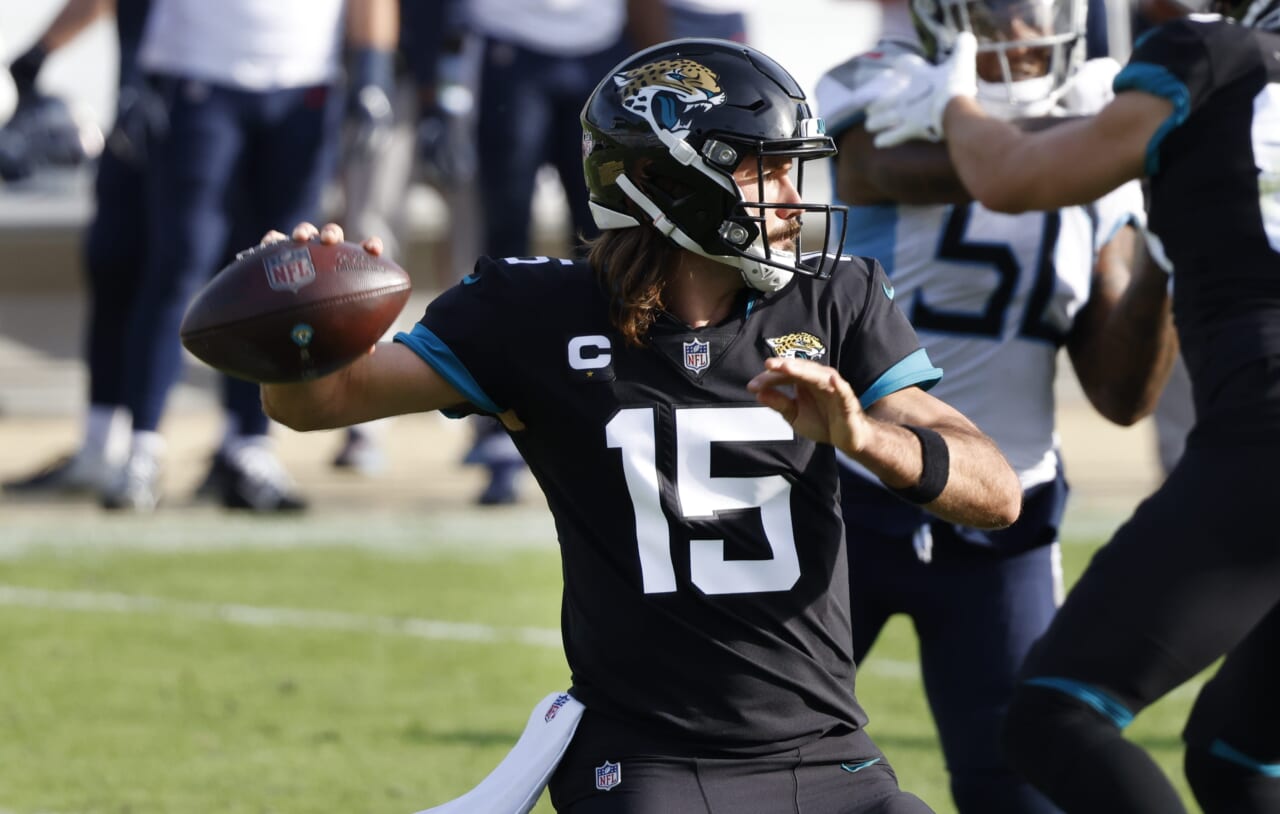 The New York Jets have already added one former Jacksonville Jaguar. Could another help them solidify a youthful revolt on offense?

Salvation for the two-win New York Jets could be earned through the one team that managed to finish worse: the 1-15 Jacksonville Jaguars.

The Jets have already added one North Floridian import in receiver Keelan Cole, a slot receiver that managed to earn a Duval-best 2,242 yards over the last four seasons despite relentless turnover at the quarterback position. Cole entered the league as an undrafted free agent in 2017 and has had seven different starters throw to him, including three alone last season.

Jacksonville has a prime opportunity to finally stop the carousel as the owners of the top pick of April’s NFL Draft. The consensus top choice is Clemson star Trevor Lawrence. The Jets are immediately behind them and are doing their due diligence on rookie throwers like Justin Fields and Zach Wilson, as Sam Darnold’s future remains a metropolitan talking point.

But could the Jets’ solution lie in further negotiations with the Jaguars?

The incumbent thrower in Jacksonville is Gardner Minshew, a sixth-round pick out of Washington State in the 2019 draft. Jacksonville has reportedly embarked on an endeavor to trade Minshew before Lawrence presumably dons teal and black on April 29. Minshew has produced some impressive numbers despite working in relative gridiron squalor in Jacksonville, posting 5,530 yards, 37 touchdowns, and only 11 interceptions over the last two seasons.

ESM has four reasons why the Jets should investigate…

As the Jets continue to ponder the Darnold situation, many have risen in defense of the third overall pick from 2018, claiming his subpar numbers (79.1 passer rating, 28 touchdowns, 24 interceptions) over the last two seasons are the result of a toxic football environment brought upon by the Adam Gase era. However, Minshew has arguably had even worse surroundings in the wasteland of Jacksonville’s post-AFC title game visit in 2017.

With 23 games (21 starts) under his belt, Minshew nonetheless has best Darnold in touchdown passes, yardage, and passer rating despite partaking in two fewer games than the Jetsâ€™ incumbent. There’s time for Darnold to get his NFL act together, but if Minshew, who has proven he can produce in a professional setting, can help the Jets in the short-term and finally get some offensive momentum moving in the right direction, it’d help this hopeful chapter of the Jets’ perpetual rebuild get started on the right note.

He has a connection with a crucial newcomer

After a relatively slow start, the Jets have made a strong effort to upgrade their receiving weaponry. Reliable slot man Jamison Crowder appears to be on his way back with hopeful second round choice Denzel Mims. The newcomers have arrived from the AFC South. Corey Davis, fresh off a career-best season in Tennessee, joins the fold with Cole, the Jaguars’ most prolific receiver over the last four seasons.

Minshew bestowed some strong praise unto Colege heading into the 2020 season, comments that indicate that he would have no qualms working with him again.

“I love throwing to Cole and Iâ€™m excited to see what heâ€™s going to be doing,” Minshew said per Demetrius Harvey of Big Cat Country. â€œHeâ€™s got really good hands, can play all three positions, he makes the tough catch, heâ€™s been very consistent, heâ€™s become better at this route running, heâ€™s been able to get in and out a little better, so you see an improvement from last year to this year.â€

The Jets backed themselves into a bit of a cornerÂ

The Jets have undoubtedly upgraded this offseason, at least on paper. But their primary concern remains unsolved, one even bigger than the quarterback conundrum.

New York can resolve their quarterback situation one way or another. They can stick with Darnold, trade for a name like Minshew or Russell Wilson (the Deshaun Watson pursuit is likely on hold for obvious reasons), or wait until the draft. But no matter who the quarterback is, he’s going to need protection through a retooled offensive line. With the exception of adding the Los Angeles Chargers’ Dan Feeney…high in personality, low in analytical gradings…the Jets haven’t done anything to upgrade their much-maligned unit. Drafting Mekhi Becton was a good start last season, but general manager Joe Douglas’ free agency renovations haven’t panned out. Recurring target Joe Thuney is off to protect Patrick Mahomes in New England while Green Bay stud Corey Linsley is off to Feeney’s old stomping grounds.

Thus, the Jets find themselves in a bit of a conundrum. If they draft a quarterback, the poor first-year man will likely be running for his life or potentially see his confidence shattered behind a makeshift blocking unit. Thus, using the second choice on top blocking prospect Penei Sewell out of Oregon. Minshew would be a strong, if not temporary, solution while the Jets try to bolster the men in front of him.

Furthermore, taking on Minshew’s contract is a light load the Jets could handle while seeking out further options on the line. Over the next couple of seasons, Minshew’s combined cap hit is in the $2 million range.

He brings stability to a franchise in desperate need of it

Time will tell how Minshew’s NFL career plays out. As of now, he appears set to inherit Ryan Fitzpatrck’s throne in terms of being a serviceable fill-in option while accompanying such endeavors with a larger-than-life personality. At this point, he’s probably not a future franchise quarterback. But he can provide a sense of stability to a Jets team in desperate need of it, a security blanket, if only for a sense or two that the Jets desperately need.

The Jets are working on a playoff drought that’s nearly old enough to see a PG-13-rated movie without parental supervision. Ending that drought is a lot to ask for this year with still so many established contenders, no matter how much hope Robert Saleh brings to this team. But the Jets need to re-establish a sense of stability to their franchise at any cost possible. Thus, using Minshew as a stopgap option of sorts can help make the Jets a destination of sorts.

A comparable case came during the 2017 campaign in the form of Josh McCown. While far older and probably never reaching the statistical heights that Minshew has already traversed, McCown’s strong season on a Jets team some predicted would go winless helped them bring some stability to a team whose quarterback situation was in flux. The team had one less thing to worry about and was able to bide their time in finding a successor while being competitive in the meantime. McCown went 5-8 as a starter…featuring a win over the aforementioned AFC finalists from Jacksonville…but six of those eight defeats came by a single possession. Minshew can help the Jets build something further, helping get a new regime off in the right direction.