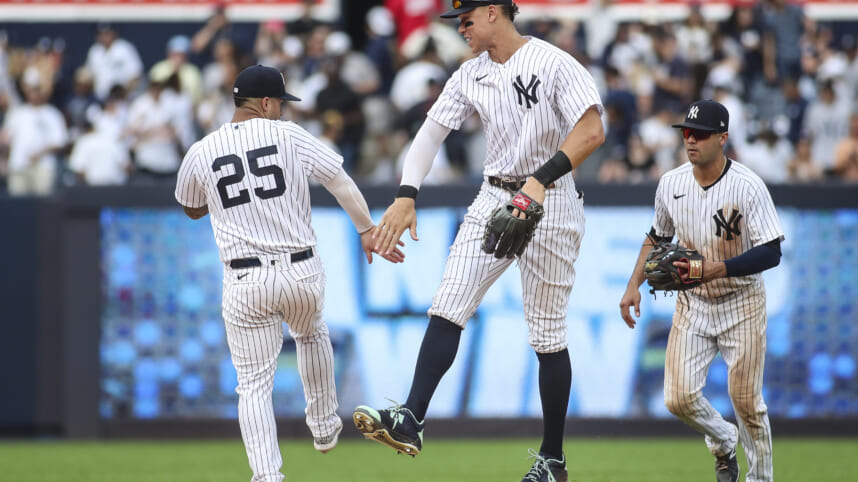 The New York Yankees will start their playoff journey on Tuesday night against the Cleveland Guardians, looking to put their best foot forward after enjoying a week off following the end of the 2022 regular season.

The Yankees just barely missed 100 wins but enjoyed one of the best performances of an individual player in the game via Aaron Judge.

However, metrics during the regular season can give us a bit of insight into head-to-head projections. With that in mind, let’s take a look at how the Yankees matched up against the Cleveland Guardians this season and the pitching matchup for Tuesday night’s Game 1 of the ALDS.

The Yankees faced off against the Guardians six times during the 2022 season, winning five of those games. In two of those contests, they scored double-digit runs, notably 10 on April 24 and 13 on July 2.

However, they dropped the final game of the season against Cleveland, failing to score a run. The Yanks were extremely effective in making contact, recording six hits and three earned runs over 6.1 innings against Cleveland starter Cal Quantrill, who is slated to feature in Game 1 on Tuesday night.

Quantrill hosts a 3.38 ERA this season with 6.18 strikeouts per nine, a 76.4% left on-base rate, and a 42.1% ground ball rate over 186.1 innings. He generates plenty of weak contact and has given up only one home run per nine innings, which suggests the Yankees may have to settle for contact hitting.

The 27-year-old starter utilizes a sinker, cutter, slider, and change-up sequence as his primary pitches. He throws a sinker at 45.1% and a cutter at 36.1%. Quantrill finished the 2022 regular season on a high note, logging a 3.06 ERA in September and allowing just one run over 5.0 innings in his season finale against Kansas City Royals on October 4.

Looking at his specific pitch metrics, Quantrill generates a .291 batting average against with a sinker, including a .425 slugging rate, 13.7% whiff rate, and 12.9% put-away rate. He also mixes in a cutter at 36.1% which generates a .235 batting average. Both his sinker and cutter represent his primary strikeout pitches but also gets a bit of action from his change-up, which he throws at 11.8% and produced 24 strikeouts this season.

Given his ability to limit home runs, the Yankees may have to attack Quantrill in a different way, utilizing their contact abilities.

On the other side of the mound, the Bombers will start Gerrit Cole in Game 1. Cole has given up a home run in eight consecutive contests, posting a 3.50 ERA this season with 11.53 strikeouts per nine, a 78.2% left-on-base rate, and a 42.4% ground ball rate over 200.2 innings. It took a few days for manager Aaron Boone to decide whether Cole or Nestor Cortés would get the start in Game 1, but he decided to roll with the more experienced option who can also feature in game 5 if necessary.

Cole finished the regular season on a shaky tear, recording a 4.80 ERA in September, giving up 16 earned runs over just 30 innings. The final start of the season against the Texas Rangers produced better results, giving up two earned runs over 6.0 innings, matching his season average.

The pitching matchup looks like a wash given Quantrill limits home runs significantly and had a decent performance against the Yankees earlier in the season.

however, Cole does have leverage in one area, since Cleveland is one of the worst home run-hitting teams in baseball and heavily relies on their contact capabilities.

Most opposing teams’ run production comes via home runs when facing Gerrit, rather than slapping him around in the field of play. That suggests that if Cole can limit the number of home runs he gives up, he should have tremendous success against Cleveland. Over two appearances this year, he hosts a 1.42 ERA with 15 strikeouts, meaning he could have the edge based on those variables.

Offensively, the Yankees have one of the more potent units in baseball, ranking 2nd in runs with 807. Cleveland sits at 15th with 698. If the pitching matchup ends up being even, the Yankees do have a significant advantage in the offensive category, but they’ve proven to be a bit polarizing this season.

In addition, it is also fair to mention that a few days off can interrupt the flow, but Cleveland only scored three total runs over a two-game series against the Tampa Bay Rays in the Wild Card. If their offense continues to produce dismal results, the Bombers should be able to squeak past one of the younger and more spry teams in baseball.