Yankees Trade Rumors: Joey Gallo could be the next piece moved at the deadline 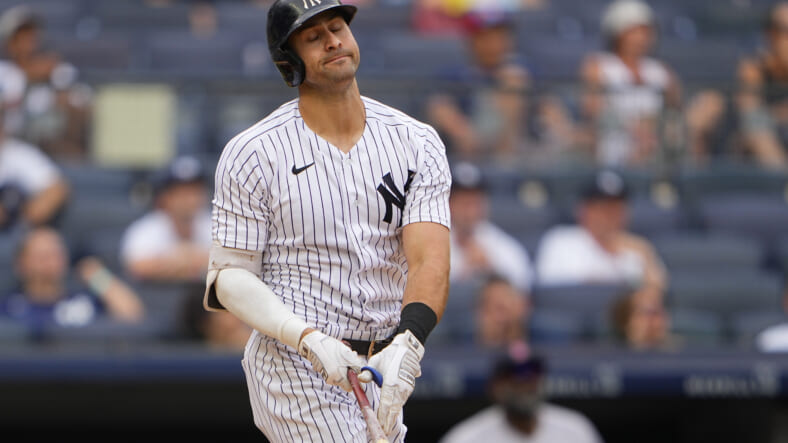 The New York Yankees have been trying to trade Joey Gallo for a few weeks, given his awful hitting metrics and inability to impact the team positively. They’ve been rolling him out, hoping that his slugging capabilities can catch on, but at the very least, he can play decent defense in the outfield.

Gallo is having the worst season of his career, hitting .161 with a 28.5% on-base rate. He’s posted 12 homers with 24 RBIs, featuring a 38.1% strikeout rate and 14.8% walk rate. The Yankees have ignored the strikeout metric for most players, but Gallo is simply incapable of making contact with the baseball. He features a 36.3% WHIFF rate against fastballs, 47.2% against breaking balls, and 43.9% against offspeed pitches.

In other words, his lack of contact has severely limited his success. In fact, Joey is so demoralized he’s simply waiting for the Yankees to trade him within the next few days.

“He’s waiting for something to happen,” a person with knowledge of Gallo’s mindset told NJ Advance Media.

Oddly, Gallo’s hard-hit metrics indicate he should be performing much better, but at this point, it’s simply a mental game. The pressure and intensity of playing for the Yankees are too much for Gallo, who hopes to land with a small market team like the Padres.

The Yankees know Gallo is suffering, so they are trying to end it via trade:

“It’s been a struggle and I feel like it has weighed on him and he has carried that around,” manager Aaron Boone said Wednesday.

“It’s been tough on Joey,” Boone said. “It’s been a tough road for him since coming over here where he just hasn’t found that traction. There’s no question in my mind that there’s still great baseball ahead for him, whether that’s immediately or in years to come.”

Boone went as far as to bench Gallo against the Mets on Wednesday, calling it unfair to walk him out there against Max Scherzer. That is a clear indication he has absolutely no faith that Joey can hit against one of the better pitchers in baseball. Boone is spot on, considering Gallo struggles against some of the worst pitchers in baseball.

The question is, what can the Yankees possibly get back in exchange for Gallo, who could perform better in a less aggressive environment? He’s currently on a one-year, $10.3 million deal, so a team would have to take on his contract, which would amount to about $5 million for the rest of the 2022 season.

Maybe the Yankees get a struggling relief pitcher in exchange or a prospect, but his value alone is questionable.