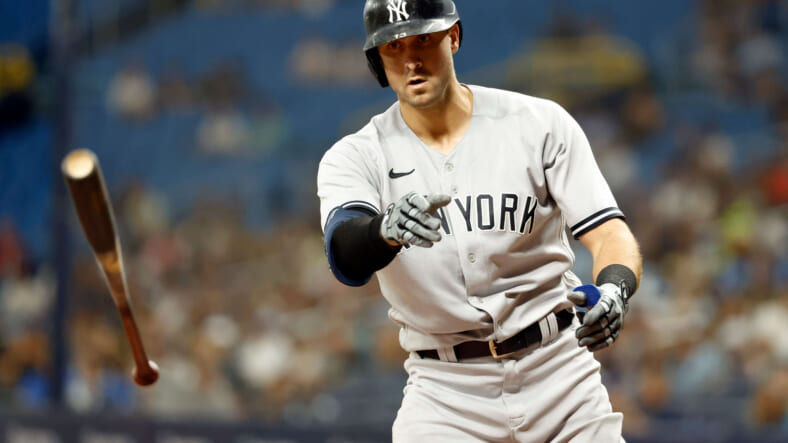 The New York Yankees have been looking to trade struggling outfielder Joey Gallo for a few weeks but haven’t found a deal worthwhile just yet ahead of the deadline.

General manager Brian Cashman has a few days left to gain assets in return for Gallo, who is currently on a one-year, $10.3 million contract. He’s set to become a free agent in 2023, coming off arguably the worst season of his career. He may prefer to sign a one-year contract and bounce back with a small-market team.

The Yankees are speaking with multiple teams about Gallo:

After giving away three single-A prospects for Andrew Benintendi, the Yankees may be looking to gain a few back in exchange for Gallo. Three teams have bubbled to the surface as potential options, including the Milwaukee Brewers, Minnesota Twins, and Tampa Bay Rays.

Yankees and Brewers have indeed talked a bit about Joey Gallo, who may fit Milwaukee much better than NYC. The Crew was in on Benintendi and could use OF help. @BNightengale mentioned Twins and Rays in addition to Brewers.

The Brewers were reportedly involved in Benintendi negotiations but ultimately lost out to the Yankees, who offered a slightly better package.

Gallo has been getting a bit unlucky, considering his hard-hit metrics. He has a 48% hard-hit rate, 17.3% barrel rate, and 88.4 mph of exit velocity. He should be hitting far more homers, or at the very least making better contact, but he has awful WHIFF rates with nearly every pitch.

Gallo features a 37% WHIFF rate on fastballs, 47.3% on breaking balls, and 43.9% on off-speed pitches. The outfielder spoke with Lindsey Adler of The Athletic recently, indicating his disappointment thus far wearing pinstripes.

“This is a tough place to not play well,” Gallo said of New York, per Lindsey Adler of The Athletic. “It’s hard to deal with, and at the end of the day, you want to make fans happy and proud. So when you are understandably getting not-good feedback from them on a constant basis, it’s tough. It doesn’t make you feel good about yourself. But that’s something I needed to learn, and I see it as part of growing for me as a person and as a player.”

Gallo has to be traded to a team where he can make an impact, likely in a smaller market where he can dodge the negativity and hostile interactions with fans.

The question is, what can the Yankees get back for Gallo, given the plummeting of his value this season? A team looking for a good defender in the outfield with lefty power may place a solid number on him, but Cashman isn’t going to trade him for pennies on the dollar.