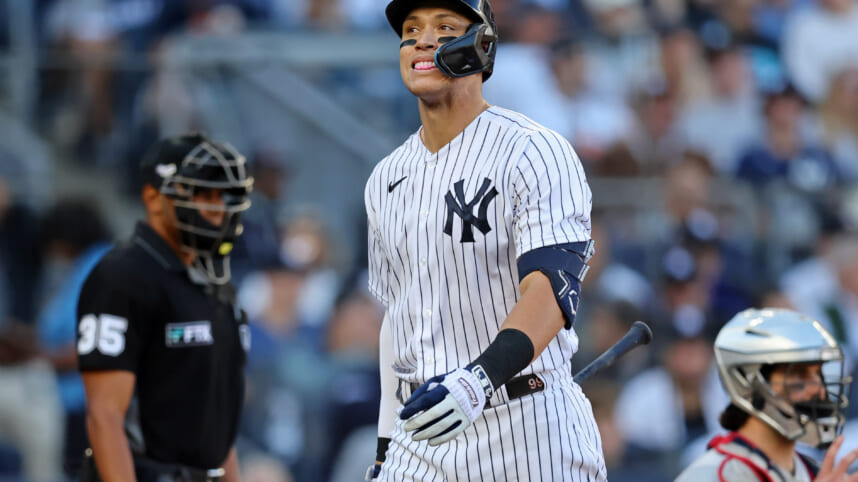 Only New York Yankees fans could find a way to boo a player that just had one of the best MLB seasons in the history of the game. Superstar slugger Aaron Judge has had a tough first two outings against the Cleveland Guardians in the ALDS, but that hasn’t stopped fans from letting him hear their displeasure, especially after a four-strikeout performance against Cleveland on Friday afternoon.

Judge is coming off a campaign that will go down in the history books, hitting .311 with a 42.5% on-base rate, including a record-breaking 62 homers and a league-high 131 RBIs. However, over his last two games, Judge has seven strikeouts over eight at-bats, including one run and a walk. Altogether, he’s been quite disappointing but certainly not deserving boos at this point.

“It happens. It’s happened many a times through my career here. There’s nothing I can do. I gotta play better. That’s what it comes down to. Didn’t do the job tonight, especially as the leadoff hitter. I gotta get on base, make something happen on the basepath and I didn’t do that tonight.”

The Yankees need more from Aaron Judge, and it’s that simple:

Despite the negative attention, Judge answered with class, indicating he must play better, especially with the team struggling to score runs. They produced four against Cleveland on Tuesday but just two in extra innings on Friday, courtesy of a Giancarlo Stanton two-run blast off Shane Bieber in the first inning.

The Bombers are going to find it difficult to push past teams in the postseason if they can’t score runs, meaning they need more from their best players, which focuses on Judge.

Unfortunately, the Yankees have another difficult pitching matchup on Saturday night with Tristan McKenzie on the mound for the Guardians. McKenzie featured a 2.96 ERA this season, pitching six innings against the Tampa Bay Rays in the Wild Card, giving up just two hits and striking out eight batters. McKenzie is a fantastic young pitcher that doesn’t give up many homers and strikes out plenty of batters.

The Guardians have made it clear they are going to attack Judge, specifically in the lower portion of the zone where umpires have a difficult time calling balls and strikes. Judge has been hurt significantly by missed calls this season, given his 6’7” stature.

If Aaron can lay off some of these balls low in the zone and force pitchers to give him something to hit, he may have a bit more success, but over the first two games of the ALDS, he’s been chasing a significant amount.