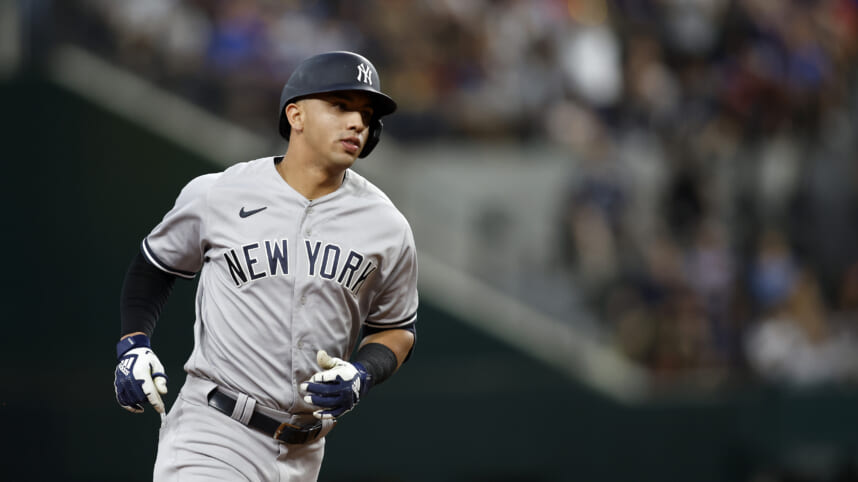 The New York Yankees faced off against the Texas Rangers in Game 1 of the doubleheader Tuesday afternoon. Starting pitcher Jameson Taillon took the mound with just three games left in the regular season.

Taillon was coming off two fantastic performances against Boston and Toronto, giving up just two earned runs across 13.1 innings. However, he struggled a bit against the Rangers, giving up four earned runs and seven hits over 6.0 innings.

The Yankees got production from their youngsters:

Despite Jameson’s spotty appearance, the Yankees’ rookies came to play, with both Oswaldo Cabrera and Oswald Peraza hitting home runs early in the game. This was Cabrera’s sixth homer of the season and Peraza’s first in his MLB career.

Reserve catcher Kyle Higashioka also smashed a solo shot at the top of the 8th inning to tie the game at four apiece. Shortly after, Harrison Bader singled to left field with the infield in, driving in Aaron Judge to give the Yankees a one-run lead.

As for the bullpen, Aroldis Chapman, Greg Weissert, and Jonathan Loáisiga combine for three innings of action, giving up one hit and three strikeouts in total. They got the job done easily, earning the Yankees their 99th win of the season.

In Game 2 of the doubleheader, the Yankees will start Gerrit Cole, who has given up a homer in seven consecutive games and hosted a 4.80 ERA in the month of September.

Cole will be looking to snap that HR streak against a dismal Texas offense. A dominant final start to the regular season for Cole would undoubtedly give management a bit more confidence starting him in Game 1 of the ALDS. Otherwise, there’s a strong argument that Nestor Cortés should get the nod instead.