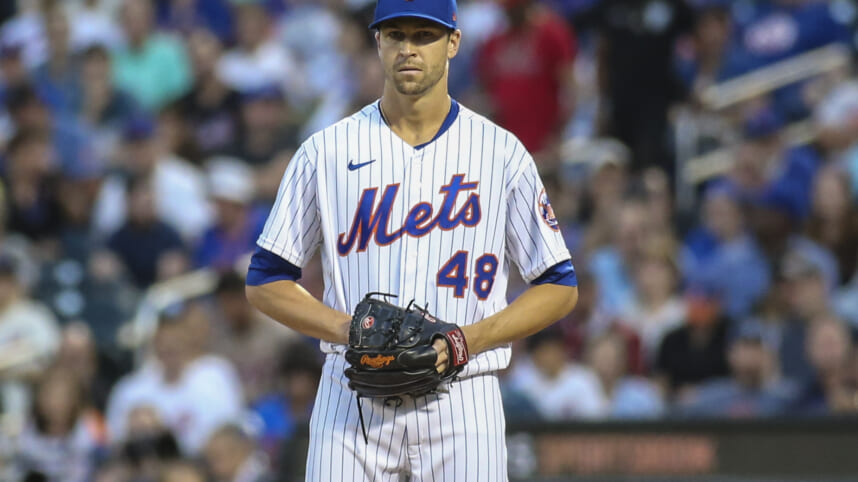 The Yankees have shown initial interest in a lot of the top starting pitchers on the market, but they’ve now begun kicking tires on the best pitcher in the sport.

Per SNY’s Andy Martino, the Yankees requested a medical report from two-time Cy Young winner Jacob deGrom. deGrom’s injury history is a massive question mark as to whether the Yankees should allocate monster resources into bringing him in, but the talent level and the elite stuff are undeniable. With his strong resume since 2018 and blistering velocity, could we see the Mets’ ace go to the crosstown rival Yankees?

Putting Together a Super Rotation:

Jacob deGrom has easily been the best pitcher in baseball since the 2018 season. There are few, if any, categories deGrom doesn’t lead in for pitchers in that time frame, and he’s only gotten better since that point in time.

It’s safe to say this isn’t close either, and that in any season, deGrom can complete ~25 starts, he’ll end up towards the top of the WAR leaderboards for pitchers. Steamer also views deGrom as the top pitcher in baseball, projecting him to lead baseball in pitching fWAR (5.5) in under 170 innings pitched. A projected 2.33 FIP is simply comical, and it’s why there’s no denying that the Yankees would suddenly have arguably the best rotation ever assembled.

Gerrit Cole, Nestor Cortes, and Luis Severino form a formidable top 3, with Montas as one of baseball’s best #4 starters. Throw in the best pitcher in baseball and top 5 pitcher of an ace in Gerrit Cole suddenly becomes the best #2 we may have ever seen. Luis Severino and Nestor Cortes battle it out for the 3/4 spots, and Frankie Montas and his 3.67 ERA and 3.55 FIP since 2021 become your 5th starter.

The elite repertoire deGrom holds is unmatched by any arm in the game, and it would be a spectacle to see him pitch the Bronx in tandem with the remarkable Gerrit Cole.

Jacob deGrom’s arsenal remained largely unaffected by the slew of injuries suffered at the end of the 2021 season and the start of the 2022 season. We saw that his Stuff+ of 132.5 was not much different from the 133.6 Stuff+ we saw in 2021. His fastball velocity remained at 98.9 MPH versus 99.2 in 2021, and the movement profiles on all of his pitches were around the same. These small decimal point changes are within the margin of error for these metrics and thus shouldn’t be seen as signs of regression.

The only notable change to his arsenal was an increase in Spin Rate on his fastball, jumping nearly 100 RPMs between 2021 and 2022. While the question marks about how many starts deGrom can make in 2023 are valid, any concerns about deGrom being on the downturn are completely unfounded.

Should the Yankees Make the Heavy Financial Investment?

Jacob deGrom may command upwards of $40 million a year on a shorter-term deal. The Yankees not only have to retain Aaron Judge but also have to bolster other areas of the lineup. If the Yankees are willing to sign deGrom alongside Judge and make the other necessary moves required to build a well-rounded roster, this is a great idea for the Yankees. They’d secure the best pitching staff in baseball by a wide margin, and they’d also be a threat to finish as a top 3 offense in the sport.

Their young cost-controlled talent in Volpe/Peraza/Cabrera for 2023 is only going to be further supplemented by the onslaught of young position players the Yankees hold at the Double-A level. If deGrom is signed to a 3-4 year deal, the Yankees will have him off the books by the time their young players start to get expensive in arbitration.

This is the type of signing that you make to establish yourself as a team that’s no longer messing around. Aaron Judge, Gerrit Cole, and Giancarlo Stanton won’t be in their primes forever, and now is the time to capitalize on that. deGrom should not be the Yankees’ priority (and I don’t imagine he is), but don’t rule out the possibility of having the chance of having the greatest duo ever assembled in a rotation.