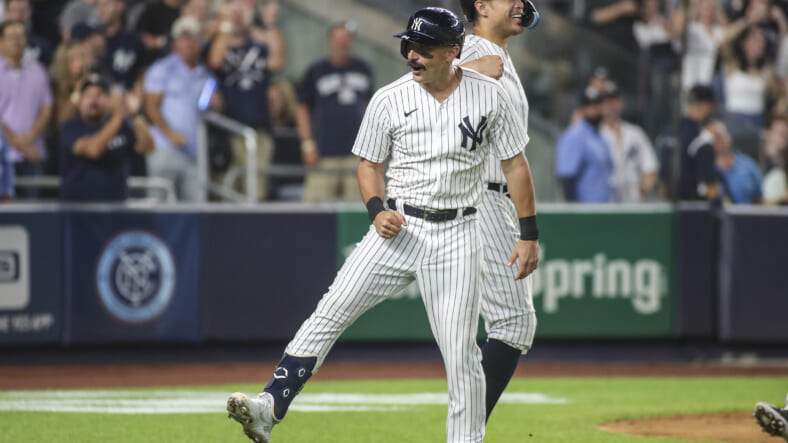 It has been a long few months for Yankees slugger Matt Carpenter on the IL, and it looks like his time there may be nearing its end. Aaron Boone spoke today and said that Matt Carpenter is doing really well in his foot rehabilitation and that he is “in play” to return for the final series against the Rangers.

Matt Carpenter’s arrival would immediately boost this lineup, both on and off the field. There’s no doubting his impact with a bat in his hands, but his role in the clubhouse cannot be understated.

One of the veteran leaders on this squad, Marp’s energy and guidance have carried over to numerous other players. Carpenter was the best lefty bat in all of baseball prior to landing on the IL with a fractured foot, and his bat in the middle of the LU will be a welcome sight.

Where Carpenter would play and what his workload would be right off the IL remains to be seen, but his impact will be undeniable. Matt Carpenter has clubbed 15 HR, OPS’d 1.138 and posted a 216 wRC+ across his 154 PAs this season.

The Mustache Magic could be making its return during the regular season, which would allow Marp to get a few ABs under his belt before the postseason hits in full force.

The Yankees welcomed back DJ LeMahieu off the IL today as well, and he is batting fifth and playing third base tonight.

Many believe that Carpenter would be wasted as a pinch hitter, so it’ll be interesting to see how the Yankees’ lineup is constructed down the stretch. Not having Carpenter’s bat in a big game could be a mistake that costs seasons, but the Yankees have prioritized defense more this year than ever before. Look for Carpenter to potentially suit up next week, and if not, for him to be a much-needed postseason weapon.