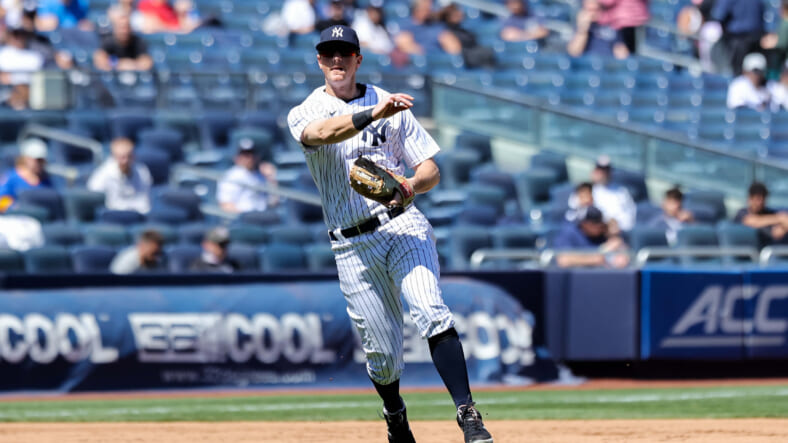 The Yankees have been shut out three times in the last week, so the last thing they needed before a series versus the Rays was an injury to one of their only red-hot bats. LeMahieu has had a toe issue nagging him that forced him out of the lineup against the Red Sox on Sunday, but with imaging still needing to be done, the Yankees are being pre-cautionary and just resting him and going day-to-day with LeMahieu.

With the offense struggling, LeMahieu being red-hot in the last two months, and the infield depth being stretched thin, how can the Yankees manage this situation?

Drawing Parallels From Another Infield Injury:

Anthony Rizzo missed the entire St. Louis series and most of the Seattle series due to a bad back, something the Yankees really took their time nursing back. We’ve seen that the Yankees are not going to rush guys back to play. It’s easy to understand why, they’re up 10 games in the division, and while these divisional games are important, they could still have a strong week without LeMahieu.

The pitching’s been red-hot, and the Yankees finally head back to New York, where they’ve played extremely well. Despite having just a .421 Winning Percentage since the start of July, they’ve won games at a .538 clip at home since the start of July. If they win at that clip against the Rays and Jays at home, they could go 4-2 and take out an entire week off the schedule while gaining a game or two.

The Yankees could use Gleyber Torres getting hot to help them get a spark tonight, and with their 6.89 Runs Per Game at home since July 1st, they might be able to stay afloat.

The Yankees Don’t Need a Hero To Replace DJ LeMahieu:

Whether Aaron Judge decides to go nuclear again, Anthony Rizzo starts putting balls in the seats, or the pitching continues to roll, it’ll come down to the complimentary players to step up. Gleyber Torres and Josh Donaldson need to step up offensively, as the Yankees have only generated a 68 wRC+ and .581 OPS from their cleanup hitters since July 9th. If they can even give a 105 OPS+ combined in this home stand, the Yankees could convert more of their RISP opportunities.

For Torres and Donaldson, they just need to play to the back of their baseball cards. The Yankees need pitchers to be forced to pitch to Judge, and by having better at-bats, working walks, and jumping on mistake pitches, we could see the offense get the spark they need.

Slow and Steady Wins the Race

The last thing the Yankees should do is rush anyone back from injury. LeMahieu is vital to this team’s success, and they need him in October, not in August. I imagine they’ll take things easy with DJ, so fans should keep this in mind. If the Yankees want to win a World Series, it has to be with DJ LeMahieu playing everyday in October.

It just isn’t happening without him, and he’ll be nursed back slowly. I’m no doctor, and perhaps imaging reveals no long-term issues, but there’s zero reason to get him on the field until he’s completely pain-free. Grit through injuries in October, not when you have time to rest before that point. If he does have an IL stint, I imagine it opens the door for one of Oswaldo Peraza or Oswaldo Cabrera to come up, as both are on the 40-man roster. Cabrera’s interesting due to his versatility and whopping .971 OPS at AAA since last season.

DJ LeMahieu’s injury is going to be a day-to-day issue, and his return could be tomorrow or in two weeks, but the Yankees’ focus should be on getting guys to finally step up.