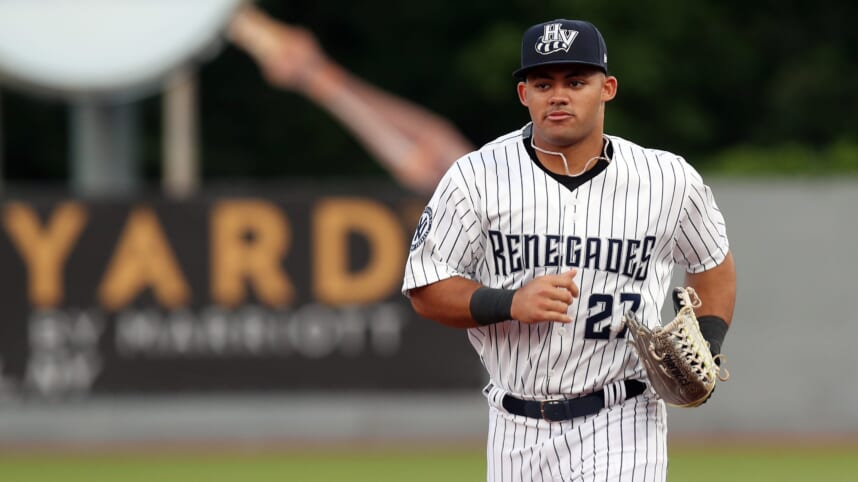 Dominguez is just 19 years old, making him the youngest player on the Patriots by two years. Simply put, his generational talent is showing, and those that doubted him are awfully silent. Randy Miller wrote that Dominguez is struggling to adapt to pro ball and doesn’t have what it takes.

An outrageous claim to say the least, but Dominguez has done well to silence the haters. Across both Low and High A this season, Dominguez has clubbed 15 HR to go with 36 steals and a 13% BB Rate (his K rate also dropped significantly from last year’s 28% clip to a much more manageable 23%. Dominguez has all the tools to be a name stay in the Yankees lineup in the not-so-distant future.

I am on the record stating that I believe Dominguez is our best prospect in the system, even with the illustrious and talented Anthony Volpe.

Jasson is a switch-handed bat that can be slotted anywhere in the LU, with elite hand speed and plate discipline. For a player to exhibit the ability to take pitches and wait on his pitch is one of the more difficult things for an MLB player to adapt, but Dominguez is already doing so at age 19. There’s no doubting his skills and abilities on the field, and it is nice to see the organization believe in him enough to promote him numerous times in one season.

The Yankees have oftentimes been the “Service Time Champs,” where they manipulate a player’s service time so they can get the most out of them. It is annoying to deal with, but I cannot help but feel like Dominguez is in his own classification.

With a 139 wRC+ between Low and High A and an OPS around .860, there’s no denying him his opportunities at this point. I expect Dominguez to tear it up in AA, and Somerset certainly got a good one. The retroactive move to his promotion is the only negative, as Everson Pereira was placed on the IL.