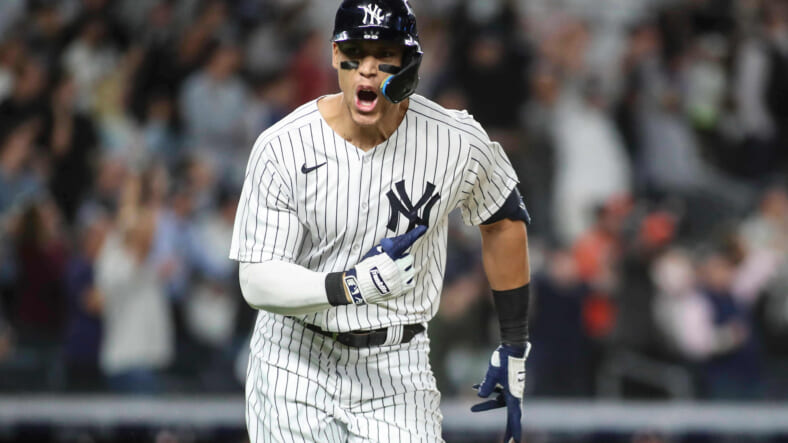 It is no secret the New York Yankees desperately want to retain the services of Aaron Judge, but they will have aggressive competition trying to extend him. The San Francisco Giants seem to be their primary competitor at this point in time, given their financial flexibility, but it is known that Judge would prefer to stay with the team that helped develop him into the superstar he is today.

Owner Hal Steinbrenner spoke to the media several days ago, specifically noting his desire to keep Judge in the Bronx, even though he will likely cost him over $350 million to do so.

The Yankees will have to win the years battle for Aaron Judge:

Ultimately, it comes down to years for Judge. The Yankees may only be willing to offer him seven years on a deal whereas San Francisco may cough up eight or nine, giving him that extra $35+ million he desires.

There is no question the Yankees have the financial muscle to get the job done, but considering Judge is 30 years old, they will likely try to avoid a deal north of seven years. If that’s the case, GM Brian Cashman will have to pay him more year-over-year to get a deal of that nature done, so it depends on how much money Steinbrenner is willing to cough up without risking the team’s ability to spend elsewhere.

Currently, the Yankees have a projected $182.3 million in total payroll after arbitration. That is about $80 million less than what they spent last season, but they still have to make decisions on Judge, Anthony Rizzo, and bringing in a few reinforcements.

One way the team can save cash long-term is to utilize their youth players moving forward, specifically Oswaldo Cabrera, Oswald Peraza, and Anthony Volpe. Featuring those three prospects at prime spots will help keep the Yankees’ cash allocations down, allowing them to spend more on players like Judge and even make a run at starting pitcher Justin Verlander.