Yankees: One bullpen arm that needs to step up in the playoffs 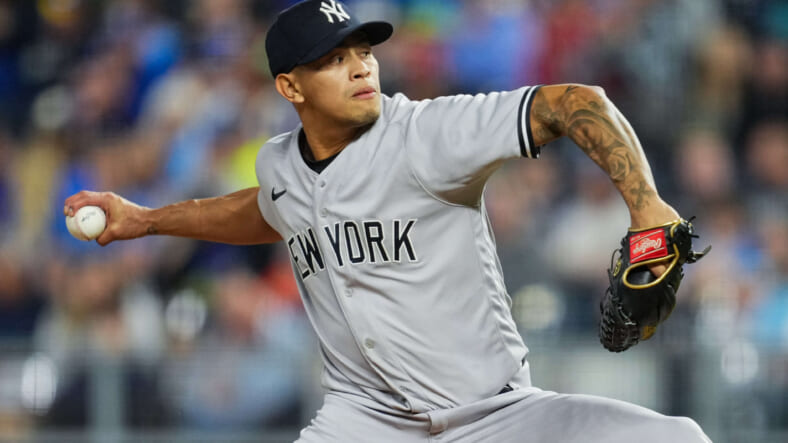 The New York Yankees are playing exceptionally well as the playoffs near, but that doesn’t mean they have their fair share of adversity to conquer.

With polarizing performances in the bullpen, the team will need some of the more prominent players to step up during the postseason, but there’s one relief pitcher that must come to play, given the talent he contains.

There was a legitimate reason to believe that Loáisiga could develop into one of the best bullpen arms in baseball, but he’s had an otherwise polarizing 2022 season. He has a 4.27 ERA, 6.99 strikeouts per nine, a 62.7% left on-base rate and a 60.3% ground ball rate over 46.1 innings.

Most of his positive numbers have regressed tremendously, but he is looking a bit better over the past few weeks. Across 9.2 innings in August, Loáisiga featured a 1.86 ERA, and in September, a 1.93 ERA over 14 innings.

The Yankees are getting the best version of Jonathan Loáisiga lately:

Jonathan‘s stuff has improved dramatically ever since returning from a shoulder injury earlier this season. In fact, in the month of September, his performance has been fantastic. He’s thrown his sinker at 62.4%, generating a .256 batting average against with a 18.6% whiff rate. That is by far his most susceptible pitch, producing a .083 batting average with his change-up. He hasn’t given up a hit this month with his curveball or 4-seam fastball (small 4-seam sample size).

In August, his sinker produced a .238 batting average against, once again not allowing a hit with his curveball and producing a .111 batting average with his change-up. His pitch efficiency has increased tremendously, seeing a slight decrease in sinker usage and more reliance on his lethal curveball. In fact, his curveball produces 57% more horizontal break than the average pitcher but has an otherwise average sinker.

With Frankie Montas suffering a shoulder injury last week, the Yankees aren’t sure how active he will be during the postseason, meaning they may roll with a three-man starting rotation. That could put more pressure on the bullpen to step up, which is why Jonathan Loáisiga could end up playing an integral role during the playoffs.