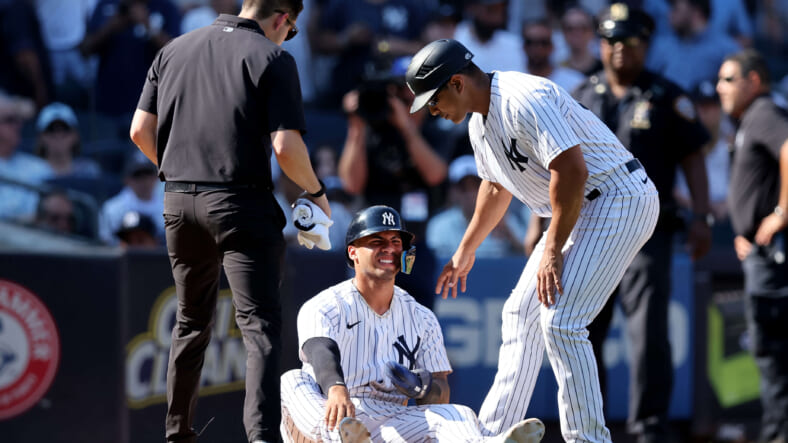 The New York Yankees were spreading the news after Sunday’s heroic win thanks to slugger Aaron Judge. Judge launched a three-run homer in the bottom of the 10th inning, securing his second walk-off victory against the Houston Astros in four games.

However, there were some negatives attached to Sunday’s performance, notably a 16-inning streak of no-hit baseball from the Yankees. The bats were incredibly quiet until Giancarlo Stanton smashed a solo shot to dead centerfield in the 7th inning.

With DJ LeMahieu tying the game at three apiece courtesy of a two-run homer to left-field, the Yankees had an opportunity to walk it off in the bottom of the 9th inning with Aaron Hicks up to bat.

Unfortunately, he struck out, but in the process starting second baseman Gleyber Torres twisted his right ankle returning to third base. Houston catcher Martin Maldonado thew him out, sending the game to extra innings. In Gleyber’s stead, Judge stepped up big offensively, but the Yankees’ infielder could miss a few games with the ankle issue.

“I think we dodged a bullet there,” Aaron Boone said after the game ended.

Boone believes that Torres dodged a bullet, saying that the injury was a minor ankle sprain. Still, ankle injuries can nag and keep players out for quite some time, especially infielders.

Torres is having a resurgent season with the Yankees, hitting .253 with a 30% on-base rate, 13 homers, and 32 RBIs. His 19.2% strikeout rate is the first time in his career he’s dipped below 20% aside from the Covid abbreviated season.

In addition, Torres has a career-best 47.5% hard-hit rate and 11% barrel rate. He’s also mustering 19.8° of launch angle, which is why his power has seemingly returned and his home run totals have skyrocketed after failing to reach double digits since 2019.

While Torres is rehabilitating, the Yankees will likely utilize DJ LeMahieu and Marwin Gonzalez to supplement the loss.