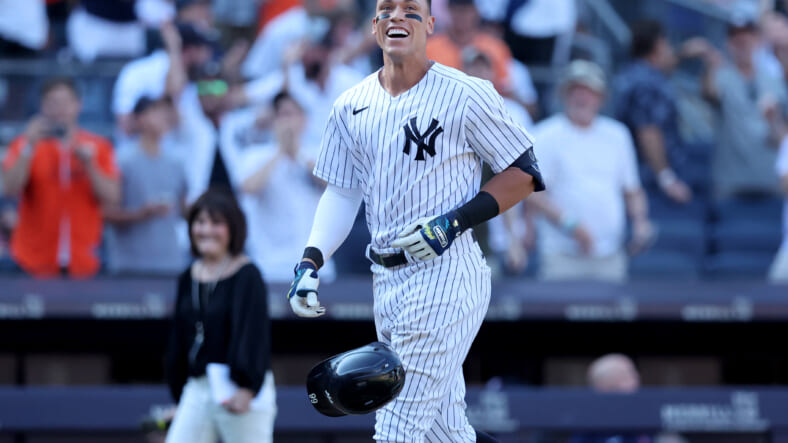 The New York Yankees have no intention of letting Aaron Judge join another team in free agency next off-season, but unless they’re willing to open up the checkbook, they may lose out on the star slugger. Judge is having an MVP-caliber campaign, hitting .289 with a 36.4% on-base rate and career-best .629 slugging percentage.

Judge is currently on pace for over 60 homers, hitting 28 so far in the season over 73 games. He hosts a personal best 60.5% hard-hit rate, 24.4% barrel rate, and 95.5 mph exit velocity. His slugging metrics are simply unbelievable, but he’s also made a defensive shift to centerfield, increasing his value even further.

If the Yankees aren’t willing to drop an exorbitant amount of cash to extend Judge, another team will, and that is the biggest fear of every Yankee fan.

According to Jon Heyman of the New York Post, the three teams that could steal Aaron Judge are:

Considering Judge is from San Francisco, the Giants might have a bit more sway in free agency. The question is, is Judge willing to leave the Bronx and everything he’s built behind?

Of course, wherever Judge goes he will be an immediate facelift for any franchise, but he has established roots with the Bombers, who have groomed him since he was drafted back in 2013.

The Yankees simply can’t let Judge leave to go to the Boston Red Sox, one of their historical AL East rivals. The Red Sox have plenty of cash with multiple free agents hitting the market, but stealing Judge could be their big entrance back into the fold.

The Los Angeles Dodgers might be one piece away from becoming a dynasty team. Aaron would undoubtedly put them over the edge with talent. Heading back to the West Coast might be attractive for the 30-year-old slugger, but it seems he’s grown accustomed to the cold winter in New York. However, the electric atmosphere in Yankee stadium is majestic, and Judge continues to rave about the fans and their energy after every game.

While Judge will undoubtedly hear other teams’ proposed offers in free agency, the Yankees would be embarking on a huge risk by letting him walk. Given how much he means to Yankee fans and his overall production, journeying on without him would be devastating.

Even waiting a few years to acquire Juan Soto seems too far away. At the end of the day, the Yankees are one of the most profitable teams in baseball, they can surely afford to go above and beyond to retain their best player.