Yankees’ Joey Gallo knows he might be traded at the deadline 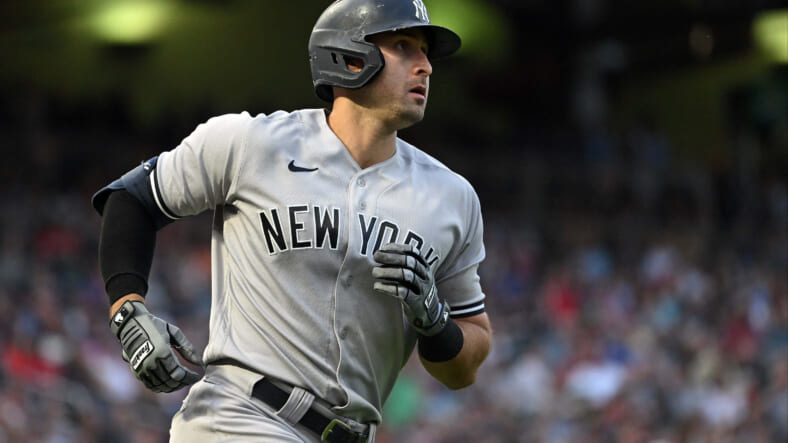 Unless New York Yankees slugger, Joey Gallo, has a phenomenal July, general manager Brian Cashman must replace him in the outfield. In June, Gallo hit a putrid .138 with a 26.3% on base rate. He struck out 32 times over 65 at-bats, a near 50% rate.

That type of production simply can’t be tolerated at the major league level. So far in July, Gallo is hitting .176 with a 36.4% on base rate, far better than his previous numbers but, unfortunately, still well below expectations. Against the Boston Red Sox, Gallo has tallied one hit, two RBIs, and two walks, striking out just once.

Gallo seems to be a bit more comfortable the past few games, desperately trying to prove his worth before the deadline. However, he understands that the MLB is a business, and the team could move him despite his wishes to stay in pinstripes.

“I’m aware of that possibility,” Gallo told Dan Martin of the New York Post several days ago. “I’ve been in the league a while and I understand if you’re not performing, things can change quick. For me, I don’t see myself being anywhere else. I think we have a great team here with great chemistry. We’ve got the best record in baseball and I don’t envision myself anywhere else. I want to be here.”

Whether it be the psychological nature of being a New York Yankee or a lengthy cold streak, Gallo needs to figure things out quickly. Unless he smashes 10 homers this month, it will be difficult to justify his retention.

The Yankees can’t continue to roll with Joey Gallo offensively:

Joey essentially begged the Yankees to keep him at the deadline and continue instilling faith in his abilities, but at some point, Cashman needs to think about winning the World Series. Praying an individual player begins to perform is a risky move.

Gallo’s struggles can be dated back to 2021 when he hit .160 with a 38.6% strikeout rate after joining the Yankees from Texas. The constant negative attention and overwhelming nature of Yankee fans clearly isn’t an easy task.

Nonetheless, the right field position is up for grabs, and Cashman may look to inject more talent there within the next few weeks.