Yankees getting starting pitching reinforcements at the perfect time 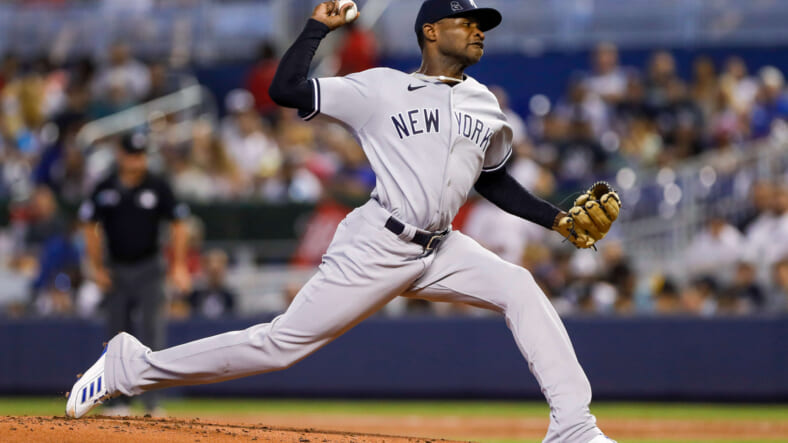 The New York Yankees starting pitching rotation has faced a bit of adversity lately. Specifically, Nestor Cortes had a tumultuous June and has started July on a similar note. Against the Boston Red Sox on Friday night, Cortes gave up four earned runs over eight hits in just 3.2 innings. In fact, in four of his last six games, he’s given up three earned runs or more, showing a bit of fatigue before the All-Star break.

Cortes has only pitched over 70 innings once in his career prior to the 2022 season. He’s already reached 88.2 innings this season, close to reaching his career-high of 93 innings last year.

With that being the case, the Yankees could use reinforcements, which is where Domingo German enters the picture.

The Yankees are close to getting Domingo German back:

German was recently elevated to Triple-A Scranton, where he will continue his rehabilitation. German has already made three rehab assignments with Tampa and Somerset. He’s given up just one earned run over 7.1 innings of action in his last two starts, so he’s ready to make the jump to Triple-A and speed up his return.

There is hope that German can make a comeback to the rotation within the next few weeks, which would help mitigate fatigue ahead of the All-Star break. Last season, German recorded a 4.58 ERA, posting 8.97 strikeouts per nine rate and a 42.2% ground ball rate.

German’s velocity is down a bit compared to his 2018 season, recording a 93.5 mph fastball on average in 2021. Coming back from significant shoulder issues, he will be looking to hit that number, if not exceed it. Last season, he threw his fastball 43.6% of the time, mixing in a 4-seam and sinker.

Pitching coach Matt Blake will look to extrapolate on German’s sinker, a pitch that could help the rotation down the stretch if the Yankees don’t make any moves at the deadline. There have been reports that general manager Brian Cashman is eyeing Luis Castillo from the Cincinnati Reds. This is a rumor that pops up every deadline.

However, the team seems to be committed to giving German a legitimate opportunity. His impact could be huge for the starting rotation, which clearly is regressing after heavy usage over the first half of the season.