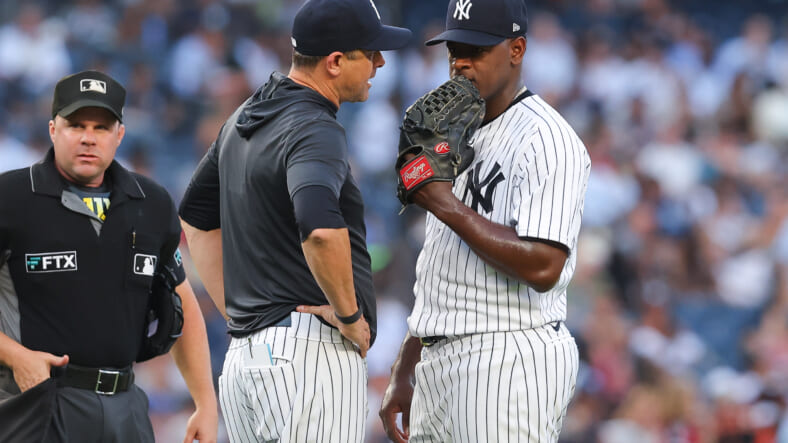 The New York Yankees are facing a conundrum in the starting pitching rotation after losing Luis Severino to a minor lat strain on Wednesday. Severino pulled himself after the 2nd inning due to the injury, stating he woke up feeling a bit off.

The 28-year-old pitcher has had a fantastic resurgent season after recovering from Tommy John surgery in 2021. Over 86 innings this season, Severino hosts a 3.45 ERA, 9.94 strikeouts per nine, and an 81.2% left on base rate. His strikeouts are down a bit from past years, and he’s walking 2.62 batters per nine, but he’s still been extremely effective for the Yankees as one of their top starters this season.

Severino doesn’t believe his injury to be anything too serious, which is a great sign ahead of the All-Star break. A few days off should help ease his pain and allow him to rehabilitate.

“I’m not an expert in injuries, but I don’t think it’s [anything] bad,” Severino said.

Despite Severino’s calmness, star slugger Aaron Judge expressed how big of a blow losing him is.

“That’s a big blow,” Aaron Judge said. “He’s our No. 2. He’s been pitching the ball well this year. But it’s 15 days, I feel like all our starters should get a little time on the IL just to rest up.”

The rest of the Yankee starting rotation has also been a bit iffy. Nestor Cortes had himself a solid outing against the Cincinnati Reds on Thursday night, giving up just one run over seven innings, but Jameson Taillon and Jordan Montgomery have both had their fair share of struggles.

Taillon has given up 11 runs in 10.1 innings over his last two starts, a problematic metric that could force general manager Brian Cashman to make a move at the deadline. In fact, Taillon posted a 4.59 ERA in the month of June, giving up 17 runs and 40 hits over 33.1 innings.

The Yankees may have no choice but to go after Luis Castillo:

With Luis Castillo available for the right price, Cashman could have to get a bit more aggressive in his pursuit. Given the unlikelihood they go after Andrew Benintendi or Michael Taylor due to their vaccination status, Cashman may be more willing to spend big on a starting pitcher.

Hopefully, Severino‘s injury doesn’t keep him out for too long, especially with the bullpen having issues. In Jonathan Loiasiga’s first outing since May 22, he gave up three earned runs over four hits in just 0.2 innings. Lucas Luetge gave up two earned runs and three hits, blowing an opportunity for the Yankees to steal a win late in the game.

Unless the offense can start posting double-digit runs per game, the Yankees will need more pitching support with fatigue setting in.