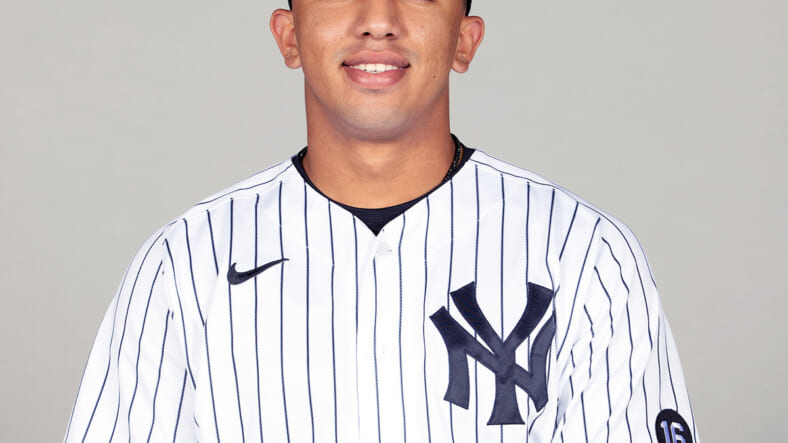 The New York Yankees dodged a major bullet with star shortstop prospect Oswald Peraza on Sunday afternoon. The 22-year-old infielder from Venezuela was plunked on the hand by a wayward pitch, hitting between his pinky and wrist.

Peraza walked around in obvious pain for a few minutes before being taken for x-rays. If the Yankees call Peraza up to the major league team after August 18, he won’t accrue any service time. That’s a strategy used to preserve future value, especially if the Yanks plan to float him in trade talks over the winter.

Peraza has been fantastic lately:

This season, Peraza hosts a .258 average with a 33% on-base rate and a .447 slugging percentage. He’s totaled 15 homers with 42 RBIs and an impressive 26 stolen bases. Peraza has struck out 81 times over 322 at-bats, but he has elevated his game to elite status in Triple-A over the past two months.

There is a clear argument that Peraza should be playing with the Yankees at this point, especially after stringing together several months of dominant play with Scranton.

Here’s the Oswald Peraza HBP. After this, it looked like he wanted to stay in the game, but he lost that battle. pic.twitter.com/GKc75nWMiX

The star SS will probably have a sore hand for a few days and miss a minimal amount of time, but management is likely ecstatic about the injury news, especially with the August 18 service time date coming up quickly.

There’s no guarantee the Yankees will pull him up and give him a chance:

However, general manager Brian Cashman advocated for Isiah Kiner-Falefa over the weekend, noting his defensive qualities. The Yankees can still keep IKF in the lineup but simply move him to third base. Kiner-Falefa won a Gold Glove with the Texas Rangers at 3B. They can slot Peraza in at shortstop, taking Josh Donaldson out of the lineup where he’s been disappointing.

Considering IKF hasn’t hit a home run the season, and Peraza has already launched 15 with Scranton, the Yankees could use the firepower. Nursing a five-game losing stream, the Yanks could use the support.