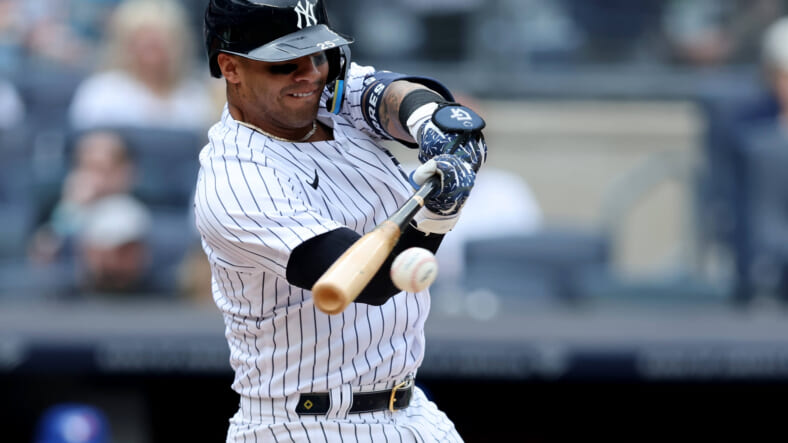 The New York Yankees, represented by Brian Cashman, have been in discussion regarding trades at the GM meetings in Las Vegas this week. Cashman specifically noted that he’s discussed his abundance of infielders and spoken about prospective deals that could go through with free agency opening up.

Out of the Yankees’ crop of infielders, the most intriguing options are Gleyber Torres, Oswaldo Cabrera, and Oswald Peraza. However, we know the Yankees are open to the idea of sending Torres on his way, given they floated him at the trade deadline in exchange for Miami Marlins starting pitcher, Pablo López. Torres is coming off a solid 2022 campaign, hitting .257 with a 31% on-base rate, 24 homers, and 76 RBIs. He logged a 115 wRC+, his best number since the 2019 season.

The Yankees know what Gleyber Torres is:

Offensively, the Bombers know exactly what Gleyber brings to the table, streaky hitting with solid power. He posted a career-high hard-hit rate at 44.9% and a career-best 10.7% barrel rate. His 90.4 average exit velocity was the highest in his career, which was reflected by his double-digit home run totals. However, he relied heavily on the short right porch in Yankee Stadium to get the job done, a strategy put forth by hitting coach Dillon Lawson.

Defensively, Torres had his best season as a professional, earning a .985 fielding percentage with seven errors. He enjoyed nine defensive runs saved above average, suggesting he made a positive impact for the Yankees on defense, flipping the script on his rather uninspiring performances at shortstop in the past.

Torres could be the key piece in a trade to acquire another starting pitcher, rounding out the rotation. They are expected to pass on offering Jameson Taillon the qualifying offer, letting him hit free agency without much pursuit. They may present him with a cost-efficient contract or look to find another starter with similar value at a cheaper price point. It is possible Cashman still has his sights set on Pablo López from Miami, who won’t be a free agent until 2025 and is arbitration eligible this off-season. López finished the 2022 season with a 3.75 ERA, 8.70 strikeouts per nine, a 74.2% left-on-base rate, and a 46.1% ground ball rate.

López is a quality young starter at just 26 years old, and at 6’4″, 225 pounds, he’s an imposing pitcher on the mound. The Yankees may want to extrapolate on his talents, but it will undoubtedly cost them given the team control.

While Gleyber does have some intrinsic value, other teams may view Peraza as the real asset. The 22-year-old infielder earned a perfect fielding percentage over an 18-game sample size to finish this most recent season.

Over 57 plate appearances, he earned a .306 average with a 40.4% on-base rate, one homer, and two RBIs. Those numbers will undoubtedly even out during a full year of action, but he showed enough to warrant significant interest this off-season. It is possible the Yankees look to move Peraza with Anthony Volpe likely in the mix at shortstop next year. Personally, though, I would suggest the Yankees utilize both Peraza and Volpe next season, allowing them to save money in the infield so they can retain Aaron Judge and continue to add elite post-season hitters.