Yankees’ Aaron Boone raves about young shortstop prospect, who could be the future 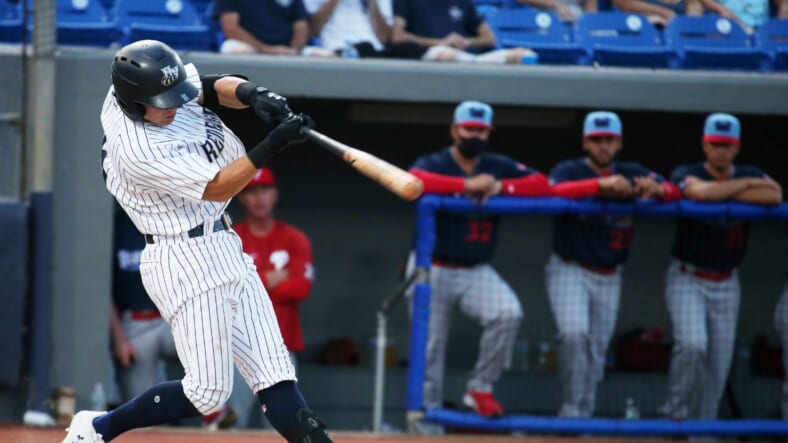 The New York Yankees have a big decision to make at shortstop this off-season after the lockout eventually ends, but the existence of one if not two stud infield prospects have thrown a wrench into their potential plans.

If there weren’t a few youngsters climbing the ranks at an impressive rate, the Yankees might be more willing to spend $300+ million on a 10-year deal for Carlos Correa. However, it doesn’t seem as if they are as intrigued by the option with Oswald Peraza and Anthony Volpe flying through their farm system.

Peraza has a bit more experience than Volpe and could get the first crack at the shortstop job, but skipper Aaron Boone provided rave reviews over the 20-year-old phenom out of New Jersey.

“Special guy. I’ve seen him a couple times this winter at different events … He’s showing that he can really play and obviously someone we’re incredibly excited about.”

Volpe has displayed multiple tools that could lead him to be a star Major League player, including heightened athleticism and patience at the plate. Volpe featured predominantly with Hudson Valley and Tampa last season, playing in 109 games and recording a. 294 average with 27 Homer‘s and 86 RBIs.
Impressively, he also stole 33 bases, being caught on just nine attempts. He recorded 78 walks and 101 strikeouts over 412 at-bats. His numbers dipped slightly with Hudson Valley compared to Tampa, but his production was still sufficient in many categories.
The Yankees view Volpe as a potential long-term solution, and many are comparing him to some of the greats from the past. At just 20-years-old, we can expect to see him feature in AA this upcoming season and maybe make an appearance in Scranton with the AAA affiliate.
However, if his development goes as planned, the Yankees will want to find a stopgap for the next season or two in preparation for the young guns to take over. That would essentially rule out Carlos Correa as a free agent target but may point toward a stopgap like Andrelton Simmons or even Trevor Story on a big-money but low-year contract.
Nonetheless, the way management has spoken about Volpe in recent days says a lot about their confidence in him moving forward.