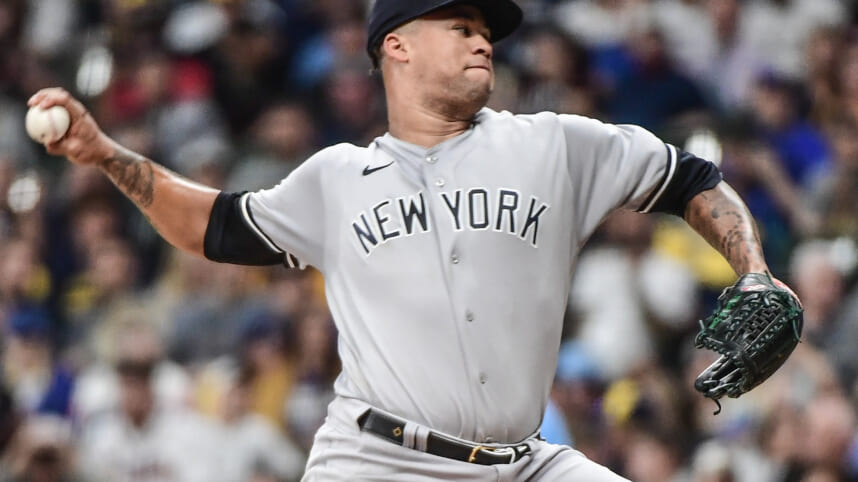 Yankees starter Frankie Montas had struggled to get any sort of rhythm in pinstripes prior to landing on the IL with a shoulder issue, and today, Aaron Boone spoke on what he thinks Montas’ role will be, come October.

Hopefully, Montas is going to be fully healthy and ready to pitch big innings, but that could be wishful thinking. Bryan Hoch recently tweeted out that Boone said, “it will be tough, time-wise, to get Frankie Montas back for the playoff rotation” and that an opener role could be in the cards.

Montas’ tenure with the Yankees thus far hasn’t gone according to plan, and many fans are starting to get similar feelings that they had when Sonny Gray struggled to adapt.

The Yankees haven’t gotten the best out of Frankie Montas since the acquisition:

Since joining the Bombers, Montas has only posted two starts where he went at least six innings, and he gave up 6 runs and 4 runs in those two starts. He’s posted a 6.35 ERA to pair with a 4.93 FIP. Frankie the Yankee has the stuff to succeed under the bright lights, but if he is able to come back and be added to the postseason roster, he has to be better than he’s shown.

If Boone can see Montas being utilized in a relief role, I do concur. He has struggled getting through the order for the second time, and he seemed to be tentative and lacking confidence in his pitch mix. Montas’ stuff can play up in a bullpen role or even an opener role, and if he can go out there and shove for three innings and keep a lead or tie, that’s all I can ask for.