Yankees: 3 players coming up short in the playoffs 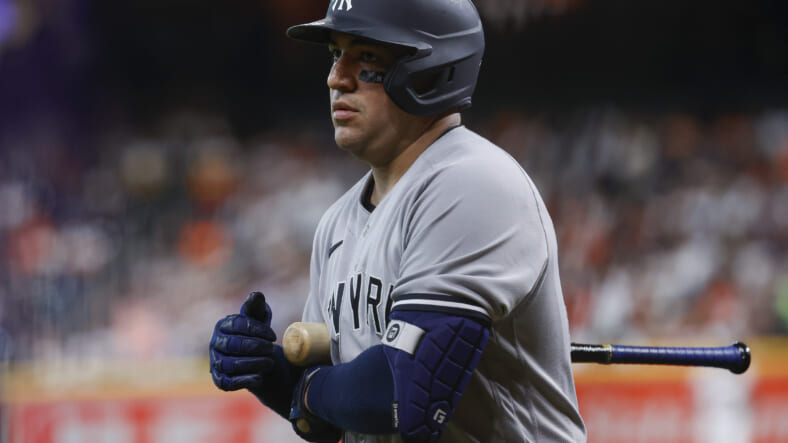 It takes an entire team playing at the peak of their abilities to win a World Series, which is something the New York Yankees haven’t gotten out of their club the past few years.

Individual talent isn’t enough to overcome great playoff teams like the Houston Astros, who normally contain incredible pitching in both the starting rotation and bullpen.

With that being said, the Yankees have plenty of quality pitching to match up against any opponent this postseason, but their offense is polarizing in nature.

They continue to rely on the home run as their primary source of production, which can be a recipe for disaster. The Bombers hit two solo homers against Houston on Wednesday night in Game 1 of the ALCS, but with nobody on base, they didn’t amount to much.

With that being said, there are three players who have struggled considerably to get on base and help the team since the start of the playoffs against Cleveland.

Three players coming up short for the Yankees in the playoffs:

Josh Donaldson might have a 37.5% on-base rate, but he’s only worked one walk over his last four games after recording four in his first two games against Cleveland. He struck out nine times since then, recording just two hits and failing miserably to get on base for the most part.

The reality is simple, the Yankees have been trotting Donaldson out as their No. 5-6 hitter, and he simply isn’t offering any value at this point in time.

There is an argument to make that the Yankees should bench the veteran infielder, but they don’t have any options to supplement him with. The only logical alternative would be to start Oswald Peraza at shortstop and Isiah Kiner-Falefa at third base, who’s won a Gold Glove on the hot corner before.

It’s a risk given IKF has struggled defensively this post-season, but he offers a better chance of getting on base than Donaldson, who is essentially an automatic out right now.

The only infielder that isn’t struggling is first baseman Anthony Rizzo, who’s come to play in the playoffs. However, the Yankees have been trying to force production out of Gleyber Torres, batting him lead-off the past few days.

Unfortunately, that hasn’t worked out quite well, as he’s hitting .130 with a 20% on-base rate across six postseason games. He struck out twice in four at-bats against Houston in Wednesday’s loss, showcasing next to no value as an offensive threat. He walked twice against Cleveland, driving in two runs. His inability to get on base the past few days has severely limited his team’s ability to drive in runners in scoring position.

Ideally, the Yankees have a high on-base percentage player in front of Aaron Judge, and Torres simply isn’t that. In fact, they’re better off putting Anthony Rizzo as the lead-off batter since he hosts a 48% on-base rate to start the playoffs, which is exactly what Judge needs to get going.

If you wanna talk about lack of offensive production, look no further than catcher José Treviño.

There’s no taking away from the incredible regular season Treviño enjoyed, but playoff baseball is a different beast. The 29-year-old is hitting .067 with a 6.3% on-base rate across 15 at-bats. He’s failed to earn a walk and has just one to hit in the playoffs, striking out six times.

The problem is, the Yankees can’t really replace Treviño with Kyle Higashioka, considering the vast defensive drop-off. However, Kyle did have some competitive at-bats against Cleveland, which may force the Yankees’ hand, given Treviño has been an automatic out up to this point.

Higashioka isn’t bad enough defensively to be detrimental to the team’s success, but if he can offer a bit more on the offensive side, manager Aaron Boone may have to force a change there.