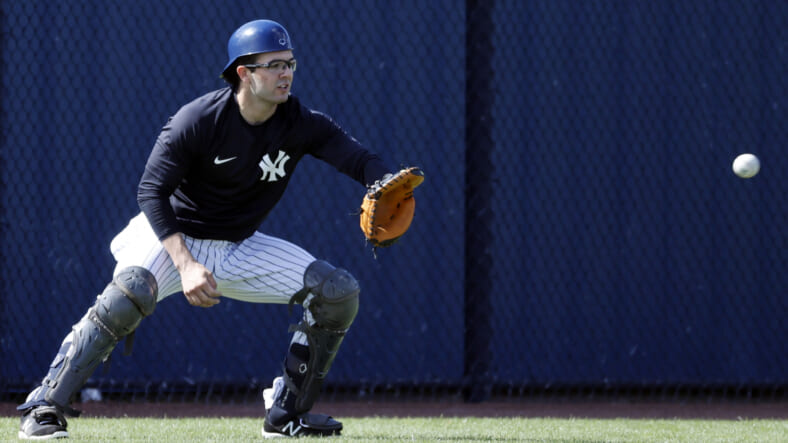 The Yankees are moving towards a youth movement for the 2023 season. While I don’t doubt that they’ll explore bringing in talent externally, they have plenty of young players ready to take on roles at the Major League level in 2023.

Finally, the Yankees and the F.O are seeing the fruits of their farm, and it’s worth being very excited about. While the Yankees have failed to capture a World Series title in the Baby Bomber era, they’ve improved dramatically in terms of development, drafting, and scouting. Prospects are always a risk, but they’re still remarkably talented players that can make positive contributions.

Before we begin this list, I’m leaving off Anthony Volpe, Oswald Peraza, and Oswaldo Cabrera. We know these infielders will play a role on the 2023 team, so I want to focus on prospects that have a little more risk to them.

Three prospects who could make an impact for the Yankees in 2023:

Stephen Ridings had burst onto the scene in 2021, but a slew of injuries caused him to miss the entirety of the 2022 season. He threw just two innings in rehab, but it was too little too late for a Yankee club gearing up for a playoff run. Ridings’ sample size is remarkably limited, with just 31 MiLB innings since the start of 2021. In that small sample, he’s bullied hitters to the tune of a 1.16 ERA and 39.0% K% with just a 3.4% BB%. There’s no hiding the fact that he has elite stuff, and while he’s a massive injury risk if he has a healthy 2023, he’ll be able to dominate batters. One of the few metrics we have that stabilize very quickly is Stuff+, a stat I’ve discussed heavily in multiple articles. Stuff+ measures a pitcher’s velocity, movement, spin rates, and a variety of other factors that tell us just how good a pitch is. At a 116.9 Stuff+, slotting him in the top 30 among all pitchers with 50 or more pitches thrown in the 2021 season.

With a blistering fastball that generates a lot of horizontal movement and good riding action alongside a slider with tons of drop, all it takes is watching a couple of innings of Stephen Ridings to understand how Stuff+ models love him so much. At his 6’8 frame, Ridings gets tons of extension on his fastball as well, thus giving him ridiculous perceived velocity. Statcast details that Ridings has both a Sinker and Four-Seam Fastball, but both generate such similar movement and velocity that it’s likely that they’re the same pitch. It’s still an explosive fastball regardless, and it is a huge weapon in his arsenal.

Elite stuff is extremely encouraging, and while there were command concerns in his small sample, he never ran a high BB% in his time as a Yankee at the Minor League level. He had a tendency to leave pitches over the plate, but his stuff is so elite that he can get away with it more often than other arms can. The Yankees are going to have some spots in the bullpen up for grabs with the departure of Chapman, Britton, Green, and Castro to go alongside the injury to Scott Effross. With a healthy offseason, he should be ready for Spring Training, which will give us a chance to get more pitch data on him. If he’s able to have a healthy Spring and show off that same elite-level stuff, I don’t see how he doesn’t find himself in the bullpen in some capacity during the season.

In 2022 Andres Chaparro showed off some insane offensive skills, absolutely scorching the baseball in 71 MiLB games across the CPX, A, and AA levels. Chaparro displayed both elite power and strong hit tools, a combination we rarely see for 23-year-olds in the higher levels of the Minors. It wasn’t enough for Andres Chaparro to hit 20 HRs and slug nearly .600, he also had to hit .296 with a sub-20% K% and .370 OBP. His xwOBA at the MiLB level graded out as an 80/80 grade, and he’s reached some insane Max Exit Velocities. It’s possible that Chaparro is able to post the best wRC+ in 2023 out of the 2022 and 2023 prospect call-ups, and we can argue he has the best offensive tools out of anyone in this farm system, including Anthony Volpe.

The Yankees aren’t lacking in power necessarily, but they haven’t got great offense at the 3B position since the 2020 season. Chaparro provides some great power, and he’s shown the ability to generate tons of contact and not whiff much. His approach at the plate is great, and it’s hard to imagine that Chaparro isn’t at AAA to start 2023 since he’s going to get a lot of looks in Spring Training now that he’s established himself as one of their best bats in the farm.

Few players excite me as much in this farm system as Andres Chaparro, not because the farm isn’t good, rather because I believe there’s a chance we have a 120-130 wRC+ hitter here in Chaparro. His glove isn’t too bad either at 3B, though this year wasn’t a great year for him at the position (-3.3 FRAA). In 2021 he posted a 6.2 FRAA, so perhaps the injury he suffered during the season caused some issues defensively. He’ll get looks at 1B as well, as he registered over 140 innings at 1B for the Somerset Patriots in the past season. Some added versatility alongside his advanced bat should fit the Yankees’ changing model of having defensive versatility and excellence at nearly every position. Andres Chaparro might be the least well-known player on this list, but I’d argue he’s the most prepared to make a huge impact for the 2023 Yankees.

Austin Wells was the Yankees’ First-Round Pick in the 2020 draft out of the University of Arizona (Go Wildcats!), and he’s been anything but a disappointment. He slammed 20 HRs in 92 games in 2022, positing a 145 wRC+ from the left-handed side. He also swiped 16 bags without getting caught once, which is impressive considering the reputation for catchers. Many people expected Wells to be someone who eventually transitions to another position like 1B or LF/RF, but he’s taken massive strides defensively. Baseball Prospectus has defensive metrics for MiLB players, and their catching metrics are the most in-depth data we have for catchers at any level. MiLB data (especially defensive data) should be taken with a grain of salt, but Austin Wells was not just a good defender, he was an elite defender by Baseball Prospectus’ catching metrics.

Wells is average in the blocking department and provides good value in stopping the run game, throwing out 24.6% of runners in a large sample (130 attempts), and while the runners caught on a per-rate basis is pedestrian (SB success rate sits around 75-80%), the volume of 130 attempts is extremely high and so that average per rate is more valuable. Jose Trevino posted 1.5 Throwing Runs, and Kyle Higashioka posted 0.0, though both posted higher CS% numbers. Wells wouldn’t be a defensive upgrade over Trevino, but perhaps he could get close to matching Higashioka’s defensive value. Wells posted 9.4 Framing Runs in 5,050 attempts while Higashioka posted 9.3 Framing Runs in 4,166 attempts, and while this clearly shows Higashioka is the better framer on a per-rate basis (which is indisputable), it does show that Wells can get pretty close. If Wells is capable of being ~80% of what Higashioka is defensively, he’ll be one of the top catchers in the game.

It’s possible Austin Wells is able to provide a near 120 wRC+ bat (if not more) and be one of the better defenders behind the dish. He’s also capable of playing the corner outfield and first, and while he hasn’t done it since college, he’s a great athlete and could provide at least decent value in a corner outfield spot with his arm. The Kansas City Royals use catcher MJ Melendez in a role like this, playing him in the outfield alongside splitting catching duties with Salvador Perez, and while Wells is the far better defensive catcher, it does allow him to get ABs at the Major League level without taking away Jose Trevino’s playing time and defensive mastery.

The 2023 Yankees are going to need a spark from their youth if they want to finally capture a pennant for the first time since 2009, and these three are going to play a role in how far this team is going to be able to go.