The Yankees have a Joey Gallo problem at the trade deadline 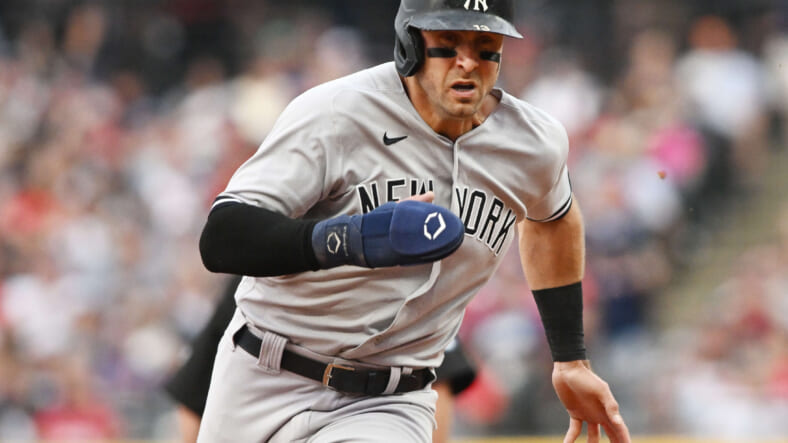 The New York Yankees have instilled plenty of faith in slugger Joey Gallo, but he hasn’t reciprocated. Gallo has struggled considerably this season to produce on offense, recording a season average of .161 in the batter’s box, hosting a 28.6% on-base rate and .327 slugging percentage, the worst in his career.

“Couple really good at bats [Thursday] night where he worked walks in a tight game — nobody ever mentioned those,” Boone said of Gallo. “He’s grinding. It’s a challenge. It’s been a struggle without question.”

Even manager Aaron Boone indicated that it’s been a serious struggle for Gallo and the Yankees, helping him return to form.

“He has had some good at-bats along the way here, I feel like over the last week or 10 days [but] hasn’t got a lot of traction with hits.”

The Yankees are seeing the hard-hit metrics but not the production:

The main problem is that Gallo hosts an unbelievable WHIFF rate. He’s whiffing on 36.1% of fastballs, 47.1% of breaking balls, and 44% of offspeed pitches. Gallo simply just doesn’t make contact enough, and when he does, it’s inadequate.

Considering Joey is currently in the middle of a one-year, $10.3 million deal, the Yankees have to make a big decision on his future with the team at the trade deadline. The question is, does Gallo have enough value to be traded, and would a club be willing to consume his contract and offer something in return?

It is possible that the San Diego Padres are interested in Gallo. There must be a team that is seeking a lefty slugger who is having psychological issues with the Yankees rather than skillset deficiencies.

Gallo even stated recently that he’s aware that being traded is a possibility at the deadline. Aside from the Padres, the Philadelphia Phillies and Texas Rangers make sense. Gallo had some of his best seasons with Texas, so they may be inclined to bring him back as a contributor on offense.