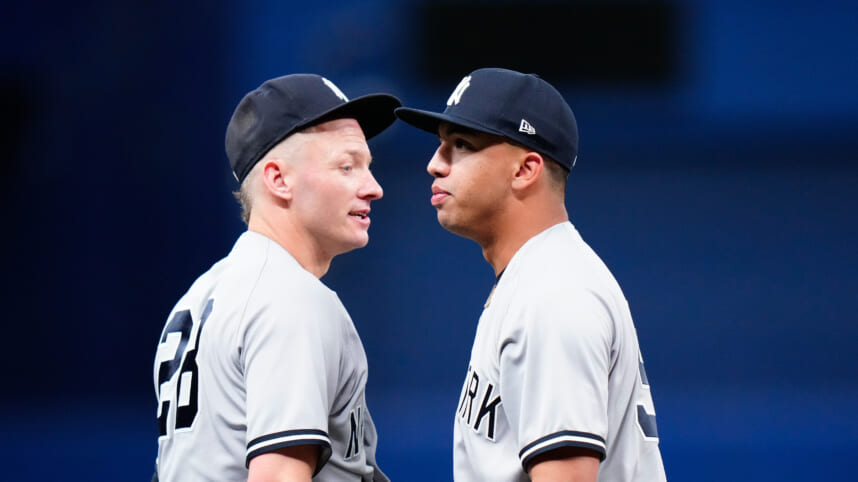 With New York Yankees pushing past the Cleveland Guardians to make an appearance in the ALCS against the Houston Astros, they have a few big decisions to make regarding the roster.

With Aaron Hicks suffering an injury and some potential roster moves, manager Aaron Boone certainly has his work cut out for him before Wednesday night’s game in Houston.

The Yankees did face a bit of adversity at specific spots during the ALDS, notably shortstop and left field, now that Hicks is out for the rest of the season. Andrew Benintendi isn’t ready to make a return, given he’s experiencing wrist pain. However, there are several other pitches and two position players who could end up being swapped in.

If the Yankees activate DJ LeMahieu for the ALCS, he won’t be 100%. DJ was taking batting practice on Tuesday before Game 5, looking solid enough to play if need be.

Seemingly, he would replace Marwin Gonzalez as the team’s utility man coming off a solid 2022 season. The 34-year-old infielder hit .261 with a 35.7% on-base rate, including 12 homers and 46 RBIs. However, he is a fantastic postseason player, hitting .272 with a 34% on-base rate, three homers, and 11 RBIs in just 21 games over the course of his career.

There’s a very strong argument that DJ should be considered over Gonzalez, even if he isn’t 100%.

The Yankees traded for Oakland Athletics starting pitcher Frankie Montas with the postseason in mind. They believed he could be one of their top arms in the rotation, but he struggled with the Bombers, earning a 6.35 ERA and just 7.49 strikeouts per nine. He has one postseason appearance to his name, struggling considerably back in 2020.

However, the Yankees won’t utilize him as a starter this time around but rather out of the bullpen in high-leverage situations or middle-innings relief.

It is possible the Yankees activate Montas and take Lucas Luetge out of the postseason bullpen unit, but that would erase another lefty arm from their arsenal. The more likely scenario is he replaces Miguel Castro, who the Yankees would like to avoid in a big moment against the Astros this upcoming series.

The Yankees ran into some trouble at shortstop, with Isiah Kiner-Falefa struggling defensively. Manager Aaron Boone was likely kicking himself for not including Oswald Peraza on the roster, but I don’t believe he will make that mistake again.

Peraza can take the vacant spot left by Aaron Hicks and compete immediately, shifting Oswaldo Cabrera back to left field. Given Peraza‘s elite defensive qualities and solid batting metrics during the regular season, the decision should be easy for Boone. While the sample size was small, Peraza hit .306 with a 40.4% on-base rate, including one homer and two RBIs across just 18 games. He was ramping up considerably down the stretch.

Another player, the Yankees, may consider adding to the ALCS roster is Ron Marinaccio. Marinaccio had a fantastic rookie season, earning a 2.05 ERA with 11.45 strikeouts per nine across 44 innings pitched. His 81.3% left-on-base rate and 41.5% ground ball rate suggest he is a great option out of the bullpen, despite dealing with a lower leg injury that has kept him out for a few weeks.

Marinaccio could end up replacing Leutge or Clarke Schmidt, preferring to keep Jameson Taillon and Domingo Germán. However, there is an argument to make that Montas could replace German and Marinaccio could take the spot of Miguel Castro. Boone has a few big decisions to make, undoubtedly, but the Yankees have some integral pieces to the puzzle returning from injury that can make an impact against Houston.