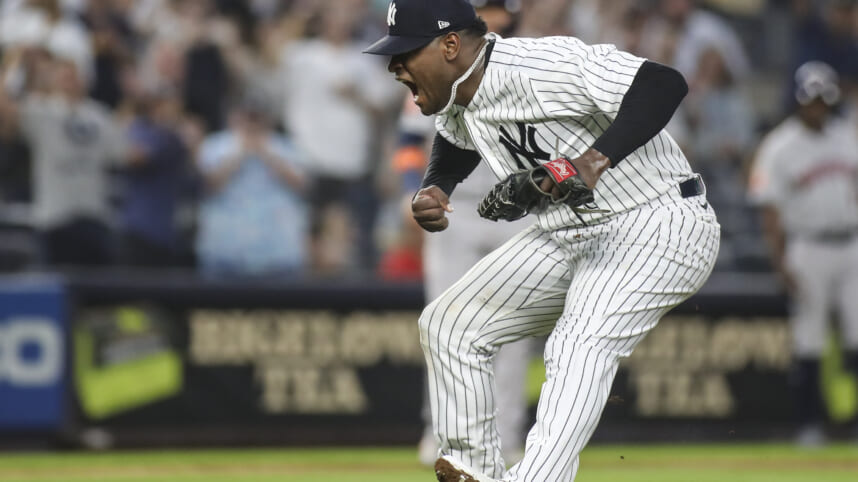 As the Yankees rolled into the new year in 2020, they received the devastating news that their young ace Luis Severino would need Tommy John Surgery. Unbeknownst to many, Luis Severino wouldn’t throw another pitch at the Major League level until September of 2021. It seemed as if perhaps Luis Severino was an afterthought, someone that just wasn’t going to ever reach the heights he did between 2017-2018.

There were plenty of valid concerns about Severino coming into 2022, most notably that he hadn’t started for the Yankees since 2019, and he had just 18 innings of MLB work over the previous three seasons leading up to 2022.

While Severino was only able to make 19 starts in 2022, it’s safe to say he silenced the doubters who thought he may not be able to be the strikeout machine he was in years past, but in 2023 Luis Severino isn’t just trying to prove he’s still a viable starter. Next year is about domination for the Dominican fireballer, and he showed signs of being even better than he was before TJS.

Best Fastball Performance of His Career:

Luis Severino’s velocity on his fastball was a tick down from his 2017-2018 days, averaging 96.3 MPH compared to the 97.5 and 97.6 MPH averages in the 2017 and 2018 seasons. Despite this, Luis Severino had set career highs over a full season for his fastball in a myriad of categories for his fastball, something you don’t typically see with lowered velocity. A dramatic change for how hitters fared against his fastball came with left-handed batters, as the results in 2022 drastically differ from the ones we saw previous from 2017-2018.

The dramatic difference in results seems to tie to the launch angle against changing, as the higher launch angle means more flyballs, and for a high-octane fastball like Severino’s, typically that means opposite field flyballs, the worst kind for hitters. Batters as a whole registered just a .186 AVG and .275 wOBA against Severino’s fastball, giving him a -11 Run-Value for the pitch. Run-Value is a metric that looks at the run impact adjusted for the situation in terms of runners on, the count, and outs in a particular event. His fastball ranked 26th among all fastballs, making it one of the premier heaters in baseball.

His fastball velocity started to worsen as the season went on, and when he hit the IL after a disastrous start against the Reds on July 13th, he had averaged just 94 MPH on his fastball. He’d have an extended IL stint as the Yankees wanted to avoid any chance for Severino to re-injure himself before the postseason, but Severino came back firing. The velocity on his fastball in his final five starts (regular and postseason) was 97.3 MPH, using it a whopping 58.1% of the time in those starts. Batters had just a .218 wOBA against this higher-velocity fastball, and Luis Severino dazzled in those starts to the tune of a 3.00 ERA and 27.9% K%.

Severino seems to have figured out better command/usage of his fastball, and if he’s able to sustain the velocity increase we saw after returning from injury, this could be one of the best fastballs in baseball.

Luis Severino started the season as a Four-Seam/Cutter/Changeup pitcher, using his slider under 7% of the time in his first two starts. His cutter is a strong pitch, but the slider has always been Luis Severino’s bread-and-butter. Through his first seven starts, Severino’s slider took a backseat to the changeup as the slider was a tertiary pitch instead of a secondary. The results showed that style wasn’t working for Severino, and it’s also plausible that the slider that, was his best weapon, also put the most stress on his arm. Perhaps it was a way to protect Severino from himself by easing himself into using the slider more, but when he began using it more, he immediately found great success.

Improvements across the board in run prevention, K-BB rates, and groundball rates are good evidence to help us conclude his slider should be the secondary pitch of choice for Severino. Severino’s Stuff+ also improved when he made this shift in pitch usage, with his Stuff+ after his 7th start increases from 108.2 to 112.1 by the end of the season. His slider was in an elite class of sliders in terms of results and strikeout capabilities, ranking 8th in K% for sliders and 13th in Run-Value per 100 pitches (minimum 100 PAs).

His vintage sweeping slider is a pitch that will always play a huge role in what he does, but the cutter he threw in place of it for a while showed a lot of promising qualities. If Severino takes a leap in 2023, perhaps that cut-fastball is part of the equation.

The cutter Luis Severino threw in 2022 was truly an elite pitch by many metrics. The velocity range on the pitch varied, throwing some cutters at 95 MPH but also throwing a Cutter at 85 MPH. A wide range of velocity also came with a wide range of movement profiles, throwing the harder cutters with less drop and run, while the slower cutters came with more visible movement. It registered a whopping 123.1 Stuff+, making it a truly elite pitch in terms of velocity, movement, and spin rates, though subpar command (99 Location+) gave it a solid but not elite 104.4 Pitching+. It’s certainly a pitch worth exploring, especially considering batters hit .200 with a .297 wOBA on the pitch and whiff 40.6% of the time on the pitch.

It did have a +1 Run Value, meaning it’s probably not the best pitch to use later in counts, but as a show-pitch it does an excellent job. This cutter also bridges the horizontal movement profiles between his fastball and slider, which could promote an increase in chases in 2023. Severino ranked in the 22nd Percentile in Chase Rate, so what if using the cutter more prominently to set up the slider created the added deception needed to generate more chases?

When he used the cutter a lot in his first four starts, he had generated a 35.3% Out-of-Zone Swing%, but he cut his cutter usage from 14.4% in half to 7.2%, and batters had a 30.5% Out-of-Zone Swing%. This is a small sample, but that ability to spin the baseball down and away and disrupt batters sitting on a four-seam or slider could play to his benefit for entering more 2-strike counts where batters tend to expand the strike zone more often.

Establishing a different look for Severino could provide great results for him, and we could see Severino become the best version of himself as he polishes the finesse for his game. The stuff is always going to be elite, but in a game that has improved with data and information, constantly adapting and making adjustment is a must.

What to Expect From Luis Severino in 2023:

Steamer projects Severino for a 3.56 ERA and 3.55 FIP, ranking him 27th for projected ERA and 30th for projected FIP among starters. This baseline of being a top 30 starter in the sport is a strong place to start from, and I think Severino can reach the upper percentiles of his potential outcomes. With returning velocity, his slider back in form, and his new cutter, we could see the best version of Luis Severino we’ve ever seen. It’s not far-fetched to say that in terms of “pitching” as a skill, Severino’s come a long way from the pitcher he was before surgery. Having worse stuff meant he had to learn how to command more effectively and sequence better, but with those skills in tandem with stuff reminiscent of his 2017-2018 days, it could get scary for opposing batters.

The big variable here is health, how many starts can the Yankees expect from Severino in 2023? Steamer projects him for 26 starts, giving him 145 IP on his slate. If Severino can get to 30 starts completely healthy, we might see him in the Cy Young conversation. We just saw 39-year-old Justin Verlander accomplish the feat after returning from TJS, so why not Severino? He won’t be the betting favorite, and some would say he’s not even top 2 in his own rotation, but don’t completely write off the idea that he puts everything together. With his talent, his passion, and just a little bit of luck, Luis Severino can return to being one of the aces of the American League once again.