How much would the Yankees have to pay to land superstar pitcher Justin Verlander? 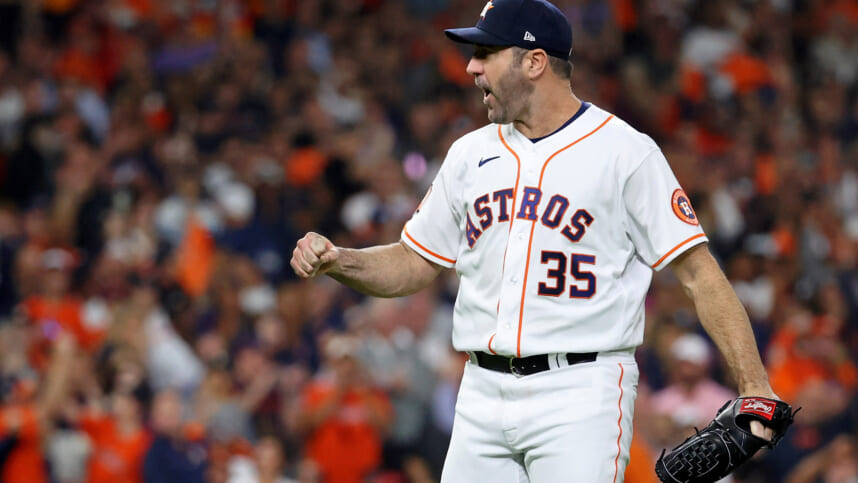 The New York Yankees are looking to make a splash in free agency. Aside from retaining Aaron Judge, landing superstar pitcher Justin Verlander would give them a massive competitive edge. In fact, injecting Verlander into their existing starting rotation might make it the best in baseball.

However, landing the expected Cy Young Award winner this season will be difficult, especially after Houston owner Jim Crane dropped his expected price tag at the GM meetings this week.

According to Brian McTaggart of MLB.com, Verlander is looking for a monster deal:

Crane said Verlander is seeking a deal similar to Max Scherzer, who signed a three-year, $130 million contract with the Mets a year ago. Crane said he hopes the absence of a state income tax in Texas will give the Astros an edge.

Yankees owner Hal Steinbrenner might’ve been willing to cough up $30 million per year for two seasons to land one of the league’s best starters, but paying $43.3 million per over three years is simply over the top. There likely won’t be a team willing to go that far for a 39-year-old starter that was just beaten up in the postseason.

The Yankees would be getting pure quality in Justin Verlander:

Verlander‘s numbers during the regular season, though, were simply elite. Over 175 innings following Tommy John surgery in 2021, he posted a 1.75 ERA, 3.23 xFIP, 9.51 strikeouts per nine, and an 80.5% left-on-base rate. He was simply electric, featuring his lowest HR/FB ratio at 6.2% since the 2010 season with the Detroit Tigers.

However, being stuck on a massive deal when Verlander eventually struggles with father time is not an ideal scenario. An attractive option for the Yankees might be a two-year deal, including a player option at a slightly higher price point than the contract he signed last off-season. Maybe a two-year, $65-million deal would get it done, locking the Yankees into a high price point but for a short amount of time so they can move on without being bogged down in the future.

Nonetheless, if the former Houston Astro is committed to a Max Scherzer-type of deal, the Yankees won’t even be sniffing his free agency desires.