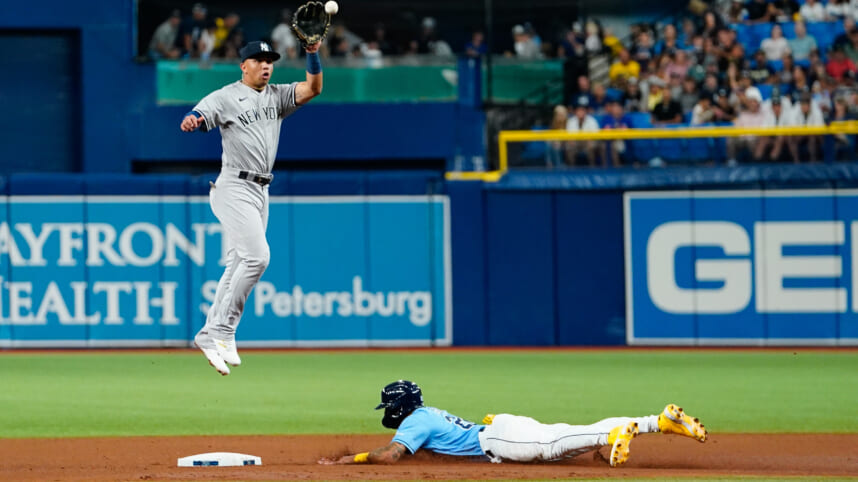 The New York Yankees are gearing up for Game 2 of the ALCS on Thursday evening after falling in Game 1 to the Houston Astros. Manager Aaron Boone has shaken up the roster quite a bit over the past few days, benching shortstop Isiah Kiner-Falefa, shifting Oswaldo Cabrera to the vacancy, and utilizing Aaron Hicks in left field.

However, with Hicks spraining his left knee, and being ruled out for the remainder of the postseason, Boone elected to feature Giancarlo Stanton in left, despite concerns about his Achilles tendinitis issue that bothered him earlier in the year.

It is unlikely that Stanton plays the outfield two days in a row, meaning the lineup could shift once again. The expectation is that Oswaldo Cabrera will feature in left given his switch-hitting bat against Framber Valdez on Thursday, but retaining IKF at short may not be the most efficient move.

Alternatively, rookie Oswald Peraza could get the call given his defensive qualities and strong ending to the regular season in the batter’s box. There’s a strong argument to make that IKF should shift over to the hot corner, since Josh Donaldson has looked awful over the last four games, striking out nine times and walking just once with two hits.

He started the postseason on a high note, but his efficiency has quickly regressed to a point where a conversation needs to be hard about his usage.

The ideal changes the Yankees can make:

Ideally, Peraza will feature as short, IKF at third, where he’s won a Gold Glove in his career, and Cabrera out in left field. That would allow Giancarlo to swap back into the designated hitter role and Matt Carpenter to ride the pine after striking out six times in his first six at-bats after two months off from baseball activity.

In a perfect world, the Yankees wouldn’t have to be replacing infielders at an astronomical rate, but they simply aren’t getting reasonable value out of the third base or shortstop positions, so taking risks and relying on a useful spark might be the best move. After all, Houston has rookie Jeremy Peña playing shortstop in their own infield.