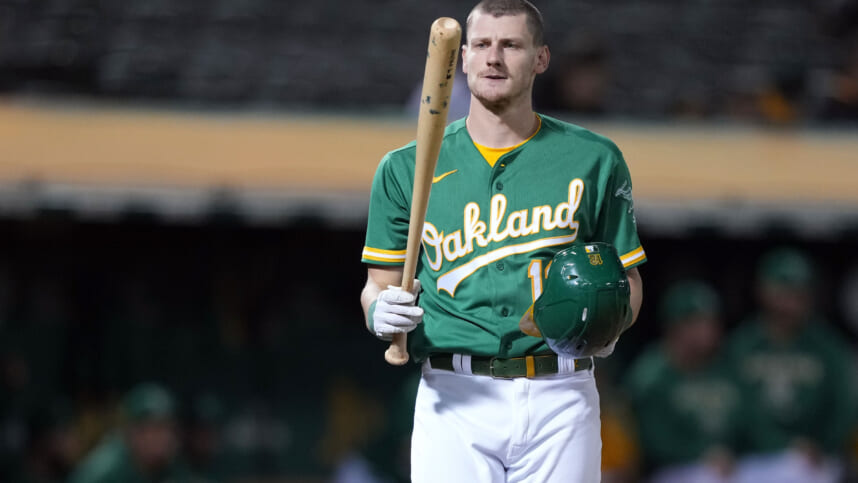 The Yankees had one of the best catching groups in baseball in 2022. They finished 4th in fWAR and 1st in FRM, but they lacked offensively, finishing middle of the pack in wRC+. While you can certainly sacrifice offense at the catching position for elite defense, what if you could get both?

The Oakland Athletics are still in the middle of their rebuild, but they happen to have one of the best catchers in the entire sport. Sean Murphy just finished putting together a season where he finished with a 5.1 fWAR, 122 wRC+, and 8.1 Fielding Runs Above Average. He was one of three catchers to finish with an fWAR above 5, and he’s been a model of consistency at the position since 2020. With the Yankees needing an offensive facelift, could Murphy be the catcher of the future in the Bronx?

Sean Murphy posted a 122 wRC+ and clubbed 18 HRs in 148 games in 2022, but those numbers feel low for where Murphy’s power and plate discipline are. Murphy topped out at 114.0 MPH for his Max Exit Velocity, placing him in the 94th Percentile, and with a Barrel% in the 73rd percentile, he should have more HR power, right?

Well, Murphy has never topped 18 HRs in his career, but that could be due to the cavernous ballpark that is the Oakland Coliseum. His home-road splits are drastic and present the chance for him to be a far better bat if he were to play in the HR-friendly AL East.

The notable metric to look at here is HR/FB%, as we see that Murphy’s flyballs are finding the seats more in other ballparks, potentially due to more favorable fences for hitters. We also have evidence of this with Statcast’s Expected HRs by Park, as it has 20 HRs for Sean Murphy at Yankee Stadium as opposed to the 18, he hit this season. While 2 HRs may seem like a small difference, that can be the difference between a 122 wRC+ and a near 130 wRC+, which can have a big impact on a player’s WAR. It’s not like you’re paying for what Murphy could be in the Bronx, rather what he already has proven to be. The power is undeniable, but in 2022 Murphy displayed much better plate discipline as well.

Seeing positive trends in a player’s ability to make contact while not sacrificing power is a great sign, and Murphy’s displayed that the tools are all there for him to hit ~.250 but slug near .500 at the same time. For the Yankees, having another bat in the lineup that could club over 20 HRs is vital, especially when they can do so without having massive whiff concerns.

The big concern with any catching change is the defense, you cannot take a step back defensively after last season. Jose Trevino won the AL Gold Glove after one of the best defensive seasons you’ll ever see by a catcher. Kyle Higashioka was also a great defender as well, and if he played a full season would most likely have gotten a Gold Glove nomination. Not too far behind is Sean Murphy, who, since entering the league, has been one of the best defensive catchers in the sport. Since 2020, Murphy has posted elite numbers behind the dish, continuing the Yankees’ excellence defensively at catcher.

Sean Murphy also has an elite pop time, slotting in at the 96th Percentile with a 1.89 Pop Time. He also has a rocket arm, averaging 86.1 MPH on throws (10th), giving him elite defensive tools that helped him cut down over 30% of baserunners who tried to run on him. With the bigger bases in 2023, teams are going to try to steal more than ever, and Murphy far exceeds Jose Trevino and Kyle Higashioka in controlling the run game.

This isn’t to say he’s better than Jose Trevino defensively (no one is), but it is to say he can definitely match Higashioka’s defensive value, and that would keep the Yankees from losing defensive value at the position.

What About Jose Trevino?

Jose Trevino was great in 2022, posting a 3.7 fWAR while coming up with many clutch hits throughout the season. Trading for Sean Murphy is upgrading from Jose Trevino, but he’s still an important part of the roster if they acquire Murphy. Kyle Higashioka played 83 games in 2022 despite being the backup, and with injuries always being a factor, Murphy could slot in at DH for stretches and let Trevino take over at catcher. Giancarlo Stanton has had an IL stint every season since 2019, it’s foolish to assume that he’s going to play 162 games for the Yankees. If Stanton is to play ~125 games in 2023, that’s at least 30 games where Murphy can act as the DH while Trevino catches. Unlike with Higashioka (or Trevino), Murphy can hit enough to want him in the lineup even on days he isn’t catching.

Jose Trevino could very well still catch ~85 games for the Yankees in 2022, which would only cut his playing time down by 30 games. He’d be someone, I imagine also allows the Yankees to pinch-run Murphy late in games more willingly since Trevino can hold his own at the plate and is an elite defender who can come in as the defensive substitution. Not to put Kyle Higashioka down, but it was a defensive and offensive upgrade in many cases when he came into a game to replace Trevino. The idea isn’t to cast Trevino off to the side, rather to have a catcher you can slot into the middle of your lineup.

What Would the Yankees Have to Trade for Sean Murphy?

The price tag for Murphy is going to be large, as Murphy has three years of control remaining. He’s 2nd in fWAR among catchers since 2020, and catcher is a position you rarely see offensive at. With that in mind, the Yankees would have to look at the top of their farm to start a deal. Oswald Peraza stands out as the infielder in the Yankee organization that has the most value outside of Volpe, and he’s probably expendable. Anthony Volpe looks to take the mantle as the SS of the future, and he’s knocking at the door. Cabrera could fill-in at SS as a “stopgap” until Volpe is ready, thus allowing the Yankees to acquire Sean Murphy. One player isn’t enough, however, so let’s try to surround Oswald Peraza with the right prospects to make a fair deal.

This is a rather steep price to pay, and Oakland could realistically ask for more, so the question becomes if it’s worth it for the Yankees or not. Personally, I believe Murphy is a great option for the Yankees to trade for, but only if they’ve already secured all other positions of need. They need to bring back Judge, re-sign Rizzo, find a LF, and secure their infield all before they should look at catcher. You could also argue a SP would be a better splurge for the Yankees, as it would give them one of the best rotations in franchise history if they acquired a frontline starter (like Justin Verlander). Murphy is an elite player, and that should be enough to entice the Yankees, however, it’s not something I believe the Yankees will or should prioritize.

I’d be ecstatic if the Yankees landed Sean Murphy, and he’s someone who’d greatly help this team, but my verdict is that the Yankees should view him as a luxury, not a necessity.