New York Yankees: Under .500, what’s ahead for the Yankees? 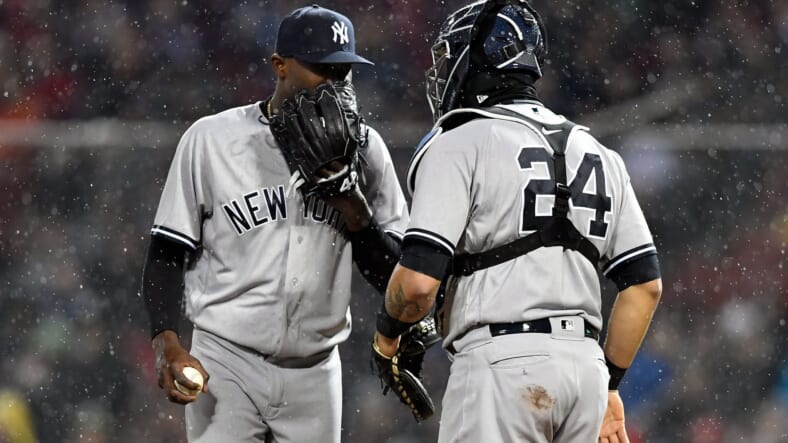 After yesterday’s loss to the Tampa Bay Rays, the New York Yankees sit one game below .500 in the AL East. The Baltimore Orioles and the Boston Red Sox are ahead of the Yankees in the division. Of course, this is very early in the season and is not significant, but it is concerning because the Yankees suffer from some issues early on.

On the pitching side, the bright spot is Jordan Montgomery that was totally dominant in his first start of the season. He pitched six scoreless innings in his win with strikeouts, walking none. Yankee ace Gerrit Cole although he has not been totally dominant, is 1-0 in two starts and 12.1 innings with 21 strikeouts. The Yankees have to be very happy with that.

On the unfortunate side of the issue is Domingo German that was the New York Yankees’ best pitcher in the spring. He was so good that the Yankees moved him up from competing for the anchor spot to the number three starter rotation. He bombed big time in his one and only start so far, giving up 3 runs in three innings of work; he has an ERA of 9.00. 2 time Cy Young Award winner Corey Kluber has only been able to pitch 6.1 innings across two relatively shaky games. His ERA sits at 5.68. He has one loss against two wins. German will get a chance to rebound today.

Jameson Taillon’s verdict is still out, and a clear picture of how he will do in the season remains unknown. He has pitched satisfactorily. He has no record but carries a 3.86 ERA. If that is the worst ERA of the season, the Yankees will be quite happy they traded for him from the Pirates.

The New York Yankee bullpen is a mixed bag. Jonathan Loaisiga is the star of the bullpen; pitching in three games, he has an ERA of 0.00 with five strikeouts. Loaisiga was the best reliever in the spring as well. Chad Green, Darren O’Day, Luis Cessa, and Michael King have all performed well, giving up no runs. The bad has been really bad. Lucas Luetge that turned heads in the spring, gave up 2 home runs, raising his ERA to 7.20 over 3 games. Yesterday Nick Nelson imploded, giving up 5 runs in 2.1 innings after having two successful starts.

Consistent hitting by Yankee players continues to be an issue. For the most part, they are potent or silent. Most industry insiders say you need to average 5 runs a game to win consistently. After seven games, the Yankees are scoring 4.2 runs per game. The only reason that it is that high is that they blew out the Orioles in two games.

Bright spots in the lineup are Brett Gardner; he leads the team in batting average (.400) 4 hits in 10 appearances. Giancarlo Stanton who has had a Grand Slam. He also has had 6 hits, one a double, and has driven in the most runs (7). DJ LeMahieu, after a slow start, has played well in the last couple of games, raising his batting average to .310. Aaron Judge has gotten off to a hot start hitting .364 with two homers. However, he hasn’t played in the last two games due to left side soreness.

Aaron Hicks, Jay Bruce, and Clint Frazier have gotten off to very slow starts during the first seven games. Hicks hit a home run yesterday, but the normal patient hitter leads the team in strikeouts (10). Manager Aaron Boone continues to slot him in the 3 spot in the lineup. In an already controversial placement, most Yankee social media fans think he should anchor the lineup. Jay Bruce, not being defensively good at first base, is also not hitting (.125). Clint Frazier is hitting just .200 while being second in strikeouts. Gio Urshela and Gleyber Torres are playing average ball.

This writer realized this is a supercritical look at a tiny sample of games, but at the same time, it tells why the New York Yankees are under .500 after seven games. Considering this is a 162 game season and starters’ innings have to be watched carefully, Boone needs to pull starters quickly when they start to fail and turn it over to the bullpen, especially with how well Loaisiga is pitching and the return of Justin Wilson. If hitters were hitting consistently and scoring a lot of runs, this would not be necessary.

The bottom line as we advance is that the Yankees must hit better and more consistently to get to a division win or the postseason. If the Yankees can keep both Aaron Judge and Giancarlo Stanton healthy and on the field, the Yankees will score runs. In the past two seasons, including this season, the Yankees are 10-2 when both were in the game. The good news for today is that Aaron Judge and Gio Urshela will be available to play.