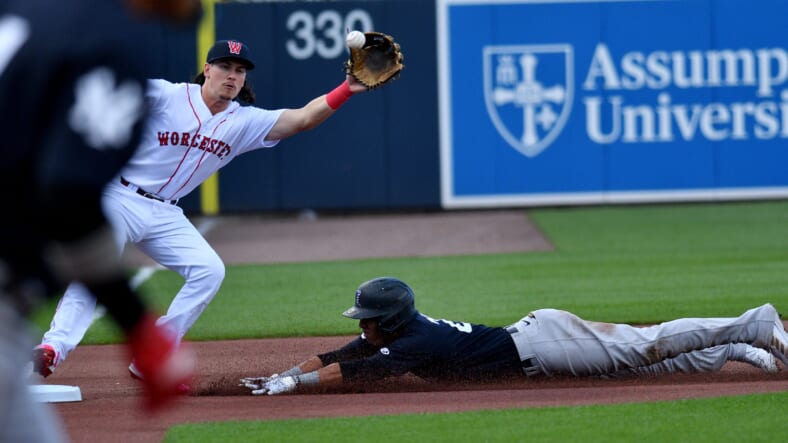 WORCESTER - WooSox Ryan Fitzgerald couldn't quite get the out on third base stealing Oswald Peraza as the Worcester Red Sox play Scranton/Wilkes-Barre at Polar Park on Wednesday. Spt Woosox Sale8 0707

There is a strong argument to make that the New York Yankees should pull up star shortstop prospect Oswald Peraza to compete with Isiah Kiner-Falefa. General manager Brian Cashman doubled down over the weekend, indicating that they’ve been supremely impressed with Kiner-Falefa’s defense this season, despite 11 errors and a .967 fielding percentage at the position over 827.1 innings this year.

“It was a challenge finding a SS last winter and we found a Gold Glove in IKF, his defense has been tremendous for us, he is a grinder, Correa opened an opportunity that imported JD and IKF,” Cashman said on MLB Network this morning.

IKF features an 84 wRC+, indicating he’s 16% worse than the average player. While his defense isn’t his worst variable, his offensive production this season has been next to nothing. While he does host a .274 batting average with a 32% on-base rate, he’s failed to hit a homerun and has struggled with runners in scoring position the past few weeks.

The Yankees are watching Peraza dominate but refuse to use him:

On the other hand, Peraza is hitting .259 this year with a 33% on-base rate, but his past two months have been elite at the Triple-A level. In July, Peraza hit .300 with a 37% on-base rate, including five homers and 15 RBIs. If you think that’s good, let’s take a look at his June statistics.

In fact, Peraza has started off August with five hits in four games, including a homer and three RBIs. Recording 15 homers on the season, he clearly has substantial power that can help the Yankees immediately.

Defensively, Peraza has been solid, earning a .974 fielding percentage with seven errors over 626.1 innings. He’s turned 43 double plays this season for Scranton, showcasing his readiness to jump to the next level.

While fans continue to clamor on about IKF’s deficiencies and advocate for Peraza’s elevation, the young prospect suffered a hand injury on Sunday afternoon after being plunked by a wayward pitch.

According to Railriders beat writer Conor Foley, Peraza was taken for x-rays following being hit on the hand by a pitch on Sunday afternoon.

Peraza wasn’t feeling substantial pain, but the team was being extra cautious after being hit on the back of the hand, which could do serious damage.

If Peraza suffers a legitimate injury, the Yankees will be kicking themselves for not bringing him up, but if he dodged a bullet, they need to elevate him sooner rather than later.